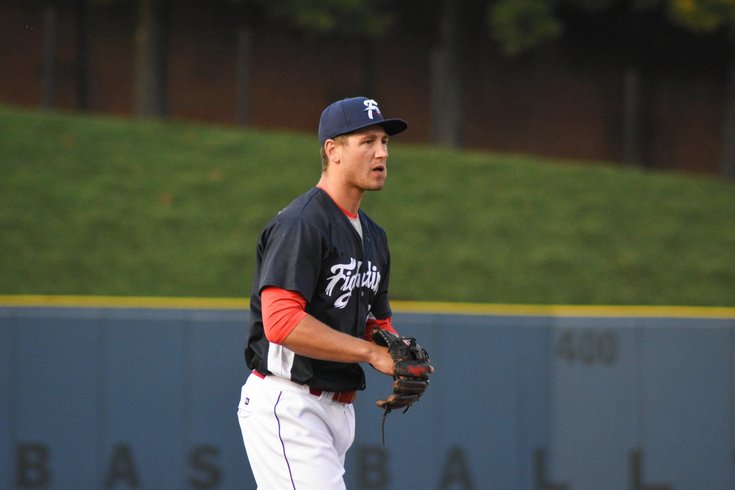 Reading Fightin Phils third baseman and former Phillies fifth-round pick Mitch Walding has an Eastern League-best 20 home runs at the All-Star break.Walding's 20 home runs are two more than Scott Kingery hit in Reading prior to his promotion – in 20 fewer at-bats than Kingery had, too.

But if you would have told him two years ago that he’d be leading the Eastern League in home runs and tapped as a top seed for the league’s Home Run Derby at the All-Star Game, he would have probably thought you were giving him a hard time. The left-handed hitting third baseman had four home runs in 461 plate appearances over 120 games in 2015 at Class A Clearwater, one level below the Eastern League.

Walding had 13 home runs, total, in 412 games between Williamsport, Lakewood, and Clearwater in his first four seasons in professional ball.

So what happened in his fifth and sixth minor league season? Walding hit 13 homers to go alongside a .269/.366/.429 slash line in 123 games between Clearwater and Reading last year.

“Early on in my career I was always kind of an opposite field hitter, it’s the way the swing was when I was in high school,” Walding explained Thursday afternoon in Trenton, where Reading was set to wrap up a series. “I never really knew how to truly pull a baseball, like a hard fastball, I didn’t know how to pull the ball or attack it correctly. It wasn’t until the end of 2015 when I started working with (hitting coaches) Andy Tracy and Rob Ducey on how to pull a fastball the right way.

“That’s when I started to hit for more power, hitting more home runs, things started to turn around for me a little bit better. So I just had to fine-tune that swing. Basically getting the bat head out in front. I think that was a changing point in my career.”

For professional hitters, success fuels confidence, which, in turn, can sustain success. It’s the mindset often referred to in sports circles as being in the zone.

“He got a couple (of home runs) early in (June, a couple games of a couple,” Reading hitting coach John Mizerock said. “Hit a couple of them in Akron, sort of out of nowhere, maybe two days later a couple more. And he started feeling good about himself… and soon three becomes four and four became five, a couple more hits and then another one, then Player of the Week honors and you’re feeling pretty good and the next week starts out pretty good and you stay hot for a month. … In this day in age with everything being some quantifiable or numbers oriented, it’s a tough one to figure out. You watch his video from April, May, and June, throw it in a hat, you’re not going to know which one June was. It looks (the same), very minimal mechanical adjustments, not enough to make 13 home runs.

“It’s how he’s feeling about himself, how he’s walking up to the plate. You can’t put your finger on it. I’m sure someone will … there’s some gadget they’ll put on you to (grade) the positive aura coming off. But whatever it is, I’d like to do a test on him now. A couple weeks from now he goes into a slump I’ll ask him to remember June. I don’t know, what you had for lunch, how many cars you passed on the way in (to the ballpark). Try it again, dude. It worked then, no reason it can’t work again.”

Walding, who advanced to the second round of the Eastern League’s Home Run Derby on Tuesday night in Manchester, N.H., is one of five Reading players who will represent the organization in the league’s All-Star Game tonight, along with outfielders Carlos Tocci and Jiandido Tromp and pitchers Drew Anderson and Yacksel Rios.

“Nobody works harder than Mitch,” Reading manager Greg Legg said. “He’s in the cage first every day, unless (Mizerock) makes him come in later. His work ethic is off the charts, so I couldn’t be happier, couldn’t be happening to a better young man.

“I’ve been fortunate enough to watch his development over the years and right now he’s just in a really good place. He’s confident, he knows he can do damage. And as time goes on, I look for him to hit another five or six this month and possibly another six to nine in August. And when you put those numbers together we should be somewhere in the 30s, and it’d be a helluva year for him.”

The Reading Fightin’ Phils lost their most two prolific hitters to promotions within the last month, with Andrew Pullin and Scott Kingery now a part of the prospect-laden lineup at Triple-A Lehigh Valley. But thanks to Walding’s power surge and the consistent productivity of Tocci, Reading has remained the second-best team in the Eastern League (going 12-8 in 20 games since Pullin’s promotion three weeks ago).

Walding’s monster June, along with his maturity as a hitter in the last two seasons, has obviously played a part.

But there was something else that triggered his bat and tapped into his talent: a visit to Citizens Bank Park before the start of the 2016 season. Walding was one of 19 Phillies prospects who got into the Phillies Futures Game two days before the big league club’s Opening Day last year.

“That was a big moment for me, everything started to set in, realizing how close you really are,” Walding said. “The atmosphere you want to be in, as big leaguer. I’ve always wanted that obviously, but once you step foot in that clubhouse and that field, that’s when it really sets in, what your dream actually is. We got on a flight, all of the guys, and it was to the nines as an experience. It was unbelievable.

“And I think that's when it really set in with me, how close (you are), and how bad you really want it. Obviously, I look forward to going up each level and one day getting to the big leagues. I believe in myself that I’ll definitely be there at some point, whenever that may be. But as far as right now, I’m just focused on getting better every single day and helping my team win, becoming the best player I can be to one day get there.”