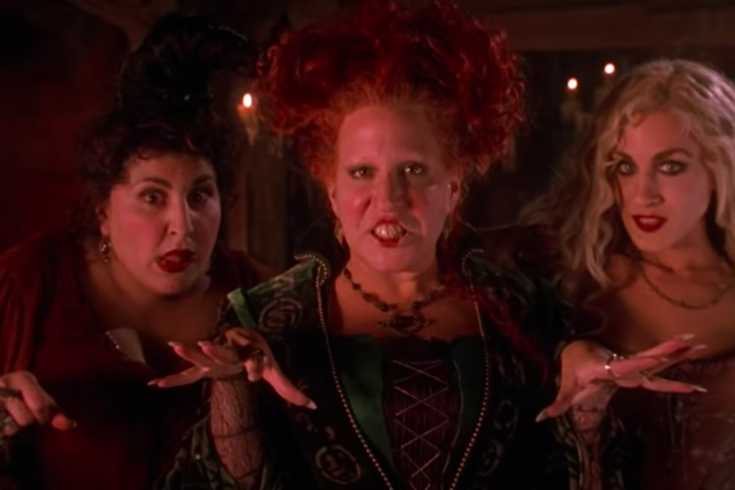 'Hocus Pocus' debuted in 1993 and has become a Halloween classic. This fall, those in Philly can watch the movie on the big screen outside the Bourse.

I suggest you form a calming circle. "Hocus Pocus" will be screened outdoors in Philly on five nights this October.

There will be a 16-foot projector on the patio at the Bourse in Old City set up for the movie nights.

Tickets for the five showings are available online. The price is $20 per table, with tables seating up to four people.

The 1993 movie starring Bette Midler, Sarah Jessica Parker and Kathy Najimy as the Sanderson sisters is a must-watch leading up to Halloween, no matter how many times you've seen it before.

The film about a trio of witches who are accidentally resurrected by a teenage boy in Salem, Massachusetts, has a huge fan base, which has led to tons of "Hocus Pocus"-themed merchandise, from home goods to wine. And the movie's iconic lines are endlessly quotable.

With so many fans out there, it's a good thing there are multiple screenings of the movie.

"Hocus Pocus" will be shown on Friday nights from Oct. 2 through Oct. 31 at 7 p.m., but ticket-holders are encouraged to arrive early at 6 p.m. to purchase food and drink from the food hall vendors before the movie.

Treats for sale include the Witch's Cauldron from Scoop DeVille, which is black ice cream with Oreo; the Hangover Soup from Prescription Chicken, made with extra spice to ward off "zombies, witches and old boyfriends;" and Sanderson Seltzers, aka hard seltzers.

When attending the event, attendees must wear masks unless seated at a table. The Bourse is located at 111 S. Independence Mall E. The Bourse's parking garage is located on Ranstead Street, just off of Fourth Street.