After one fraudulent fundraiser, everyone is on higher alert – including donors 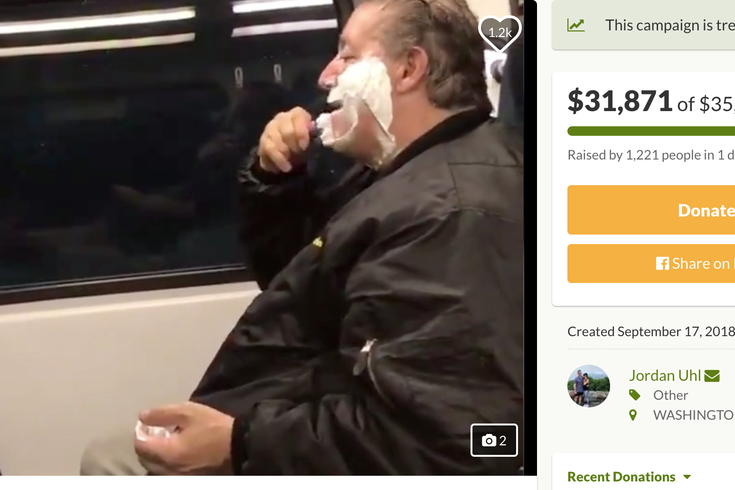 The campaign for Anthony Torres has more than surpassed Jordan Uhl's expectations.

In August, the tale of a GoFundMe-gone-wrong made more than a few headlines. A New Jersey couple crowdfunded $400,000 for a homeless man, then the accusations began to fly that the money had been squandered on drugs, luxury cars, and lavish trips.

So while that case continues to be investigated a new GoFundMe has been started, also originating in New Jersey and also intent on helping a homeless man. The campaign began gaining steam in mid-September and plenty of people were understandably skeptical.

The odds of back-to-back viral crowdfunding campaigns, for similar causes, in the same state ending in fraud are low. But, fresh off the deception of the Johnny Bobbitt case, why would anyone be willing to take that chance?

Jordan Uhl, a Washington, D.C. resident, found himself wanting to help Anthony Torres, the homeless man who was filmed shaving while traveling on a NJ Transit train — and subsequently mocked when the video was posted to the internet.

“I’d sent the link from the Associated Press story to a few buddies in a direct message group, and I was just like, ‘Do you think we could raise money for this guy?’” Uhl told PhillyVoice on Wednesday. Uhl said he’d seen plenty of online fundraisers try and fail before. He set the goal at $10,000, which he thought would be tough, but doable.

It hasn’t been all smooth sailing, though. Those doubts from prospective donators? They began almost immediately.

And there's now a GoFundMe for Anthony that has raised over $20k. https://t.co/CGbh0OljHC

Pardon my cynicism but this is the exact same stuff those grifters in Philly said about their $400,000 gofundme.

I just checked and I’m glad this is going to the man himself, I really hope this isn’t like that last one 😞 https://t.co/74Fw0qqvzz

“People were probably skittish and a little worried about donating,” Uhl said. “A lot of people quote-tweeted my tweet and shared the link, reminding people of (the Bobbitt case). I tried to be really diligent in replying to all these people and saying, ‘Alright, they might have done that, but I’m not.’”

It won't, because I've already worked with GoFundMe to transfer the control of funds over to him and his brother.

Ian should reach out to the family, who will let him know how quickly I got in touch with them to transfer control for withdrawals of funds. I would encourage it to assuage his cynicism.

His family is in control of the GoFundMe donations. All I did was set it up.

It also seems like GoFundMe, which typically has taken a hands-off approach to its website’s fundraisers in the past, might have made some internal changes after the Bobbitt debacle. Uhl said GoFundMe reached out to him within the hour after he set up his campaign and it had started to gain traction.

“They reached out to me to verify, with proof, that I was trying to reach out to the family,” Uhl said. He was; Uhl said he had already asked the Associated Press reporter for contact information of the Torres family, and spoken to Torres' brother multiple times.

Uhl also said there would have been no way he could’ve taken the money, even if he’d wanted to. GoFundMe had locked withdrawals until Uhl was able to establish one of Torres, one of the homeless man's family members or a facility that helps homeless people like Torres as the recipient of the donations.

“I thought that was a good solution,” Uhl said, although he thinks it might help in the future if GoFundMe establishes some sort of verification system once it’s vetted a campaign, sort of like a Twitter blue check. Without that kind of stamp of approval, he said, it was just his word against anyone else’s in convincing potential donors that the money would end up with Torres.

So why did Uhl go out of his way to help Torres in the first place?

“I’m a member of Democratic Socialists of America,” Uhl explained. “At the end of the day, one of our core tenets is creating a world where nobody is in poverty, and everyone is taken care of. That’s what I believe in, that’s my world view.”

It seems — for now — this feel-good story has been handled better by all the parties involved.