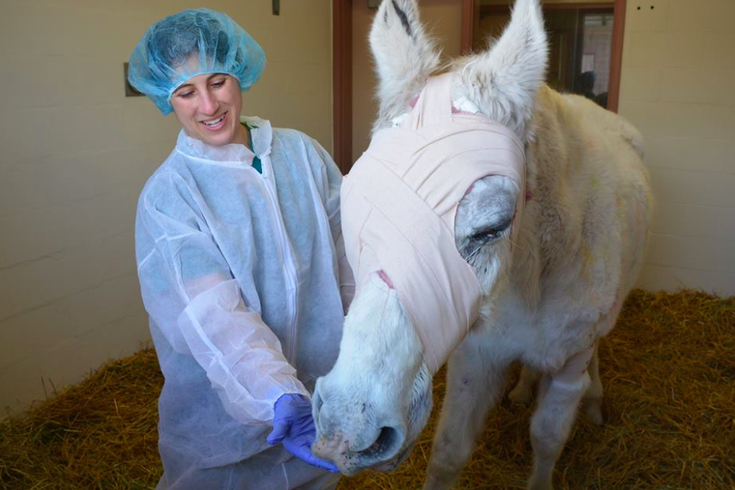 A horse found pelted with paintballs in Pennsylvania earlier this year is being taken in by former "Daily Show" host Jon Stewart.

Lily, a 20-year-old Arabian, was discovered abandoned, malnourished and abused at a stable in New Holland in March. She had been hit more than 130 times with a paintball gun.

Price transported Lily to the New Holland Sales Stable — an auction site where animals are typically slaughtered – from New Jersey, authorities said. Prosecutors said Friday Price has been convicted on all charges and has been ordered to pay $3,056 in fines and $10,178 in restitution.

Lily had to undergo extensive treatment under the care of Penn Vet specialists at the New Bolton Center in Kennett Square, including surgery to remove her right eye.

She was released to a rehabilitation stable in April and her condition has improved since then, authorities said Friday, and now it seems she'll have a loving home as well.

WGAL Lancaster reports that comedian Jon Stewart has adopted Lily, meaning she'll be joining the Stewart family, including Jon's wife Tracey Stewart, who used to be a veterinarian and is a noted animal rights activist.

After Stewart retired from "The Daily Show" in August 2015, it was reported he had purchased a farm for rescued animals in New Jersey.

An adamant lover of animals, Jon Stewart and his family already have a packed house at their Jersey abode, which includes four dogs, two pigs, two hamsters, three rabbits, two guinea pigs, one parrot, and two fish — all of whom are rescues.

Tracey Stewart released a book called "Do Unto Animals" last year. It delves into understanding animals and treating them with respect.

The Stewarts spoke more about their relationship with their many animals during an interview with "CBS This Morning" in October 2015. You can watch it below: