How banning the shift will impact the Phillies 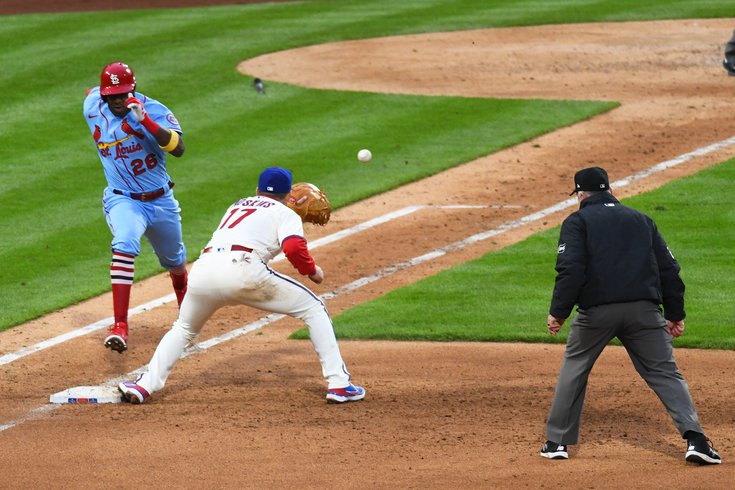 PHILADELPHIA, PA - APRIL 17: Rhys Hoskins #17 of the Philadelphia Phillies about to catch a double play ball during the game against the St. Louis Cardinals on April 17, 2021 at Citizens Bank Park in Philadelphia.

It seems less and less likely a deal will be struck between the players and owners in time for baseball anytime soon, but as the two parties continue to chat, we are slowly getting a sense of what a redefined game of baseball will probably look like whenever the two beleaguered sides emerge from their entrenchment.

Players union agreed to allow MLB to ban shifts, implement a pitch clock and make bases larger in 2023, subject to those agreements fitting into a total deal. Union also rejected Robo umps for ‘22/‘23. MLB goal: to be able to streamline the process and add excitement ti the game.

Reports are suggesting that the postseason will expand from 10 teams to either 12 or 14, that there will be some kind of pitch clock implemented (like that will do anything), the bases will be made larger and perhaps most interestingly, the league will ban the shift.

Longtime Phillies fans know full well what the shift can do, as it was leaned on successfully by defenses against Ryan Howard for years, taking away countless hits as the pull-hitting lefty seemed unable to adapt to the extra fielder between first and second base.

Starting in 2023, if reports are accurate, this practice will be a thing of the past. Is that a good or bad thing for Philadelphia?

Let's start on the defensive side of the diamond, where no team used the shift less than Joe Girardi's Phillies (thanks to Baseball Savant for the table below). 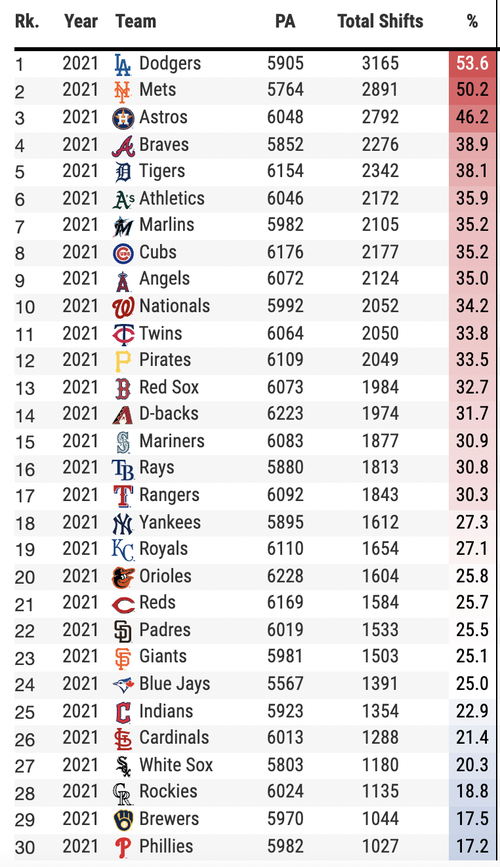 The average MLB team used the shift around 30% of the time. The Phillies, already hamstrung as one of baseball's worse defenses, relied on it just 17.2% of the time. Against lefties, they were also the least shifty team in the league using it just 25.6% of the time. For contrast, left-handed hitters facing the Astros in 2021 saw a shift more than 81% of their at bats.

This mentality sort of aligns with Girard's old school managing style, but also is a bad look for the Phillies in 2022, showing a lack of understanding or willingness to embrace analytics that suggest the shift is effective (at least against particular pull-hitting players).

Just last season, when the minor leagues announced they were experimenting with no shift, Girardi and a few Phillies players voiced their hope that it would expand to the majors. Here's a portion of a story written by NBC Sports Philadelphia's Corey Seidman last spring:

Major League Baseball will have its eyes on the new rules to gauge their effectiveness.

"Really, I'm anxious to see how it's going to work out, and I would love to see us get away from defensive shifting," Phillies manager Joe Girardi said. "I think it leads to more strikeouts actually because left-handed hitters get shifted a lot and they try to beat the shift by hitting it over the shift. When that happens, it leads to less action in our game and that's what we're all dying for, more action. I am curious to see how it works out."

Usage of the shift has surged and changed the sport. Take a look at the league-wide increase over the last four seasons. This is the percentage of plate appearances in which a hitter faced a shift with nobody on base.

Absent a rule change, that trend is not reversing. Teams have too much information. Perhaps over time, hitters can refine their bat-to-ball skills to beat the shift more often, but that's no overnight thing and it feels especially unlikely in the near future given the modern obsession with power and the differences in the way hitting is taught now.

It was interesting to hear Zack Wheeler, who induced the highest rate of groundball double plays in all of baseball last season, say he'd be fine with the shift being banned in the majors eventually.

"I haven't really been a fan of the shift so I couldn't care less what happens, honestly," he said Friday. "Sometimes it works, sometimes it doesn't. I love it when it's there, I hate it when they're out of position. I'm sure it'll be a couple years, if anything, before it would be up here." [NBCSP]

Girardi hates the shift and didn't really use it. Makes sense.

But what about on offense? Surely, the elimination of the shift will help a lefty hitter like Bryce Harper in 2023, right? Not necessarily.

According to Baseball Savant, Harper faced an infield shift on 68% of his at bats last season — the 86th highest rate for any hitter. And believe it or not, he was actually better with a shifted infield than he was against a conventional one. His wOBA (weighted on base average, which takes into account how a player reached base, not if) was .095 points higher against a shift (.462 vs. .367).

This stat passes the eye test. On more than a few occasions, an opportunistic Harper was more than willing to put down a bunt or slap a weak grounder the opposite way to get himself on base. Not every lefty is willing to or able to do that. His shifting (ha) attention without the shift could allow him to hit for more power.

Harper's teammate Rhys Hoskins was one of the most shifted right-handed hitters in 2021, facing it in 64.2% of his at bats — the sixth most of any righty. His wOBA against it was .361, and without it .365, an almost statistically insignificant difference.

Andrew Knapp, Didi, Gregorius and Brad Miller were the three other most shifted hitters (all lefties) last year, but none figures to be on the roster in 2023.

So the major impact of the banishment of the infield shift for the Phils seems to be that they'll be the happiest team, and the one that will need to adjust to it the least. Will that result in an advantage for them two seasons from now (if that reported aspect of the future CBA winds up accurate)? It's really hard to say. But there will certainly be other hitters who'll benefit greatly from being able to pull the ball, or hit a grounder up the middle without it being an easy groundout.

Hopefully the Phillies will see their batting average improve like the rest of the league like will when this change comes into play in 2023.