MLB rumors: Should the Phillies go after Freddie Freeman? 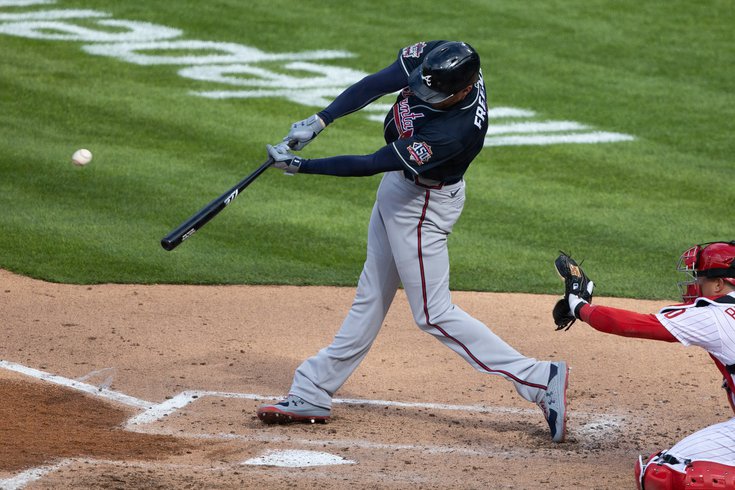 Is Freddie Freeman to the Phillies a complete pipe dream? Is it a fit at all?

As negotiations between MLB players and owners continue — with the hope that a deal will be struck in time to save an on-time start to the 2022 season — the Phillies' front office is no doubt planning what to do when a fury of activity commences once the offseason resumes.

And while the needs of the team remain at pitching, shortstop and in the outfield, the team reads the same things we do and they have to be at least a little intrigued by a name that wasn't really expected to be available.

The 2020 NL MVP and five-time All-Star Freddie Freeman may not be a shoe-in to re-sign with the Braves this spring. Here's some reporting from ESPN's Buster Olney:

The presumption among a lot of rival executives last year was that Freeman and the Braves would eventually work out a deal. But Freeman was not among the stars who signed a pre-lockout contract -- even after the Braves won the World Series and the franchise operated with the championship glow (and cash injection). So the industry view has shifted; there is a growing belief that Freeman will land somewhere outside of Atlanta because of the standoff in his negotiations. The Braves offered $135 million over five years, sources say, and Freeman is looking for a six-year deal.

"I think [the Braves] will move quickly to settle on an alternative and move on to get past the conversation," one official said. [ESPN]

A growing belief that Freeman will land somewhere outside of Atlanta. The usual suspects like the Dodgers and Yankees are the likely front-runners and are quite comfortable in exceeding the luxury tax threshold — unlike the Phillies.

Is it worth it for the Phillies to pony up the dough and the six years required to tantalize Freeman to relocate within his division?

With the DH coming to the NL, pretty much every team theoretically has a fit for Freeman, who has played first base in all but 19 of his 1,555 career MLB games. The Phillies have a pair of decent hitters in Rhys Hoskins and Alec Bohm, each of whom can play first. But Bohm can play third base, Hoskins can play a corner outfield role and, of course, the trio can cycle between the DH throughout the regular season.

It's pretty likely manager Joe Girardi will want Freeman's glove at first, given that he's got a Gold Glove to his name and a career .995 fielding percentage.

Freeman also hits from the left side, which is a look the Phillies' lineups have largely lacked outside of Bryce Harper and Didi Gregorius, who could be on his way out if the team can find a trade partner. In 104 career games at Citizens Bank Park, Freeman has 15 homers, 60 RBI and a .287 batting average.

Freeman is 32 years old and looking for a six-year deal. With Harper already under contract well into his late 30s, and J.T. Realmuto signed through his age 34 season, adding a veteran like Freeman with such a long commitment could really wind up putting the Phillies in a rough spot later this decade.

Money could also be tight, depending on what the luxury tax number winds up being with a new CBA. While ownership has always claimed they are open to paying the tax to win — particularly if they thought they were one player away — Freeman's offense and defense doesn't help their lack of pitching depth. The Phillies would be hamstrung to address other issues financially if they signed Freeman.

Using the 2021 numbers as a jumping off point, the Phillies will likely have around $35 million in wiggle room. Freeman turned down $27 million over six years from Atlanta and would probably be able to get more than that from another big market club. So the Phillies would have to really be comfortable spending stupid money this time.

How much better is Freeman than the other options available for the Phillies to add to their batting order?

Above are the six-best big name hitters available in free agency right now. Freeman has the best track record and had the second-best season in 2021, but is also the oldest guy out there. Correa is the prize of free agency, and at age 27, a commitment to him would be less debilitating into the future. But he will also command an enormous contract, likely one exceeding what Harper signed a few years ago.

The fit that seems best for the Phillies at this point is probably Castellanos or Schwarber. They aren't MVP candidates like the other names on the list above, but they are gettable for AAV's in a reasonable range and are under the age of 30. They also play in the outfield — something Philadelphia needs badly.

All of that being said, Freeman certainly would bring clout, experience and reliability to a Phillies lineup badly in need of all of those attributes. And if there is one thing Phillies fans — and Philly fans — know, it's that somehow, someway every single name out there is at one point or another rumored to be coming to their city. Whether Freeman rumors will have time to percolate before he signs (quickly, as Olney expects) is anyone's guess. But you can be sure they're going to at least kick the tires on the idea.