What is the Phillies' perfect outcome from MLB lockout? 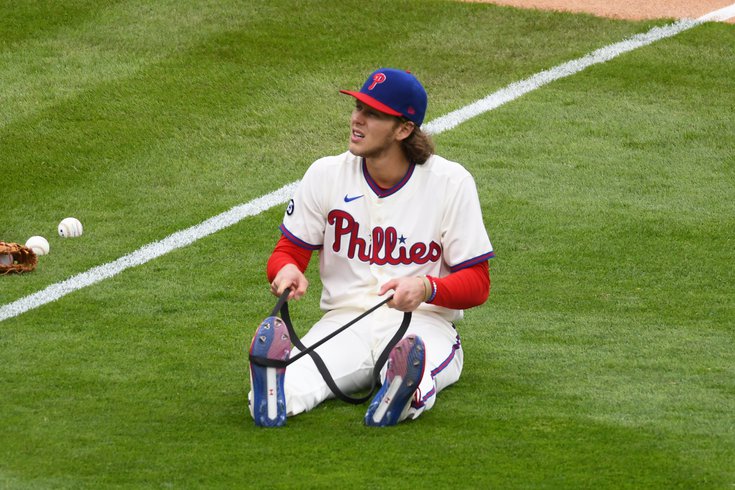 No news is bad news on the labor negotiations front, as MLB players and owners continue to make very little progress toward labor peace this offseason. And time is ticking. In three weeks, pitchers and catchers are supposed to report for spring training.

The players are expected to counter a recent proposal from ownership next week, and baseball fans everywhere hope it goes better than negations did at the end of 2021. And as we wait for some kind of deal, Phillies fans — who still have no idea who'll be playing in the outfield, manning shortstop or rounding out the pitching staff next season — might have some rooting interests in the negotiations.

Which outcomes would be the absolute best for the Phillies — a team that should be going all in to contend in 2022 with the returning NL MVP and Cy Young runner-up? Here's where an ideal outcome would fall for them in the negotiations...

The Phillies got a taste of the DH in 2020 before things went back to normal in 2021 and it seems pretty clear they are one of the NL teams who need it to return the most.

As Corey Seidman lays out in an article from last week, the Phillies are a team that will greatly benefit — not because they have a typical, every day DH waiting on their roster, but because they have a lot of moving parts and a lot of hitters that aren't particularly reliable in the field.

Given their roster construction, no team wants the designated hitter in the National League in 2022 as much as the Phillies.

The 2021 Phils had a slew of DH-types: Rhys Hoskins, Andrew McCutchen, Alec Bohm, Didi Gregorius, Brad Miller, as well as Bryce Harper and J.T. Realmuto when they dealt with injuries. From that group of seven, all but McCutchen and Miller remain on the 2022 roster.

The Phils are not set up to be a defensive-minded team. If they're finally going to snap a 10-year playoff drought, it will likely be through slugging and starting pitching. And if they can take one more poor defender off the field every day, it will make a difference.  [nbcsports.com]

Giving Joe Girardi the ability to change things up day to day and keep one of his better bats in the lineup while improving his defense on the diamond is a tool that should definitely benefit them next season.

This would probably, to some degree, help every team across the board, but a proposed 154-game schedule, eight games fewer than the conventional 162, would be a move that helped the Phillies a great deal. For what it's worth, 154 games in 2021 would have had the Phillies a game behind the Braves for the NL East title (and six games above .500). Injury issues have plagued them in recent seasons, as have depth issues. Having even a handful fewer games is in theory a recipe to keep the team just a tad healthier and to require fewer reinforcements to fill in for worn down and battered players.

While on paper it sounds like a proposal the players would reject, the MLB has offered in one of its pitches to pay the players for the full 162 games, shorten the season a bit to 154 while expanding the postseason to eight teams. This is a controversial issue for the players...

The Phillies went 82-80 last year, collapsing to go 4-6 down the stretch and finish outside of the playoff picture. With the NL's seventh best record, they would have been in the postseason had the league stuck with its 16-team bracket from the pandemic-shortened 2020 campaign. Clearly, the Phillies are not among the elite teams in the league, and would be one of the major beneficiaries of the expanded playoff proposal the owners have made. The Phillies have not been in the playoffs since 2011.

The players are opposed to this pitch, however, as they believe more teams being invited to the October tournament would create less incentive for teams to spend freely in the preseason, with the bar set considerably lower for postseason attendees. The owners would also be the main beneficiaries of increased TV revenue from broadcasting more playoff games involving more cities.

Baseball has a major tanking issue, with teams like the Orioles spending almost nothing and profiting off of revenue sharing. Last season, Philly had the fifth most expensive payroll in the league, spending $189 million. There were 12 teams that did not spend $100 million, and four teams that didn't even spend $70 million. In no other sport does one team have a payroll nearly triple another team.

Some proposals would look to create a kind of salary floor that teams would need to exceed every year. Why would Phillies fans care about this either way, as they look to contend? Well, in theory, that would create a more competitive market for free agents and make it harder for them to put together the roster they want. So while competitive balance is something the league should strives for, the Phillies in particular would benefit from the status quo here.

This one is a little tricky. On the surface, like the taking measures, the Phillies technically would benefit as an organization from being able to legally save money on prospects by calling them up a little later than conventional wisdom would suggest in order to benefit from the league's retirement of six years of service time before free agency, and three years before arbitration. They sort of did this with Spencer Howard and Alec Bohm in the 60-game season.

However, the team as a whole probably would be better served giving their current top prospective youngsters like Bryson Stott, Luis Garcia and others a fair opportunity to make the team. Stott could have a good spring and break camp as the team's starting shortstop — only if the team doesn't care about manipulating his service time and pushing back his eventual free agency. The Phillies would benefit from the elimination of this practice — as would everyone who isn't the owner if a Major League Baseball team.

In reality, any equitable labor deal would be good news for the Phillies and the fans in the city, as the team is expected to have an exciting offseason and field a roster that should provide the potential to end the playoff drought this fall. But — in a perfect world — the above is the recipe for a slightly better chance of success in 2022.