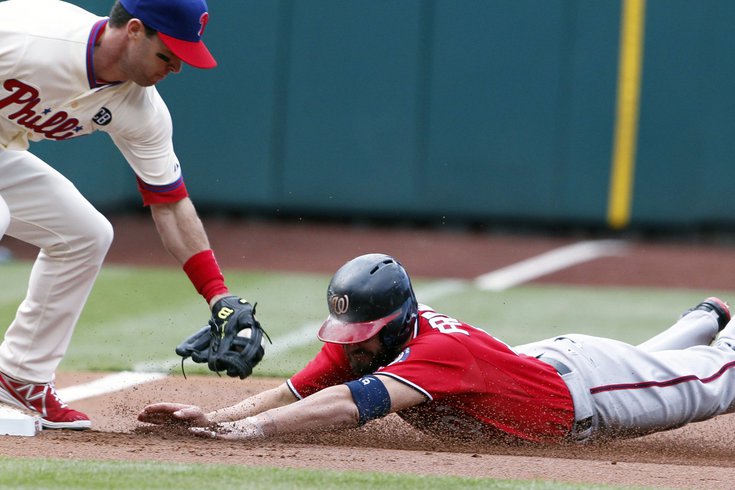 Kevin Frandsen is tagged out at third by during a 2014 Nationals-Phillies game at Citizens Bank Park in Philadelphia. Frandsen played for both teams during a nine-year MLB career before becoming a broadcaster. He spent the last four seasons in the Phillies radio booth, but will now join the Washington Nationals.

After four seasons calling games as part of the Phillies radio broadcast team, Kevin Frandsen is leaving Philadelphia to join the Washington Nationals as a color commentator.

Frandsen shared his excitement for the new role and thanked his colleagues in Philadelphia for their years working together.

"Being able to learn from and work alongside Scott Franzke, Larry Anderson, Rob Brooks and everyone in Philadelphia the last four seasons has been a blessing, but I'm so excited to work with Bob Carpenter and bring games to the incredibly knowledgeable and passionate Nationals fanbase," Frandsen said. "I cannot wait to get started."

Frandsen, a former player and San Jose native, spent parts of nine seasons in the majors and was drafted by the San Francisco Giants out of San Jose State University in 2004. He played for the Phillies during the 2012 and 2013 seasons and spent the 2014 season with the Nationals, winning an N.L. East division title.

In 2018, the Phillies brought Frandsen onto the radio team alongside long-time Scott Franzke. He split away game duties that year with Kevin Stocker and Kevin Jordan after Larry Anderson pared back his schedule to call only the team's home games. Frandsen had his role expanded the following season and had been with the team ever since.

It's not yet clear how the Phillies plan to replace Frandsen for the upcoming season's radio broadcasts, assuming the owners and players can hash out a new collective bargaining and avoid a long lockout that disrupts the 2022 baseball season.