In an instantly viral clip a from a West Virginia station, Yorgey said her 'whole life' flashed before her eyes 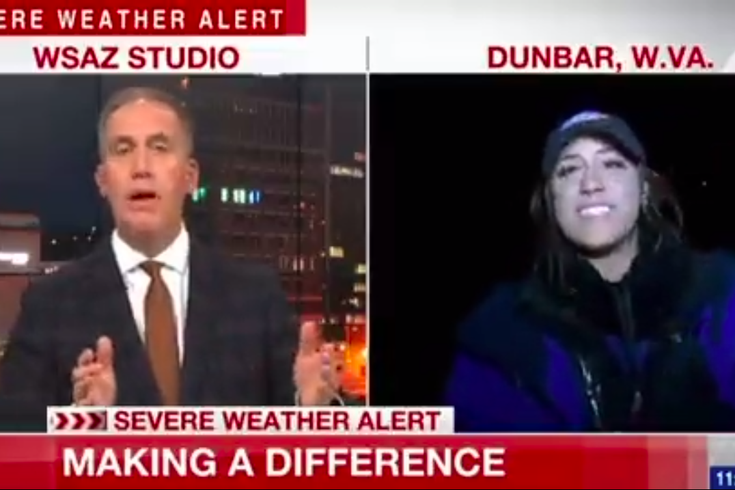 WSAZ-TV news reporter Tori Yorgey was struck by a car during a live segment Wednesday night, but was not injured. Yorgey is from Plymouth Whitemarsh, Montgomery County, and is preparing to start a new job at Pittsburgh's WTAE-TV next month.

A TV news reporter who grew up in the Philadelphia area was struck by a car Wednesday night during a live weather segment in West Virginia. Shockingly, she bounced back up moments later and declared that she was not hurt, taking the incident in stride as she carried on with her job.

Tori Yorgey, a reporter at WSAZ TV, was covering inclement weather conditions in Dunbar when a vehicle hit her from behind, knocking her to the ground. A now-viral clip of the segment shows the stunned reaction of station anchor Tim Irr, who communicated to make sure that Yorgey was OK.

“My whole life just flashed before my eyes.” A local TV reporter, Tori Yorgey in West Virginia, is hit by a car during a live shot. She gets up and continues reporting. pic.twitter.com/5IkzkIHYMf

In the background, the driver of the car that struck Yorgey can be heard asking whether she's alright.

Yorgey's bio states that she grew up in the Philadelphia area and is a diehard Philly sports fan. She graduated from Penn State University and previously interned at FOX 29, the same station where reporter Steve Keeley was memorably drilled by a curtain of snow from a plow while reporting on a 2014 storm in South Jersey.

According to More Than The Curve, Yorgey is a 2014 graduate of Plymouth Whitemarsh High School.

As she recovered from the initial shock of the accident Wednesday night, Yorgey tried to keep her composure on the air.

"My whole life just flashed before my eyes," Yorgey said. "But this is live TV and everything's OK. I thought I was in a safe spot, but clearly we might need to move the camera over a bit."

In the studio, Irr explained that there was a water main break near the location where Yorgey had been filming. Several emergency vehicles were in the area.

"A lot of times, what we have seen in those kind of situations is ... when emergency vehicles are around, there's a lot of confusion from people about drivers, about where to go, so it's possible that's what happened there," Irr said.

"That woman was so nice, though," Yorgey added. "She didn't mean to, it was an accident. I know it was."

NBC's "Today Show" ran a brief segment on the viral clip Thursday morning and confirmed that Yorgey was taken to a hospital to be evaluated. She did not appear to have any serious injuries.

Yorgey didn't respond to a request for comment Thursday morning.

Yorgey noted during the broadcast Wednesday night that this is her final week at WSAZ-TV. Beginning in February, she'll start a new job at Pittsburgh news station WTAE-TV, the city's local ABC affiliate.

In a recent interview with the Pittsburgh Post-Gazette, Yorgey said she's thrilled to be returning to Pennsylvania.

"I want to cover as much of my home state as I can," Yorgey told the Post-Gazette. "I’m just excited to be back in Pennsylvania. I love it there. I'm excited to see what the Steel City has to offer and what's ahead for me there. It will be just a great step for me career-wise and also just in life."

As Wednesday night's WSAZ-TV broadcast went viral, many praised Yorgey on social media for how she handled such a stressful and frightening situation on live TV. Others were critical of the danger TV reporters face when they are tasked with setting up their own live shots.

Tori Yorgey today is the most positive thing i have seen on television in 2022👏👏👏👏 pic.twitter.com/tUavGFEMqq

I can’t stop thinking about this. Tori Yorgey is hit by a car during her live shot, reassures everyone that she is okay, all while fixing her own camera shot 😭 the one-man-band is never appreciated enough. https://t.co/aWj5vMviVN

It appears the reporter, @toriyorgeytv, was running her own live shot, being both reporter & videographer, which is dangerous.
Nobody’s watching your back.
Good news: She got a job in Pittsburgh. I hope she doesn’t have to run her own live shots. https://t.co/PRoeOReGLF

when life hits you with a pickup truck, bounce back like Tori Yorgey @toriyorgeytv https://t.co/WMtqr9yEaG