The Democrat, who represented the Sixth District for a decade, was found guilty of federal corruption charges in November 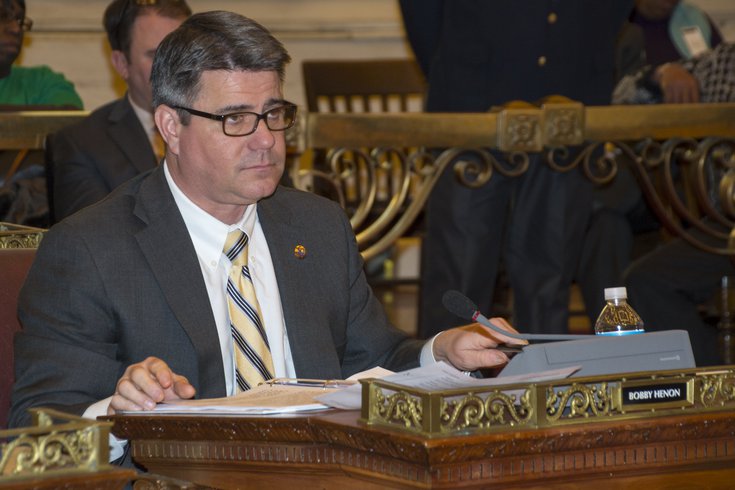 Councilmember Bobby Henon, shown above in 2016, is resigning from Philadelphia City Council two months after his conviction on federal conspiracy and fraud charges. He is set to be sentenced in February.

Bobby Henon stepped down from City Council on Thursday, two months after he was found guilty in a federal corruption trial. His resignation went into effect immediately.

Henon, 53, who represented the Sixth District in Northeast Philadelphia, previously had resigned from his committee leadership posts. State law required him to resign entirely before his sentencing hearing in February.

Henon, a Democrat, served on City Council for more than a decade, serving as majority leader during his second term. He was re-elected to a third term in 2019 despite being indicted earlier in the year.

"I am grateful to the residents of the Sixth District for allowing me to serve as councilman for the past 10 years," Henon said. "I worked hard each and every day to be an outspoken and bold advocate for the hardworking people of the Sixth district, but I could not have done it without the support and engagement of community leaders and residents.

"Although my time in Philadelphia City Council is coming to an end, my dedication to Northeast Philadelphia will never diminish. I will remain, as ever, committed to a life of service."

BREAKING: Convicted @PHLCouncil member Bobby Henon just announced he has resigned from his seat on council effective 8am today. He was first elected 10 years ago & was convicted in a federal corruption case in November and is scheduled to be sentenced February 22nd @FOX29philly pic.twitter.com/H60VEwvLSf

Henon was found guilty of accepting a union salary in excess of $70,000 and other benefits to use his position on City Council to carry out Dougherty's personal and professional agendas. Henon was a union electrician before entering politics.

Henon and Dougherty pushed back against the charges throughout the trial, arguing that their relationship and actions had not broken the law. Councilmembers are not barred from holding outside jobs.

Both men face up to 20 years in prison.

Council President Darrell Clarke will decide when to hold a special election to fill Henon's seat.

"As I've said before, I've always believed that Councilmember Henon would do what he feels is right for his constituents, for the people of Philadelphia, and for the entire city. While he must now face the consequences of his past decisions, it is important to evaluate the entirety of a person's contributions to public service throughout their whole career. He has been a consistent, strong advocate for the working families of Philadelphia throughout his 10 years of service on City Council."

In announcing his resignation, Henon also touted investments made in police buildings and parks and recreation facilities. He noted efforts to access to emergency food supplies an diapers during the COVID-19 pandemic.