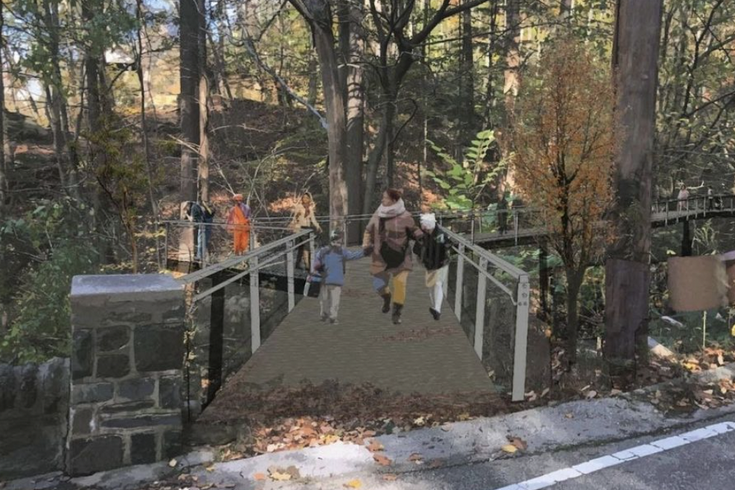 This rendering shows a proposed pedestrian bridge that would be built as part of a stream channel stabilization project on the east side of Valley Green bridge in Wissahickon Valley Park.

Storm-related erosion has taken a heavy toll on parts of Wissahickon Valley Park over the last two decades, cramping the accessibility of one of Philadelphia's most beloved trail systems.

Forbidden Drive is the park's most inviting and scenic trail, passing a series of local landmarks along a five-mile stretch of the creek running from Ten Box to Cedars House.

One valuable access point along the trail could soon be getting a new walkway as part of a larger effort to stabilize a weathered stream channel.

Friends of the Wissahickon, the nonprofit the helps care for the park, held a meeting Tuesday night to discuss annual project plans, including a new pedestrian bridge connecting the Valley Green Inn area of Forbidden Drive to the park's Orange and White Trails. The organization shared a rendering of the project, which includes a distinct viewing platform for visitors to take in their surroundings.

A post shared by Friends of the Wissahickon (@fowissahickon)

"This is the single-largest project that we have going on right now," Friends of the Wissahickon Executive Director Ruffian Tittmann said.

The nonprofit helps conserve and improve the 1,800-acre territory by protecting its landscape features and ensuring safe public access and amenities. Finding a long-term solution for this part of the park has been a priority for years.

"We've been thinking and working in this area for a really long time, and making significant investments," Tittmann said. "The stormwater runoff is the big factor that we're seeing — everywhere in the Wissihickon. It's not just a Wissahickon problem. It's a problem in lots of communities."

As a temporary fix, a small boardwalk-type bridge was installed to cover a gap that had been created from the collapsed bank. The structure lasted about a decade until further storm erosion made it unsafe and it was closed around 2014.

Philadelphia Parks & Recreation put in a staircase to allow people to use a portion of the path from the upper parking lot, but Friends of the Wissahickon has sought to restore this crossing. Doing so means completing similar stream stabilization on the lower part of the Valley Green Run after addressing erosion of the upper run in years past.

"This whole area, the whole stream channel of Valley Green Run, has experienced a lot of erosion through the years," Tittmann said. "If you're restoring the walkway, it has to go hand-in-hand with restoration of the stream channel. You're not going to go back in and immediately start disturbing the landscape."

The project is under contract and has key support at the state and local levels, but Tittmann said there remain complex permitting requirements to be addressed before it can proceed. She hopes construction can begin in late 2022 to fit within the construction windows that limit creek projects. The Wissahickon's status as a trout-stocked waterway means projects like this one can't be completed between the end of February to early June.

Between the stream stabilization and the bridge, Tittmann estimates the project will cost more than $1 million. There will be a fundraising campaign and recognition opportunities surrounding the project as the timeline progresses, and Friends of the Wissahickon anticipates holding another public meeting specifically to address this project and its alignment.

Though Tittmann said this part of the park is not generally identified as "the Wissahickon experience," she views it as an essential public access point.

"This is what I always imagine as the front door to the park. The park has so many entrances, but Valley Green Road and Wise's Mill Road are really those two main ways people access the park," Tittmann said. "It's where we have our largest parking areas that can accommodate the most folks, and where we see high traffic. We want to make this a gateway entrance and have this walkway be a signature feature that people are able to enjoy in the Wissahickon."