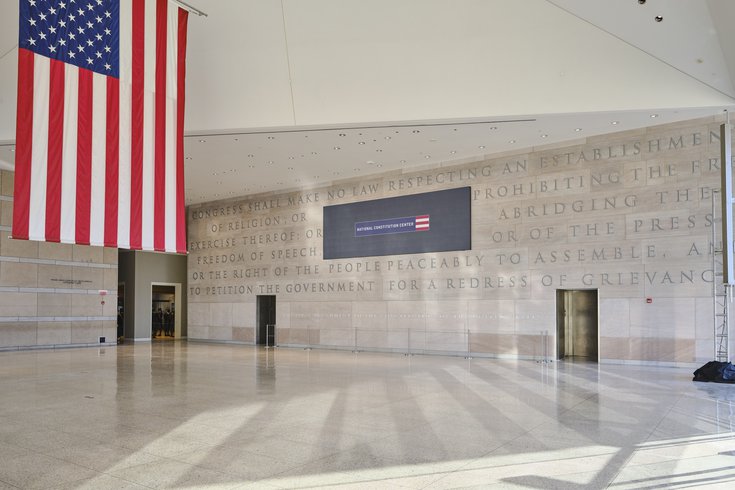 The 50-ton First Amendment tablet can be found along a 100-foot-wide wall in the National Constitution Center's Grand Hall Overlook.

A massive, marble tablet engraved with the 45 words of the First Amendment is now situated just steps away from where the U.S. Constitution was written and signed almost 235 years ago.

The 50-ton tablet is on display to the public at the National Constitution Center's Grand Hall Overlook, after a year-long installation process was recently completed. The stone engraving can be found along a 100-foot-wide wall in the museum's second-floor atrium that overlooks Independence Mall.

Made from Tennessee pink marble, the giant tablet was previously engraved, fabricated and erected in 2007 at the Newseum in Washington, D.C. The tablet was situated on the museum's four-story-high, 74-foot-tall façade that ran along Pennsylvania Avenue, just blocks away from Capitol Hill and the White House.

After the Newseum closed in 2019 due to financial issues, the Freedom Forum donated the tablet to the National Constitution Center. Work to remove the tablet from its original location and reconfigure it for its new home took place over the past year.

NOW ON DISPLAY: 50-ton marble tablet, engraved with the 45 words of the First Amendment to the U.S. Constitution, on @ConstitutionCtr’s Grand Hall Overlook.

The iconic #1stAmendment tablet was previously displayed on the four-story-high, 74-foot-tall façade of the Newseum. pic.twitter.com/LzMFJ6Zane

“As the Freedom Forum works to foster First Amendment freedoms for all, we couldn’t imagine a better home for our tablet than the National Constitution Center, where so many Americans gather each year to celebrate the values that define our country," Freedom Forum Chair and CEO Jan Neuharth said.

The text of the First Amendment reads as follows:

Congress shall make no law respecting an establishment of religion, or prohibiting the free exercise thereof; or abridging the freedom of speech, or of the press; or the right of the people peaceably to assemble, and to petition the Government for a redress of grievances.

The National Constitution Center is celebrating the addition of the 50-ton marble tablet by hosting a number of special in-person and online programs, classes and virtual tours through March.

The events, which will coincide with both Black History Month in February and Women's History Month in March, will focus on how abolitionists, suffragettes and civil rights leaders used the First Amendment to expand rights for all.

Discounted admission for adults and children is available at the museum through March. Adult tickets will only cost $10, while children ages 6-18 can enter for as little as $7.50. Tickets must be purchased online before coming to the museum.

Entry to the National Constitution Center will be free for all guests on Feb. 21 for Presidents Day. Museum members, active military personnel and children ages 5 and under already can enter at no charge.

A formal ceremony unveiling the tablet at its new home, alongside a First Amendment symposium, will take place later this spring. The symposium will kickstart a three-year initiative to develop new programs exploring First Amendment principles and issues, culminating with the opening of a permanent First Amendment gallery at the museum.

The National Constitution Center is open Wednesday-Sunday from 10 a.m.-5 p.m. All guests must wear face masks.