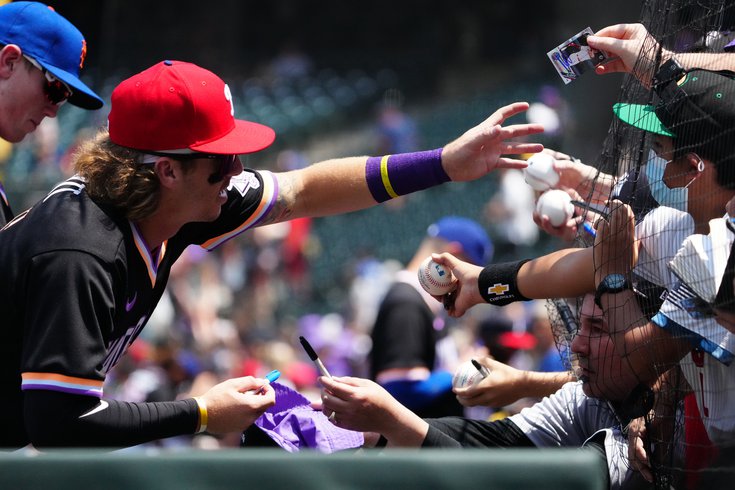 Bryson Stott was in the MLB Futures Game this past July. Is he a star infielder of the future for the franchise?

Baseball is taking a break right now. There's not much to write or talk about.

During what should be a period of hope for Phillies fans and high activity for the team's front office, the players and owners are mired in a work stoppage that reportedly is showing no signs of being close to any kind of agreement to get the 2022 offseason going.

If you go to the Phillies website right now, you'll see generic shadows where headshots of players used to be. Everywhere, that is, except for listings of the team's young prospects. Not yet members of the MLBPA, the Phillies top recent draft picks haven't made it to the big leagues yet and therefore aren't a part of the lockout.

That's where we'll be spending our time today, taking a look at when and how the top players in the farm system will make their MLB impact. We'll include the top 10 prospects and some others of note, via MLB.com's rankings:

The lanky 6-foot-5 former first-round pick is currently ranked as the team's top prospect, despite having some trouble adjusting to pro baseball with a 1-3 record in 14 games started in 2021 for the Clearwater Threshers. He had a 4.43 ERA and barely got through more than three innings per game. However his stuff is still impressive and scouts are still extremely high on him, expecting more in 2022. Perhaps he makes it to Double-A this season and can get into the conversation as a potential top starter in two or three years.

You might be thinking, Stott is 24, it's about damn time he makes it to the majors. And you are somewhat correct. However a completely idle 2020 season — with no minor leagues due to COVID — certainly did the former first rounder no favors. A fantastic 2021 season did, however, as he hit .299 across three minor league levels over 114 games. He also tallied 44 extra base hits (16 of them homers). Stott should be a key player to watch in spring training and depending on what the front office decides to do with the infield, he could break camp on the 26-man roster.

Another huge arm — he is 6-foot-7 — Painter is the second half of the one-two punch atop the rotation the organization is hoping for alongside Abel. Painter was the 13th overall pick last summer, and he had four scoreless starts in rookie ball to kick off his pro career. It'll be interesting to see how long the teenager needs to adjust in the high minors after being drafted out of high school. A realistically optimistic assessment would have him in red pinstripes after three years in the minors.

The Phillies acquired Crouse along with Kyle Gibson at the trade deadline and he made two appearances (not great ones) in the majors last season. He is expected to compete for the fifth starter's spot in spring training, and even if he doesn't win the role he'll likely be in conversation to be the sixth man in the rotation, called up (with a good Triple-A showing) should Philly need an injury replacement. They certainly hope he takes the job and stays in the majors.

Yes, four of the top five prospects in the team's organization are starting pitchers, which shows you how highly the team prioritizes the position. Morales was an international signee who hasn't played great in recent seasons — he was 4-14 with a 6.28 ERA in 2021. But his fastball can really move, and sits at 98. He has stuff, but needs control. He probably requires another year to find his command in the minors.

Rojas is a Dominican born speedy outfielder who has the ability to handle the bat — think a Roman Quinn with a higher ceiling for consistency. He is a career .280 hitter across four levels of the low minors. If he makes it to Triple-A this season you'll know he's on track to make an impact in 2023.

Wilson was last year's second round pick and he is an outfielder who flashed a lot of power in college, demolishing the South Alabama freshman homer record. He had a rough go of it in 30 games with Clearwater last season, hitting just .215. Hopefully he won't be as raw this year and will make it through the low minors quickly.

Garcia is a really good defensive player but the reason he hasn't jumped past Single-A ball is his offense. He's hit .238 over 237 career professional games but he has shown he can hit in spurts, winning a batting title during his first season back in 2018. He projects anywhere from a starting infielder to a defense-first utility man.

It will be interesting to see how prospect rankings treat Miller as the 2022 season approaches. Injuries forced the southpaw to miss all but five starts in 2021, but he absolutely dominated when he was on the mound, boasting a 1.48 ERA in those appearances. He is 23, but hasn't even sniffed Double-A yet and there could be some urgency for him to stay healthy and climb the minor league ladder. He is still a good two seasons away from being ready.

Ortiz has some serious pop — he hit 23 home runs in 95 games last year — but everything else is coming along slowly. He needs to get better with plate discipline but there is an obvious opening for an MLB outfielder this season and Ortiz could have a chance in the spring. If he doesn't snag the job, a year in Triple-A should be the last hurdle.

Other prospects to watch: