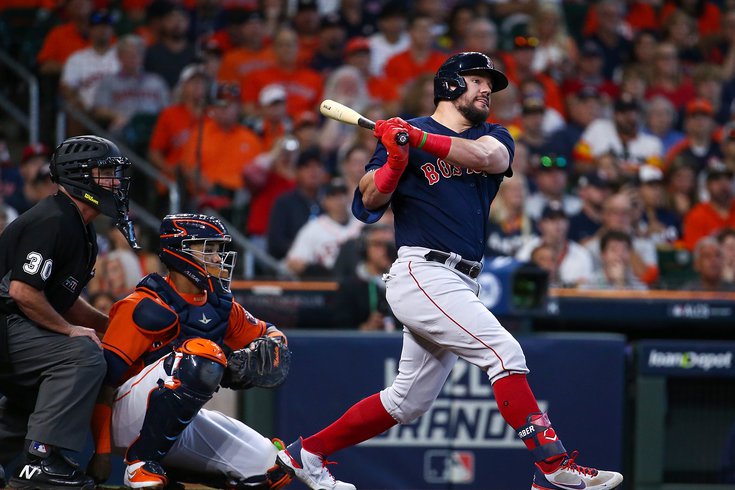 Will Kyle Schwarber be in red pinstripes next season?

As you no doubt know, Major League Baseball is in a holding pattern right now, as the owners and players wait out one another in the league's first work stoppage since 1994.

The Phillies have an incomplete roster right now, to say the least, and they'll be using a combination of trades and free agent signings to hopefully piece together their first playoff roster since 2011.

We don't have a ton of information to go off of — even the rumor mill as ceased as the lockout drags on — but that doesn't mean we can't contemplate a day when the owners and players come to an agreement and pitchers and catchers report to Clearwater.

In the spirit of optimism, we've thrown together our first 26-man roster projection for the upcoming season. This is, of course, assuming that the roster size will remain at 26 players. We are also going to assume that the DH will finally come to the National League full-time when building this roster.

So without further ado, here's out first stab at what the Phils will look like come the spring:

Yes, we are putting Hoskins at DH for now. The Phillies' roster offers a lot of flexibility, boasting a number of guys who can play more than one position. Hoskins is of course a first baseman by trade who can play the corner outfield. He isn't particularly great at either one. He slots in as our designated hitter.

No surprise here, as the Phillies will bring back their All-Star catcher on the first year of his monster four-year deal.

Bohm was inconsistent at third base last season but did show a little improvement. With so many talented shortstops and third baseman out there in free agency, we're going to have Bohm move over to a position he will do less damage at in the field as the Phillies improve the infield as a whole.

He is 32 and still can do all the things he did in his prime, though perhaps a little less so across the board. He is adequate in the field and can hit for average. It's worth noting that as his deal includes a club option in 2023, he is an expiring contract that the Phillies could dangle in front of a trade suitor in order to bring in a veteran at another position. He likely won't be back in 2023 regardless of the option.

Hear us out. Gregorius' contract isn't particularly tradable (he is slated to make more than $15 million, though it does expire) and the Phillies might find themselves stuck with him. However, this projection is for who starts the year for the Phillies, not who finishes it. With a good spring training, former first-round pick Bryson Stott could find himself playing everyday in South Philly sometime next spring, and we predict he'll take over Gregorius' job before June.

Bryant's agent is Scott Boras, who has done a few big deals with the Phillies in recent years. One of his best friends in the league is Bryce Harper, who as everyone knows is not shy to recruit for his adopted home of Philadelphia. Bryant taking over at third would give the Phillies a third big, middle-of-the-order bat to group with Harper and Hoskins. He is an upgrade on defense, and could play in the outfield when needed as well as get some starts at DH.

Bryant could also simply be a placeholder in our projections.

The Phillies have a chance at signing a number of talented infielders, like a shortstop in Carlos Correa or Kyle Seager or Trevor Story, or even a first baseman like Freddie Freeman. Obviously a signing like that would create a necessary shift across the rest of the infield. With the DH likely on the horizon, the Phillies have to add someone to the mix and Bryant, a former MVP who is still just 29, fits the bill perfectly.

We'll get the easy part of the outfield out of the way first. Harper won the 2021 MVP award and single-handedly kept the Phillies in playoff contention. Here's hoping he has some help next September.

The Phillies will be working the trade market hard, and the guess is they'll do at least something via swap this offseason. Kiermaier has already been connected to the Phillies this offseason, and he's got a great glove and a decent bat. However, he's had injury issues. He may find the Rays motivated in moving him as they have a stud prospect waiting in the wings behind him and the Phillies in desperate need of a serviceable outfielder.

Can the Phillies afford both Bryant and Schwarber? The argument here is, how can they not? Putting together a team that has as much power as the one we project here would finally make Citizens Bank Park a real home field advantage and Schwarber could also play a bunch of DH. There hasn't been a free agent pool this deep in a long time and Philadelphia has to cash in.

We'll use this spot to try and justify the spending spree we are proposing. Assuming the luxury tax remains close to the same (which is a big assumption), the Phillies currently, before any of our fake signings have $174 million in payroll obligations (according to Spotrac.com), giving them around $35 million to play with. Let's give Bryant $22 million a year, and Schwarber $13 million a year. That puts them right on the number.

It's clear, as we continue, that the Phillies are going to need to pony up a little bit more cash to bring in some relief pitchers and starting depth, which could put them over the $210 million mark. Finding a trade partner to take Gregorius or Segura would solve that issue — or structuring the contracts to take advantage of their $30 million plus likely to come off the payroll in 2023, but there is some urgency for the Phillies to compete now. We're going to give them credit for finally exceeding the threshold, by a few million, to field a contender this season.

• Wheeler is the Cy Young runner up.

• Nola will be here for at least one more year as the Phils hope for a bounce back from one of their only homegrown players.

• Gibson is a middle-of-the-rotation guy they traded for last summer. Suarez had a spectacular end to the 2021 season and should have a rotation spot locked up.

• With Zach Eflin under team control for one more year and working back from an injury, he may or may not be the fifth guy.

• The guess here is the Phils add some depth and a guy like Matt Boyd — 30 years old and fresh off a 3.89 ERA season with the Tigers (in 15 starts) — is the kind of pitcher Dave Dombrowski may target somewhere in the $10 million neighborhood.

• Hans Crouse is an in-house name to watch out for for the fifth spot too.

The Phillies already made some news in the bullpen, signing Corey Knebel right before the lockout started. They also failed to bring back Hector Neris, who is now an Astro. There isn't a whole lot of the bullpen left on the roster...

• Dominguez, if healthy, will be back for another year.

• The other four are up for grabs. We are expecting at least two more bullpen signings — we'll project they bring back Archie Bradley (for less money) and former Dodger and Red Sox hurler Kelly on the open market.

• Final spots will likely go to one of their middle-of-the-road prospects like Bradley Falter, who projects as a decent longman after some impressive minor league dealing in recent seasons, and JoJo Romero, who is a lefty with some potential.

• The team will surely invite some veterans on minor-league deals who could vie for jobs in the 'pen too.

Isn't this an exciting group?

• Kingery was a total bust but remains in the farm system and the thinking here is he'll fight for a utility role on the big-league roster. (He is making $6 million either way, so why not give him a chance?)

• With Andrew Knapp gone, Marchan will finally get to be Realmuto's backup. Maton had an up-and-down year, but someone in that mold will likely break camp with the Phillies, giving them flexibility at all positions.

• Veirling, who is currently the only other outfielder on the MLB roster alongside Harper, projects as their fourth OF — though Mickey Moniak and Adam Haseley could have something to say about that if either has an impressive spring training.