Phillies roster construction continues to give cause for concern

Philadelphia relies an outrageous amount on free agents and trades... 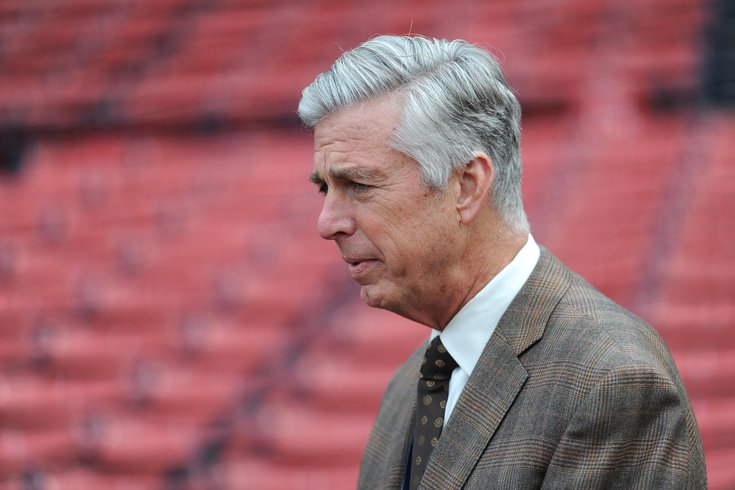 The Phillies have not made the playoffs in 10 years, a decade which has consisted of several different eras of futility.

First, the team hung onto its aging stars from the 2008 World Series team too long and fell into mediocrity. Then, the team welcomed the Matt Klentak era, which saw failed draft picks and signings and no sparks to help jumpstart a rebuild. And finally, Dave Dombrowski was brought in to call the shots. He currently has the reigning MVP, Cy Young runner-up and an inflated payroll that should be able to compete but so far has not following a disappointing 82-80 season in 2021.

Phillies fans are mired in a rare dead period in the sport. A time that is usually full of transactions, signings and trades — as well as a countdown to pitchers and catchers reporting in February — is instead completely idle.

The Phillies, like the league's other 29 teams, have a set 40-man roster and a bevy of needs to address before spring training and eventually naming a 26-man Opening Day roster. Due to the current labor strife, players who are on a 40-man roster are barred from team training facilities. Which is bad news for young players who need the extra work, like Alec Bohm. Other prospects who are not on the roster, like Bryson Stott or Logan O'Hoppe, are able to get reps in as the spring approaches.

The players who are currently represented by grey faceless images on MLB team sites right now are hanging tight, waiting for news. If you take a look at the Phillies current 40-man roster, the construction of the team is really alarming — and has been for years.

Why? Well, if you break it down into how players were acquired and how they have performed, there is an incredible and glaring indictment on the last three regimes and how they drafted, signed international prospects and decided to spend resources.

To be clear, the 40-man roster is a living, breathing thing and it is used for a number of purposes. It helps to protect players from being poached via the Rule 5 draft, and also creates a quicker path for minor leaguers to make it to the majors. We know the 40-man roster will be changing a great deal before the start of the 2022 season. But since it is currently frozen in time, it's an interesting list to break down.

Of the current 40 players with the big league club, 19 have been acquired via trade or free agency. The other 21 are homegrown. That sounds fine, right?

The 19 mercenaries have a career combined Wins Above Replacement of 159.5, according to Baseball Reference. The homegrown players' WAR is 41.9. Players who were not drafted by the Phillies — and cost the team something extra, whether it be free agent money or prospects — account for 80% of the career production on the 40-man roster.

It's actually worse than that too, because if you eliminate Aaron Nola's 24.2 WAR, you are left with a WAR of 17.7.

It makes perfect sense when you think about it. Since taking Nola and Rhys Hoskins in the 2014 draft, the Phillies have made 244 selections in total. Of those 244, 17 — yes, just 17 — have made it to the majors. Their combined WAR is 3. Over that span, the Phillies picked inside the top 10 four times, including having the top pick in every round in the 2016 draft.

They have not found a single reliable contributor — though obviously it is too early to make an assessment of Bohm, Stott or any other of the more recent draft picks.

Even through the international signing process, the Phillies haven't added a ton of talent. Only Ranger Suarez and his 6.1 WAR stand out as foreign amateur signings that have paid off on the current 40-man roster.

Of all people, the NL MVP Bryce Harper spoke out at the end of the 2021 season for the Phils' need to find a way to create their own contributors.

Last season, just two homegrown position players — Hoskins and Odubel Herrera — played in more than 100 games. Just three of the Phillies' top 10 pitchers by 2021 were developed in the team's own farm system — Nola, Suarez and Hector Neris, who has since signed with HoustonI

"Of course, you go into every offseason wanting an opportunity to get a top guy," Harper said. "But we can't just keep going out and buying and buying and buying. We need homegrown talent. When you look at teams that have homegrown talent, those are the teams that have success. I think, as a whole, we need our minor leagues to be better. We need guys to come up from the minor leagues and have success and be successful. Not have to go up and down."

The Phillies have two players in Baseball America's top 100 prospects in 2021 draftee Mick Abel and the aforementioned Stott. But neither are in the top 50.

Harper hit the nail on the head, noting that the Phillies need to get more from the hundreds of players they employ to play baseball, and those who evaluate, coach and train them. It's possible that by the time the final 40-man roster is set, the Phillies will have more than 19 non-homegrown players on it. They need starting pitching, a shortstop, outfielders, bullpen help, starting depth and a bench. And unfortunately, there aren't very many organizational farmhands ready to make the jump and help this team, particularly if it hopes to contend.

It's been a complete failure, from scouting to drafting to developing and everything in between. Sure, Kris Bryant would be great — but he won't solve the problem. He'd just be another multi-million dollar bandaid.