How Chase Utley inspired local cancer survivor (and Dodgers prospect) Devin Smeltzer, both on and off the field

'My story isn’t about me anymore. My story is about giving hope to other people' 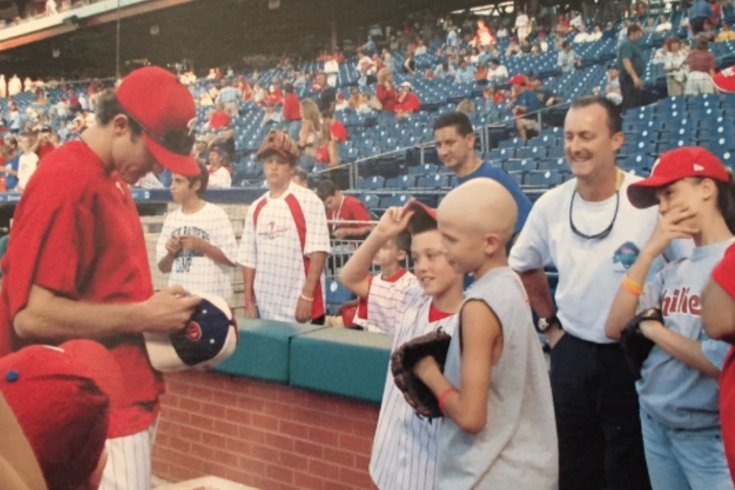 Chase Utley signs an autograph for a 10-year-old cancer patient Devin Smeltzer in 2006. Last week, the two were reunited as Smeltzer, now 22, plays for the Dodgers' double-A affiliate.

It would be easy to leave behind the frail, 10-year-old bald kid pumping his left fist into a baseball glove, the one there waiting for his childhood hero Chase Utley to present him with a lifelong memento. That’s not the way Devin Smeltzer rolls.

Smeltzer, now 22, will never forget that 10-year-old with cancer, because he was that kid.

As a left-handed pitcher for the Los Angeles Dodgers’ double-A affiliate Tulsa Drillers, Smeltzer finds himself on a new plateau, known by hundreds of thousands across the country since the Dodgers and SportsNet LA released a video with him and Utley that went viral a few weeks ago.

Though many didn't previously know Smeltzer's story, it's one they won't likely forget. Just like the 6-foot-3, 195-pound minor-leaguer hasn't forgotten about the 10-year-old boy with the cancer-ravaged body waiting to meet his hero. Or the names he continues to carry along with him.

From his days as a star pitcher at Bishop Eustace High School in South Jersey, the Voorhees native has scrawled a group of special names under the bill of his cap, those who didn't get to leave St. Christopher's Hospital like he did.

Like Frankie, who never reached 9, and Little Lea, who didn’t make it to the age of 2. Mr. Love, the father of a friend, is on there, too. Smeltzer feels compelled to live for them.

Smeltzer also needed to thank Utley in person, but the two hadn’t met since that memorable day at Citizens Bank Park.

Tim and Chrissy Smeltzer, Devin’s parents, urged their son to reach out to Utley while they were both at the Dodgers’ Camelback Ranch facility, in Glendale, Arizona. So Devin got in touch with the Dodgers’ director of player development, Brandon Gomes.

“I told Brandon that I didn’t want a big deal made out of this, because Chase had done a lot for me and St. Christopher’s when I was there,” recalled Devin, who was nine when he was diagnosed with cancer. Doctors had found a mass the size of a grapefruit pressing against his bladder and connected to his prostate.

“Brandon was all over it, and said we would go over to the Dodgers’ facility to talk to Chase and the Dodgers ... I got there the next day and a camera crew was there to mic me up. I was like, ‘What’s going on, man?’ They were like, ‘We’re just going to go over there and talk to [Utley].’ We wound up going over and I got a chance to speak with ‘Doc’ [Dodgers’ manager Dave Roberts], who introduced me to the whole clubhouse. I told my story, and it was pretty cool.

"That’s what’s it’s all about, getting my story out there on a higher platform so people know you can survive childhood cancer and try to inspire as many people as possible.”

Utley knew Smeltzer was coming at some point. Agents for Smeltzer and Utley spoke about it, and the Dodgers had talked to the former Phillies star, now 39, gray and in his 17th season in the majors. Still, in watching the viral video, Utley was taken slightly aback, as you see him shifting in his seat. As Phillies’ fans are well aware, the legendary Phil is not the most emotionally demonstrative guy.

But this got him.

Hear about the incredible story of #Dodgers minor leaguer @alka_SMELTZer who survived cancer at the age of 9 and his special connection with a current Dodger.

This story & more on an all-new #BackstageDodgers tonight after the post-game show. pic.twitter.com/76ZKaB5xtp

Utley appeared lost for a minute, looking at the picture of Smeltzer as a kid, then back to the young man beside him – almost in disbelief of his journey from cancer to the Dodgers.

“Chase is very, very humble and he’s definitely the most down-to-earth guy over in that clubhouse for sure,” Smeltzer said. “I personally think Chase is extremely misunderstood, because if you’re not a Dodger or Phillies’ fan, most people do not like Utley. He’s an old-school player who plays hard, and some of his slides people may question, but as a baseball player, I’m old school as well.

"He is a guy you love to have on your team ... I haven’t had a chance to play with him, but growing up watching him play through all of the years, I wouldn’t want anyone else out there besides him.”

They spoke for a little while, and after it was done, Utley actually chased down Smeltzer to get a photo with him. 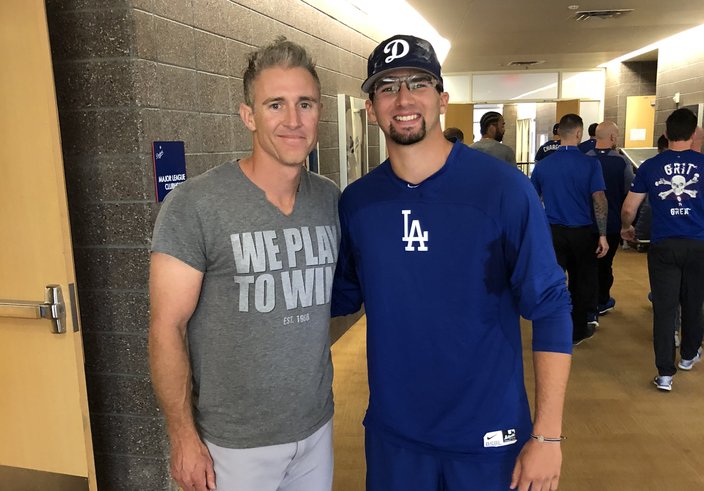 Chase Utley and Devin Smeltzer reunite for the first time in years during Dodgers spring training.

"Everyone has a purpose in life. This is who I’m meant to be. It’s what I do, and I have been blessed with this great platform of baseball. I mean, if I’m not helping and talking to kids, what’s the point?"

Smeltzer, who is engaged and set to be married in November to his Eustace Prep sweetheart, Brianne Innamorato, will adopt a Tulsa hospital to visit regularly. Just like he did last season when he was with the Rancho Cucamonga Quakes, where he befriended a young boy with leukemia in remission. And just like he did when he was at Eustace as a teenager.

He’s not completely free from the ordeal he experienced as a child, however.

The remnants of long-term radiation on his bladder led to side effects last season, when he began experiencing internal irritation. Aggravated scar tissue was detected during exploratory surgery in October 2017 and surgery was performed in mid-December to clean it up.

All the while, Smeltzer pitched through the discomfort.

“It’s over now,” he says. “Everyone has a purpose in life. This is who I’m meant to be. It’s what I do, and I have been blessed with this great platform of baseball. I mean if I’m not helping and talking to kids, what’s the point?”

In March, Smeltzer started the #CatchCancerLooking Strikeout Campaign, in which donors can pledge on a per-strikeout basis in addition to making a one-time donation. The proceeds go to Katie’s Crusaders at St. Christopher's Hospital. 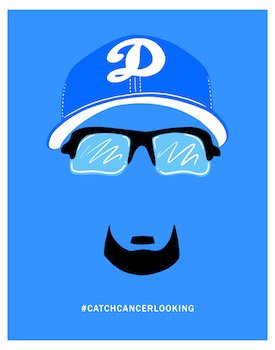 The foundation may receive a great head start – the video with Devin and Utley drew over a million views.

The reaction overwhelmed Smeltzer, whose voice mailbox filled up. He was deluged with thousands of encouraging tweets, including one from Shane Victorino, and interview requests from a pile of media outlets. Smeltzer’s next goal is to reach out to Cole Hamels, who also visited St. Christopher’s.

As for his playing career, Devin is not setting any timetable on when he plans on reaching the majors. That, he says, will take care of itself.

In the meantime, the Dodgers — and skipper Roberts, a cancer survivor himself — have been “unbelievable” to him. Smeltzer says the organization takes genuine pride in treating its players like one big family. The Dodgers were also well aware of his medical history. He likes to joke that it’s the first time Major League Baseball ever received an encyclopedic-sized medical report on anyone.

Smeltzer, who gave up seven hits and three runs over four innings in his first start (a 12-7 Texas League win on April 8), is just beginning to catch up with everything.

“My story isn’t about me anymore,” he said. “My story is about giving hope to other people. There was a kid almost the same age as me. He didn’t make it. The hardest thing about going through cancer is meeting all these amazing people, and those people passing away and you moving on. I remember Frankie. There was Baby Lea, and it was hard to hear when she passed away. She was under 2. That’s the hard part. I beat cancer, but the battle is still there. I’ll always have it.

“Like I said in the video, every time I come home, the pictures of me and Utley, and me and Cole Hamels have been hanging in the family living room forever. It’s always very humbling to see how far I’ve come and where I was at one point.

“I believe that 10-year-old in the picture is completely who I am. The fire has always been under my ass. I was always an ornery, fiery little guy and anyone who ever saw me play in high school knows that’s how I play. Ask anyone in this organization. I’ve had people tell me, 'Don’t let anyone ever take your fire away, kid.' When that happens, your career is over. That’s who I am and I’ve learned to channel it; to make sure it’s not directed at anyone. If things go wrong on the mound, it’s usually my fault. I didn’t make a good enough pitch. I’ve grown in a lot of ways, but I would say the 10-year-old in the picture is still exactly who I am.

“The names are still under the bill of my cap. That hasn’t changed. They’re still there.”

They’re a little less legible these days – through time and sweat, they’re bound to smudge like they always do – but it doesn't matter to Smeltzer. Because, to him, they’re indelible.