How many compensatory picks should the Eagles expect to gain in 2019?

Today – Wednesday, May 9, to be more specific – is a minor landmark day in the NFL this offseason. It's the first day that teams can sign unrestricted free agents and not have them count toward the compensatory pick formula.

The folks at OverTheCap.com do a great job of predicting the comp picks that will be awarded to each team, which is determined through a cancellation process of players lost vs. players gained. Here's what they originally had for the Eagles a week ago: 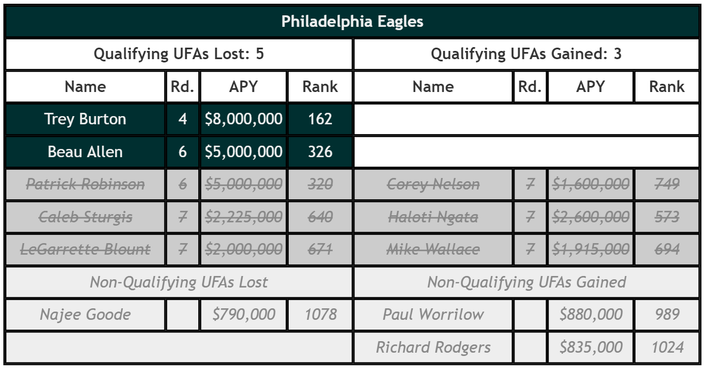 What does the chart above mean, exactly? The short answer is that the Eagles are in line for an extra fourth-round pick and an extra sixth-round pick for the losses of Trey Burton and Beau Allen (or Patrick Robinson), respectively.

However, it appears that Howie Roseman and the gang may have found a loophole in the system, potentially adding an extra sixth-round pick, per OverTheCap. Mike Wallace, who originally counted toward the formula in the cancellation chart above, may not count at all, after closer inspection on the crafty way Roseman and Jake Rosenberg structured his deal.

The other unusual case involves Mike Wallace, going from Baltimore to Philadelphia. As I mentioned above, the Eagles are a team that have been largely ignored in recent comp pick studies, but historically this is mistaken to do so. From 2004 to 2011, the Eagles got multiple comp picks in six of those eight drafts, and were second only to Baltimore in the most total comp picks awarded. Howie Roseman was a high level executive with the team during those times, and looking at how he’s crafted some of his CFA signings, there are signs that he just as determined as Ozzie Newsome, Bill Belichick, or John Elway in manipulating the comp pick system.

This brings us back to Wallace. Early reports had his Eagles’ deal as one year and “up to” $4 million. However, it was soon discovered that there was plenty of funny money in that deal. $2.o85 million of that $4 million are in Likely To Be Earned incentives, and among the most laughable was a $585,000 weight bonus to be earned by reporting to offseason workouts under 250 pounds. It’s laughable because Wallace, a wide receiver, has consistently played at a relatively svelte 200 pounds. But the comp pick formula shines insight on this unusual bonus, as it’s established that weight bonuses do not count. (See Terrance Knighton demoting a comp pick for Denver in 2016.)

But it doesn’t end there. Wallace’s $1 million signing bonus is actually an OATSB–Other Amount Treated As Signing Bonus. OTC also believes that this OATSB is a guaranteed workout bonus. Although it’s unclear how the comp pick formula will judge such a payment, it has been very consistent in not counting workout bonuses of any kind. Because there are many signs suggesting that the Eagles are manipulating the formula with Wallace’s contract, I’m therefore guessing that this $1 million will not count either. If that guess is correct, all that’s left to count is Wallace’s veteran minimum base salary of $915,000, and while he could still qualify if he plays enough snaps, currently that’s not enough to break the current qualification limit of $1 million.

The end result? If Wallace does not qualify, as I have it so right now, it opens up an additional 6th rounder to Philadelphia for Patrick Robinson, and it potentially costs Baltimore a 7th for Wallace.

If accurate (we'll find out next March), the Eagles would have 11 picks in the 2019 NFL Draft, or more than double the number they made this year. They are listed here: