A new report is trying to help cities prophesize what being home to Amazon’s HQ2 could mean for its residents’ economy – namely, their rent.

A new study from Zillow published Thursday is not the first to quantify the inflation of the cost of living that could come hand-in-hand with a new Amazon location – we covered Apartment List’s study last year. Created with the updated HQ2 Top 20 finalists in mind, though, Zillow’s report pinpoints Nashville as the contender at risk of the most extreme rent hikes.

Philadelphia is at risk of among the lowest rent hikes of the final 20 contenders, though building Amazon here would still hike up rent at nearly double the rate prices are projected to go up without Amazon. 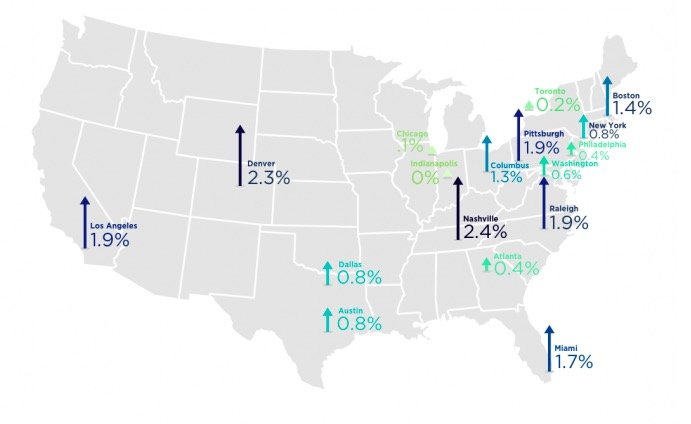 The research identifies the median rent in Philadelphia as $1,579. Without Amazon, prices are projected to increase at a rate of 0.4 percent. Throw Amazon into the mix and the projection goes up another 0.4 percentage points. That means, instead of median rent going up by $71 over a year, it could jump closer to an added $138.

Atlanta, which has been rumored as the frontrunner for the new location since the beginning, would see a moderate rent increase on par with that of Philadelphia’s.

Read more about Zillow’s methodology and check out the full study here.