How 'Philly' is that 'Homefront: The Revolution' jawn?

The new video game is set in The City of Neighborhoods: here's what it gets right and what it leaves out 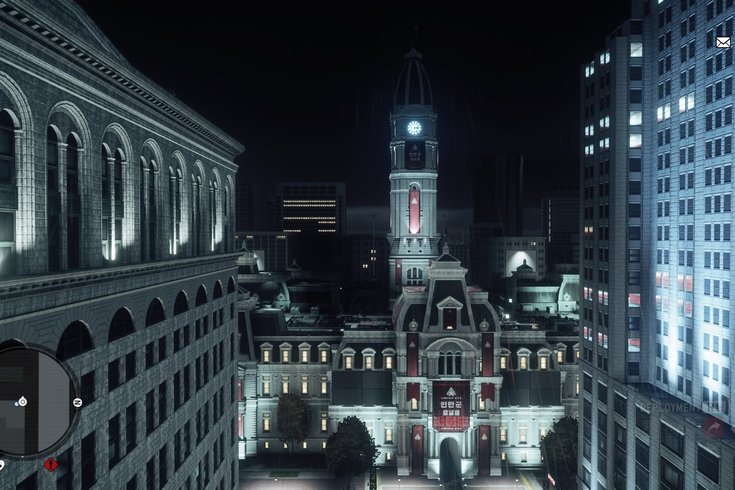 City Hall, seen late in "Homefront: The Revolution." William Penn can be seen on the top of the tower in some scenes.

For a little over a week, video gamers have been able to explore a virtual Philadelphia and attempt to free the City of Brotherly Love from the oppressive grip of an occupying Korean army.

Since its May 17 release, the game has been through the wringer.

Critics have had their way with the game, and most agree that it's buggy, generic and dull. And they are right. The game stutters and freezes at times, enemies glitch and disappear during the action and the middle of the game is a slog of similar, repetitive missions with no real guidance over where the player should go or what they're tasked to do.

But it has high points – including a great nighttime raid by zipline on City Hall – and there's definitely elements of Philadelphia permeating the entire thing.

We wanted to take a look at the game – in development for nearly five years by Deep Silver's Dambuster Studios in Nottingham, England – to see what they got right and what they left out.

Philadelphia isn't Philadelphia without its plentiful landmarks. Love Park, City Hall, Independence Hall, the Philadelphia Museum of Art, the Ben Franklin Bridge... we could go on all day.

So what's in the game?

When we talked to Fasahat Salim, project lead for the game, about a week before the game's release, he promised it would feature those landmarks, plus areas designed to evoke Philly's neighborhood aesthetic and really "get the essence of the city."

First off, know that the Philadelphia Museum of Art wasn't on the game designers' canvas. It's just not here. Another miss: a late game raid on "police headquarters" in Center City looks nothing like the Roundhouse at 8th and Race streets.

But many other elements are visible with virtual space, with varying degrees of familiarity: 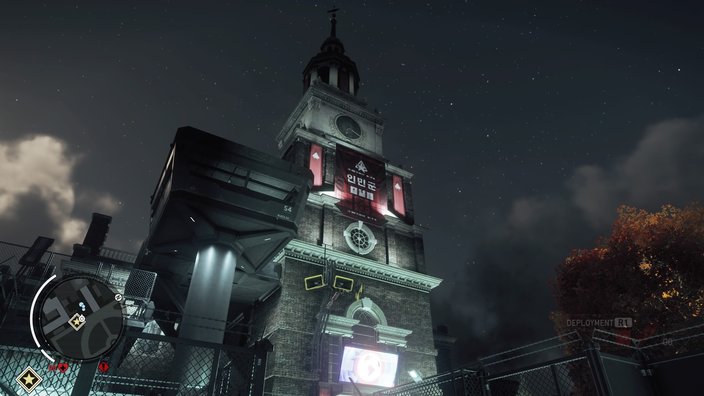 Independence Hall in Homefront: The Revolution. It's used as a prison in the game.

Independence Hall makes an early appearance as a place for you to escape from and then, later, you raid in your fight against the occupying Korean military. You don't get to explore the structure much, but it looks similar to the actual building – minus the Korean language propaganda, of course. 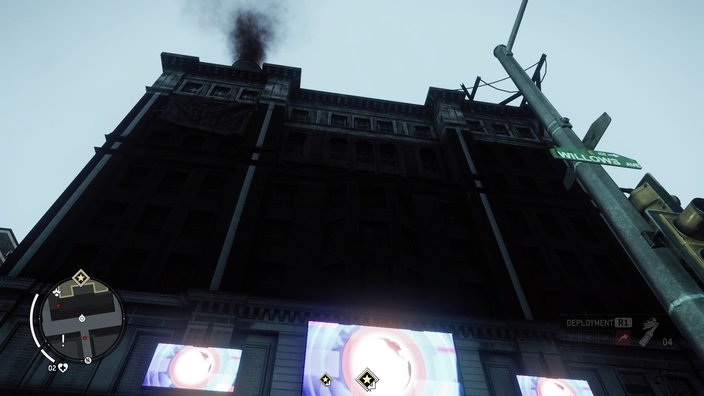 The Bourse as seen from the game's fictional "Willows Avenue."

The Bourse makes an appearance in the game. The basement of the building serves as a mission base for your crew. One complaint about the design here is that the inside of the building is laid out as a three-story prison structure with a ring for bare knuckle fighting. The player can't take part in these fights or wager on them. 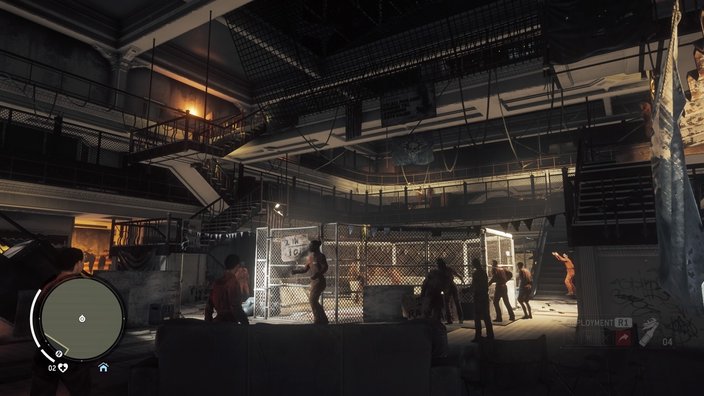 The inside of the Bourse is a prison - complete with inmate cage fighting.

Throughout the game, players are told to find hideouts by looking for graffiti depicting houses on walls. When players are sent to find a hideout at the Bourse, there are two doors on the third floor of the building with these markings.

These doors never open and don't serve as hideouts. Instead, players should look for a door on the first floor with identical markings. So, really, players have no need to explore the entire structure at all. It almost seems meaninglessly designed too large. 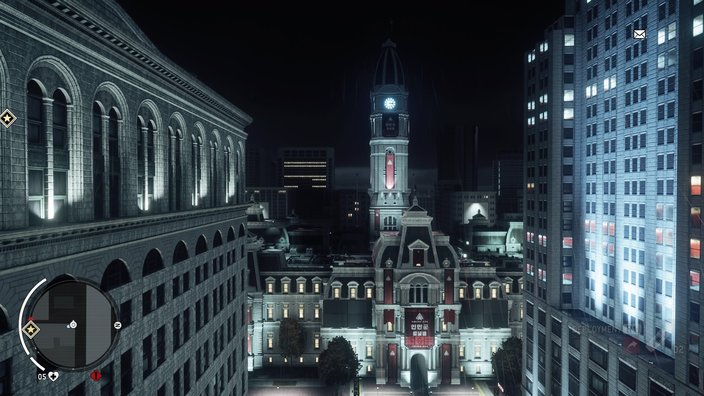 City Hall, seen late in Homefront: The Revolution. William Penn can now be seen on the top of the tower.

OK, spoiler alert! The final levels of the game take players through – in what is really the most fun and exciting part of the game – a raid to take down the corrupt mayor in City Hall. Outside, the building looks great but William Penn is missing from the tower in an early level of the game, but he magically appears in the final levels. 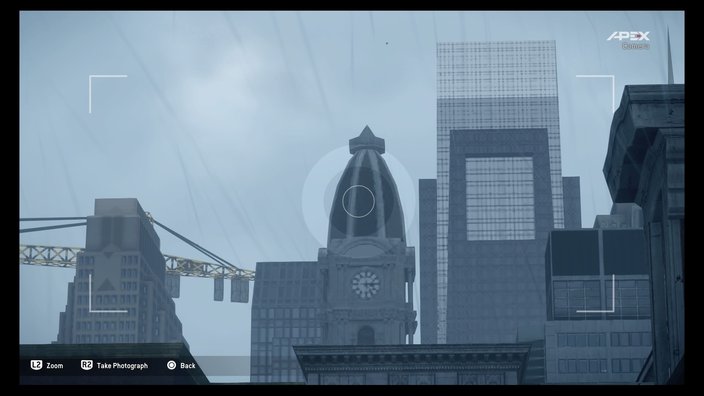 The "Homefront: The Revolution" design team must have seen the inside of City Hall, because the hallways and the mayor's office pictured in the game evoke elements of the real building. The room – especially the ceiling – where your player confronts the corrupt mayor in the game resembles City Council Chambers. 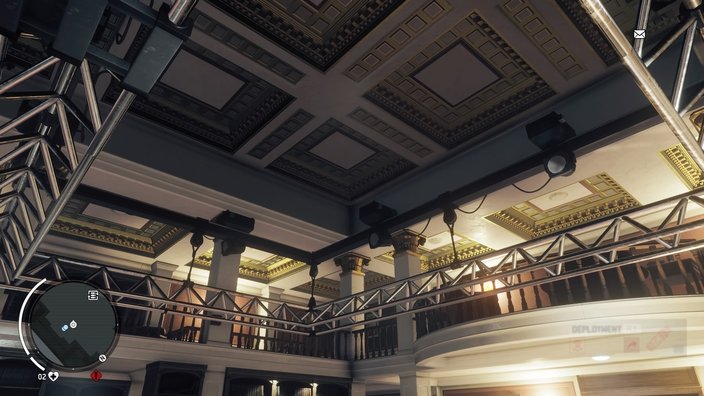 The ceiling of the mayor's office in Homefront: The Revolution is very similar to the ceiling of City Council's caucus room at the real City Hall.

Those are the landmark sights to see in the game. They are built as focal points and mostly, missions are built around those landmarks. But "Homefront: The Revolution" also peppers its play with random Philadelphia-style elements and accessories. Rowhomes, especially, look like pretty much like what you'd see walking down any street in the city. There was obviously time taken to make sure some of the city's most noticeable sights made the transition into virtual space. 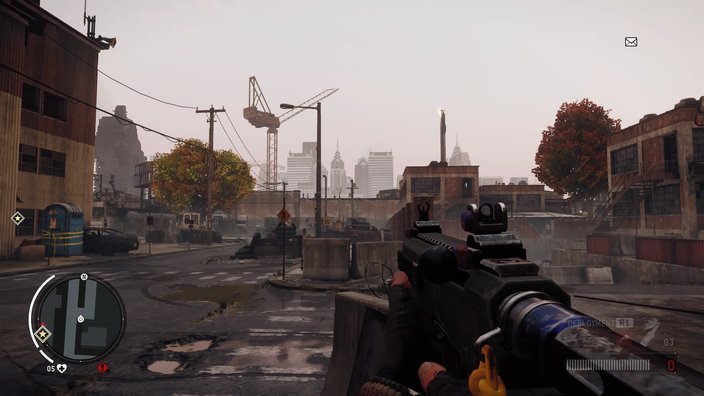 In this early level, you get a full shot of the Philly skyline.

The skyline is visible through much of the game. The Comcast Center can be seen in a late level and, what looks like the Liberty Bell, can be seen on top of a building nearby. 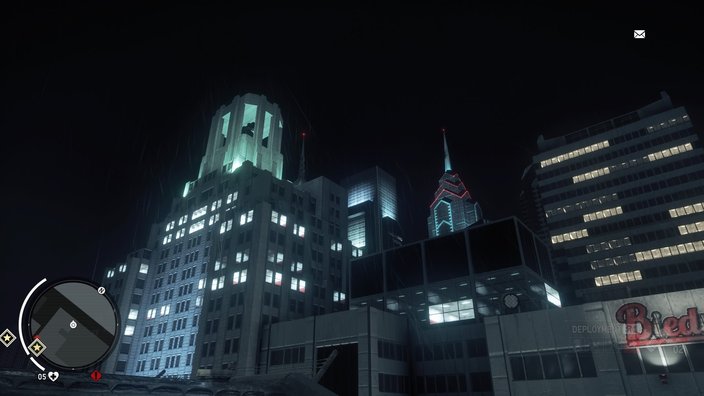 Even the Comcast Center makes an appearance in Homefront: The Revolution. 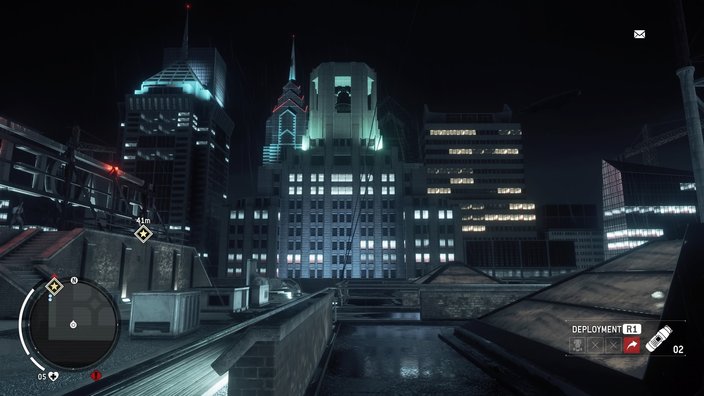 There's no actual site for the Liberty Bell in the game, but it looks like there's a virtual Liberty Bell placed on top of a skyscraper.

But, there are some other great touches, too. 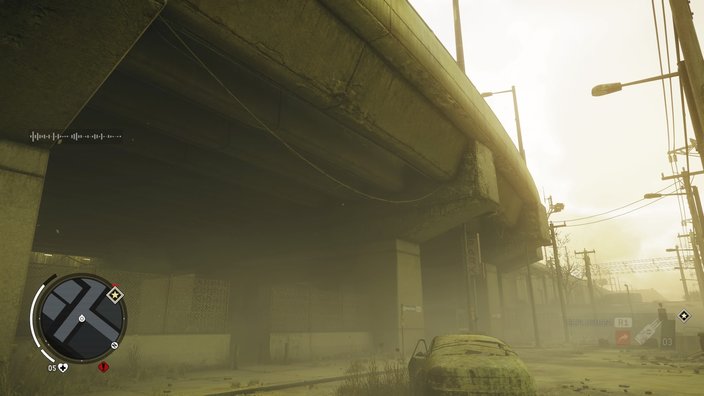 Here's a view under 95 in Homefront: The Revolution.

When you make your way through the game, you'll come across highway overpasses that aren't explicitly said to be I-95, but it's hard to mistake this huge concrete structure for anything else. 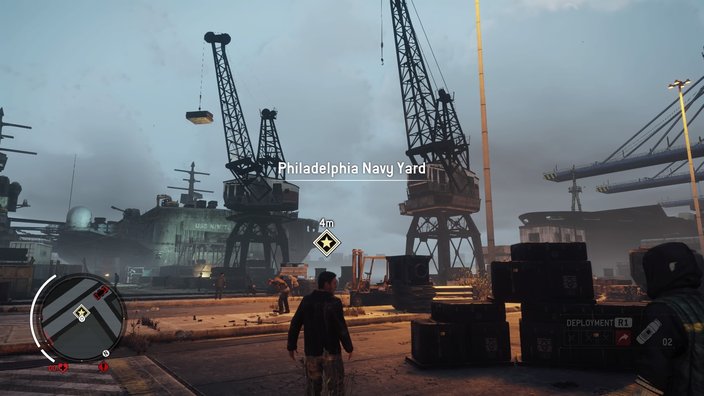 The Navy Yard makes an appearance in Homefront: The Revolution. But, the S.S. United States was nowhere to be found.

And, while the famous South Philly Ikea (or the neon-lit strip clubs nearby) aren't in "Homefront: The Revolution," the Philadelphia Navy Yard makes an appearance. 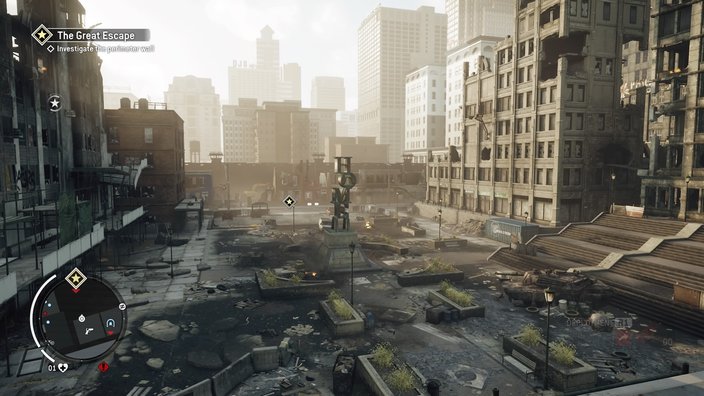 Technically, this plaza in the game is never called Love Park in the game and it doesn't even have the iconic LOVE statue. But it does evoke the city's famous Center City green space, with a statue that says "home" and has a small Liberty Bell designed in the "o" in "home." There's no fountain, though. 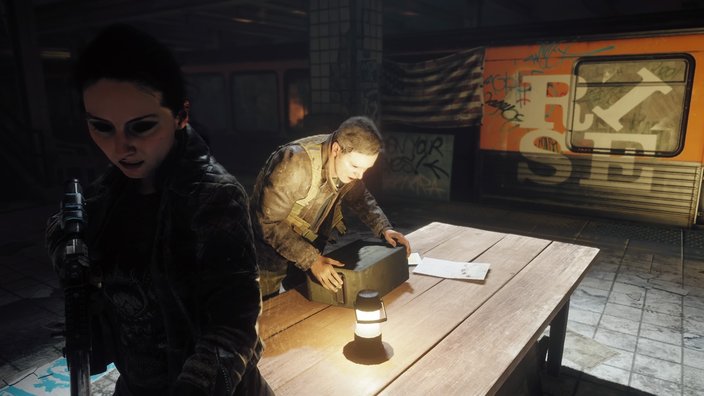 While the iconic Love statue from Love Park was changed in the game, the revolutionaries have incorporated its design in propaganda.

The LOVE statue design isn't completely forgotten, however, as it has been repurposed as propaganda for the revolutionaries you fight for.

SEPTA trollies and subway cars make an appearance here and some great detail was put into the cars on the Broad Street Line, especially. 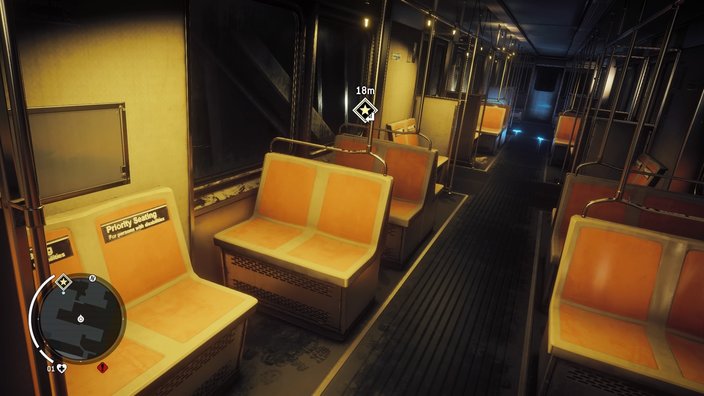 There might be accuracy issues elsewhere, but the seats on the Broad Street Line subway cars look correct. 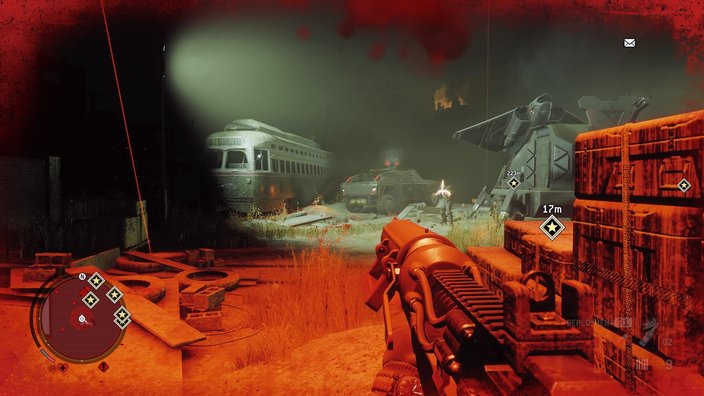 While there's no mention of Girard Avenue in the game, at times the player can find a few of the avenue's iconic Route 15 trolley cars.

VIEWS FROM THE NEIGHBORHOOD

Then there are the little touches. The things that make Philly, Philly. And while they don't get all of it (there's no Rocky, no Pat's or Geno's, no South Street, no Schuylkill River, no colleges, no Fairmount Park, no stadiums...etc.) there are some highlights. 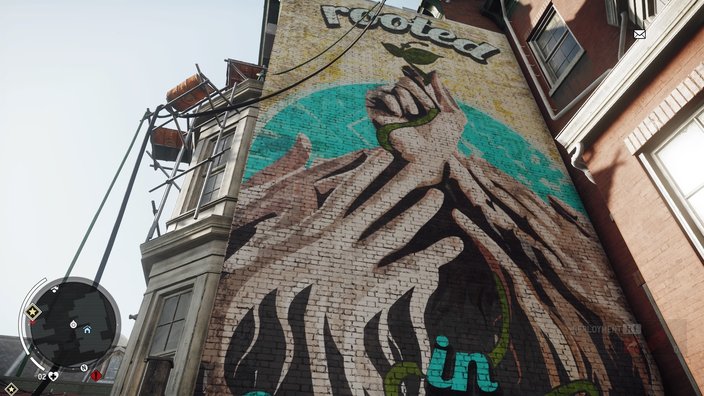 Many buildings throughout the game have murals - just like the actual city. Though, we couldn't find any actual murals. This one says "Rooted in Community."

Rowhomes throughout the game have various murals. This reporter didn't see any murals that were recognizable, but many that were similar. Also street signs look like actual signs throughout the city. And, even small touches like phone numbers on ads and in your in-game cell phone, are all 215 numbers. 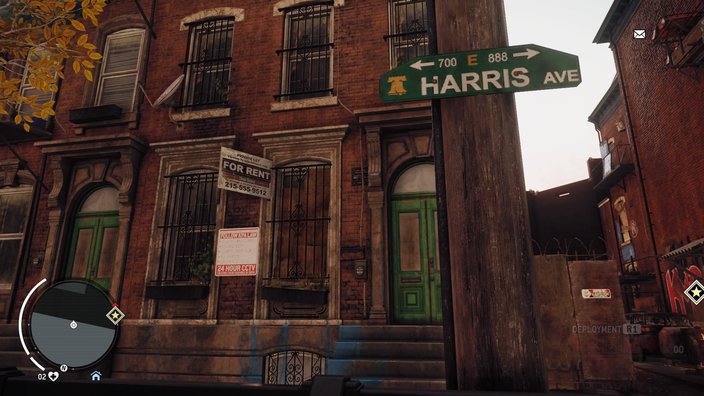 The game gets the designs of the city's street signs right, but uses names of fictional streets. Also, phone numbers in the game all start with 215. 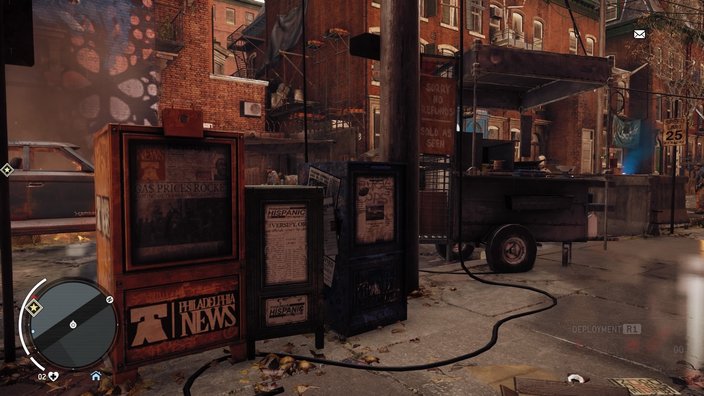 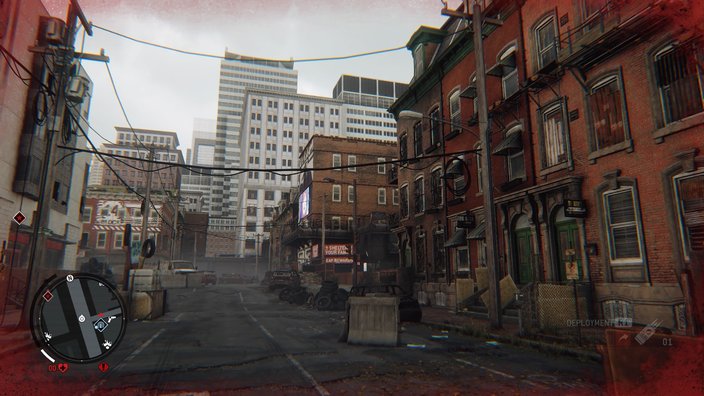 A typical street in Homefront: The Revolution. Many of the row homes in the game are open to exploration and hide secrets for players to find.

The team also remembered their roots by throwing in a nod to their home in England. 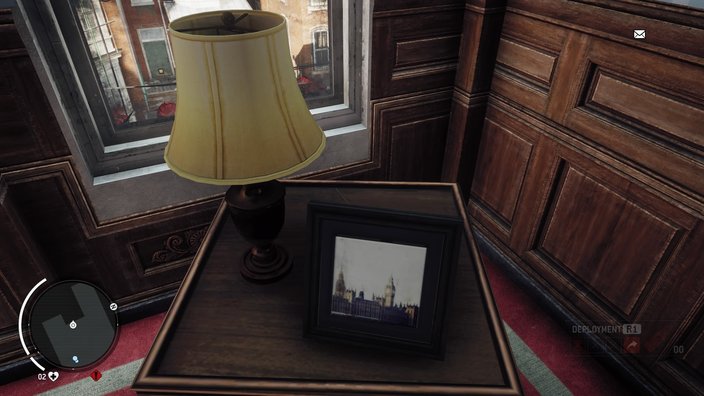 Dambuster Studios remembered its roots in England with this photo of London in Homefront: The Revolution's virtual Philadelphia.

Overall, the level design throughout "Homefront: The Revolution," makes it worth a look for anyone who loves the city, just to see what made the jump from real life into this virtual war zone.

And, the designers even tried to fit in a little bit of the famous Philly attytood as well. 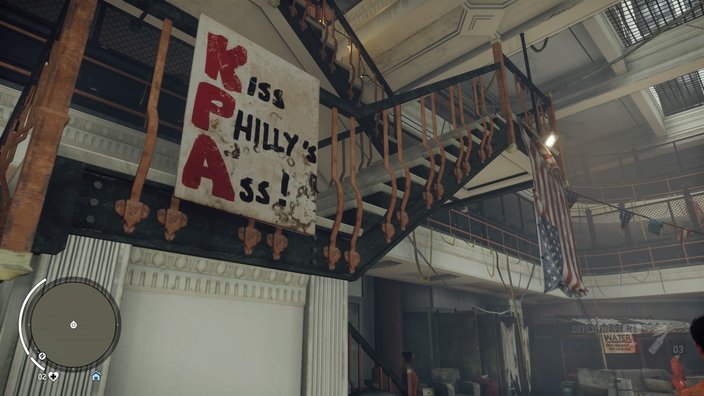 Even in video games, Philadelphians have attitude.