How did slides of Albert Einstein's brain wind up in Philly?

The fate of the great theoretical physicist's brain has multiple local connections. 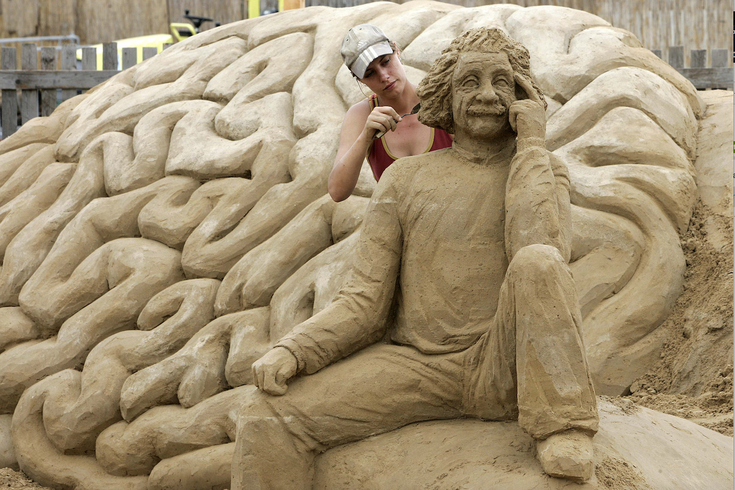 Susanne Ruseler from the Netherlands carves Albert Einstein and his brain out of sand for the sand sculpture festival "Sand World" in Luebeck-Travemuende at the Baltic Sea, northern Germany, on Monday, July 2, 2007.

Curiously, Einstein's legacy in the development of modern physics was accompanied upon his death by another kind of mystery, one that has direct ties to Philadelphia and New Jersey (where Einstein had lived and been affiliated with Princeton University).
The exact whereabouts of Einstein's prodigious brain went unknown for 23 years, until a journalist named Steven Levy was assigned to hunt it down for a spring 1978 cover story in the regional 'New Jersey Monthly' magazine.
Prior to Einstein's death from a heart aneurysm, he had told his biographer he wanted to be cremated and have his ashes scattered along the Delaware River. He had also insisted that his brain be used for research.
Levy's job as a reporter, colorfully detailed in a recollection on Medium, was to track down the pathologist Thomas Harvey, who performed Einstein's autopsy in 1955. From that April day on, the journey of the brain remained shrouded in secrecy, as Harvey and other officials at Princeton were nervous to disclose what effectively amounted to a theft of the contemporary world's most celebrated brain.
Eventually, Levy tracked down Harvey in Wichita, Kansas, where he got a very reluctant but full account of what happened to the brain. In fact, parts of it were actually preserved in the room where they sat, contained in a jar in pieces that Levy compared to Goldenberg's Peanut Chews. From Levy's account:

After the autopsy Harvey had measured and photographed the brain at Princeton Hospital, he told me. The anatomical variations were within the normal range. It weighed 2.64 pounds. Then he placed it in a jar of formaldehyde, and carefully drove to Philadelphia, where there was a rare instrument at University of Pennsylvania called a microtome, used to section brains. The team preserved the brain in small chunks of celloidin, a gelatinous material. Other parts were preserved on slides. A bit of it remained unsectioned.

The cover story was picked up by the Associated Press and published all over the country, initiating a scientific quest to determine how Einstein's brain may have given him an enhanced ability to visualize and interpret his theoretical insights. Some of those findings are considered by many to be inconclusive, in part due to the difficulty of obtaining information from a dead, as opposed to a living brain. Nonetheless, that hasn't stopped researchers from examining and postulating about Einstein's brain.  There's even an app for his brain atlas.
In 1998, after much fanfare, Harvey returned what he had of the brain to Princeton University, before his death in 2007.
Four years later, in 2011, Philadelphia's fascinating Mütter Museum received a call with an offer of one of Harvey's box of slides, obtained through a chain stretching back to the neuropathologist who first helped him slice it up.
And ever since, Philadelphia has been the only place in the world with a permanent exhibit of Albert Einstein's brain.
Here's Steven Levy's TED talk on chasing down the story.