Calculating the phallic properties of the statue atop Philadelphia's City Hall 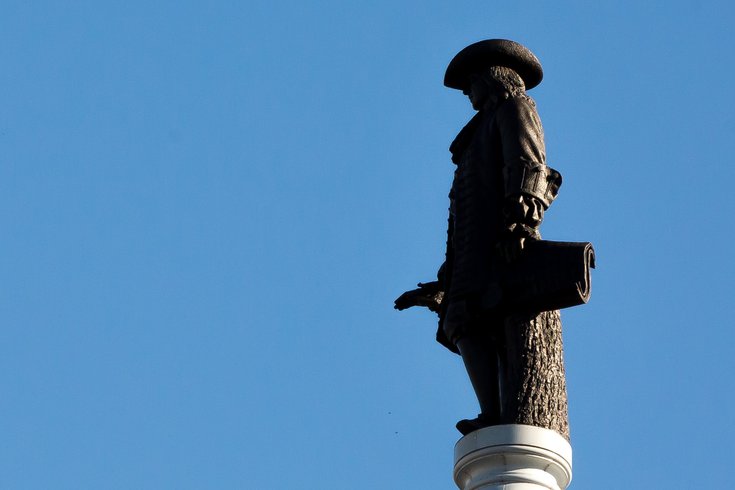 It's a hand, we know, but what if... The bronze statue of William Penn atop Philadelphia's City Hall stands 37-foot-tall.

As you may already know, William Penn kind of invented Philadelphia and the commonwealth of Pennsylvania after hammering out treaties with the Lenape Native Americans.

He also adorns the top of Philadelphia’s City Hall. Well, at least a statue of him does. And that’s what I’d like to draw your attention to today.

Alexander Milne Calder’s 37-foot homage to Penn was installed atop the building in 1894. It remained the tallest point in Philadelphia until One Liberty Place arrived on the skyline (and sparked the fabled “Curse of Billy Penn” in 1987.

Here’s how Waymarking.com describes the statue through its Smithsonian Art Inventory:

Standing portrait of William Penn at thirty-eight. He stands erect, his proper right hand extended to offer a blessing.

In his proper left hand he holds a scroll and leans against a tree stump. He is dressed in a long buttoned jacket, shirt with ruffles at the neck and cuffs, knee britches, stocking, shoes with buckles, and a broad-brimmed hat.

His hair is long and he stares down at the ground.

Now that we have all that out of the way, let’s discuss a totally mature aspect of how that statue appears in some angles looking from the west and northwest. (The Benjamin Franklin Parkway affords one perspective.)

In a phallic sense.

Yes, I’m mature to the point of sometimes, when I see it from the aforementioned angle, giggling like a school boy named Beavis and/or Butthead.

Others have noticed this too, of course. (See here, here, here and here for starters.)

In the news business, we set out to provide answers to the day’s most-important questions. Even "what if" questions.

The question I set out to answer in recent days is this: How, uh, big is William Penn’s bronzed junk?

It wasn’t as easy as you’d think. 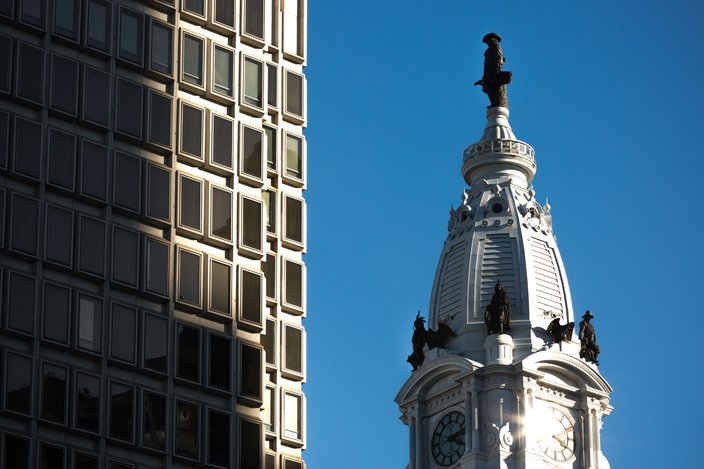 The statue of William Penn atop Philadelphia's City Hall, as seen from the 1500 block of Arch Street.

Knowing the statue stands 37-feet tall, the pursuit of answers started with a baseline need to determine Penn’s real-life height.

Visual descriptions of Penn indicate he was "fairly tall and athletic" as a young man, but there was no readily accessible measurement in this respect.

So I reached out to both historians and officials at the East Falls charter school that bears his illustrious name. (They didn't know why I was asking. So, uh, sorry, folks!)

“We found no record of his height, and nothing said that he was short or tall, so going by the averages of the day, we’re guessing he was about 5 (feet) 6 (inches) tall,” said Sharon Sexton, director of marketing and communications at William Penn Charter.

We also checked in with the Historical Society of Pennsylvania in Philadelphia to determine whether the folks there might have a clearer answer.

“That's a really interesting question,” responded Lee Arnold, HSP’s chief operating officer and senior director of the library and collections. “If the proportions on his statue on top of City Hall are correct, he should be around 6 feet.

“However, just to be sure, I called Pennsbury Manor – the state historical site about Penn – but they, too, did not know.”

Taking all that into account, we’ll use three heights: 5-foot-6, 6-foot and 5-foot-9 since it’s right in the middle.

Now, it was on to determining just how much that hand of Penn’s protrudes, making it appear to be a Penn pecker.

Joe Gunter is a mechanical engineer who responded to my Twitter call for people good at scaling images.

“That’s a 4-foot wanger,” he responded, showing his work by explaining that he did some cursory measurements that showed the hand – as seen from an image – “is about one-ninth the size” of the overall statue.

“I’ve read too much on this because of you,” he added. “Average penis-to-hand ratio is about 71.6 percent. … My targeted ads are going to suck.”

We’ll work off these numbers: The statue is 37-feet tall and the visible portion of the hand “from fingertip to wrist” is roughly 4 feet in length when scaled. 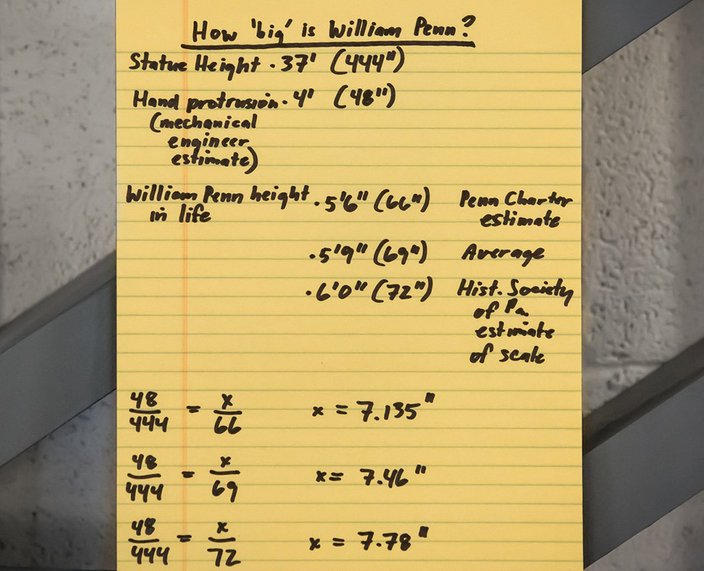 When the statue atop City Hall is viewed from certain angles around Philadelphia, William Penn's right hand appears to be a penis. We endeavored to perform the mathematical calculations to answer the question of how big a man was the city's founder. Since Penn's exact height was difficult to determine, we worked with three reasonable hypotheticals.

AND THE ANSWER IS...

Now, onto what you’ve waded through about 700 words to learn.

If that angle actually showed Penn’s penis, how long would it be? (Circumference and such was not really a statistic we could delve into without crawling atop City Hall with a tape measure.)

And how would it compare to the average length of an erect penis – 5.16 inches – as determined by scientific study?

And, if the 6-foot estimate held true, the Penn Peen atop City Hall indicates his real-life willie was 7.78 inches long.

Thanks for reading. Feel free to use in fun-fact trivia fashion and if your calculations arrive at different answers, by all means share it in the comments or via email.

This is the sort of thing that we'd like to get right – lest Penn put another curse upon us.