It's all about stomach science and water stretching 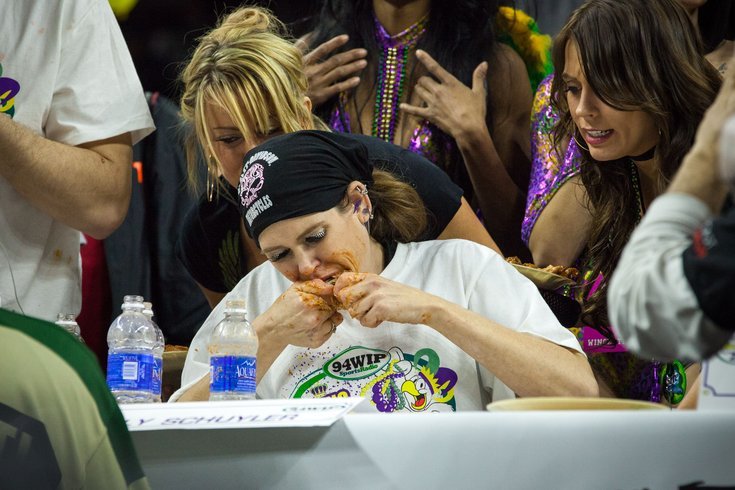 As Philly's most notorious bacchanalia, the SportsRadio 94WIP Wing Bowl makes local and national headlines every year for its drunk and disorderly attendees, scantily clad Wingettes, and all-around debauchery.

This year's event will take place before the crack of dawn Friday at the Wells Fargo Center. But lest we forget, amid the early morning beer and breasts, the Wing Bowl at its heart is still an eating competition.

The goal is to eat as many chicken wings as possible in two 14-minute rounds and a final 2-minute head-to-head round. Last year, Patrick Bertoletti inhaled a record-breaking 444 wings in the allotted half-hour to become the 2015 champion. If we estimate that the average chicken wing weighs roughly 21 grams with bone and skin removed, Bertoletti ingested more than 9 kilograms or 20 pounds of food in a single sitting – probably a conservative guess, since competitors eat the skin as well as the meat.

That raises a lot of questions.

How is this humanly possible without vomiting (termed a “reversal of fortune” in competitive eating circles, meaning disqualification)? Do these competitors possess unique skills they were born with, or can anyone train to become the next Wing Bowl champion? And lastly, is this “sport” even safe?

For Dave “U.S. Male” Goldstein, a contestant in this year's Wing Bowl and the 2013 local champion, competitive eating has its roots in both innate talent and hard work.

“Everybody knows somebody who eats too fast all the time, and I was that person,” said the 48-year-old mailman from Voorhees, Camden County. “My friends talked me into doing the Wing Bowl when it first started, as a joke. Finally in 2007, after years and years of my friends hassling me, I finally gave it a shot — I got fifth place.”

At that point, Goldstein didn't know all the ins and outs of speed eating, but his solid performance as an inexperienced amateur piqued his interest. At his first Wing Bowl, he learned from the other competitors about a training technique called water stretching. Because the stomach is a distensible organ, meaning it can expand, professional eaters use incremental amounts of water to stretch it out. By blowing up the stomach like a balloon over and over again, Goldstein was able to drink up to two-and-a-quarter gallons of water in the matter of minutes.

“When he lifted up his shirt before the study, he had a flat abdomen and was in great shape. Afterwards, he looked like he had a near full-term pregnancy!” – Marc Levine, HUP chief of gastrointestinal radiology and study author

“We'll drink a lot of water and, as sick as it is, we'll get rid of it right away. Each day, you do the same thing. You drink more and more until you get to a point where your capacity is just incredible,” said Goldstein. “Some of the best competitive eaters do as much as 3 gallons of water in a period of 4 to 5 minutes.”

“Most foods are a 'cram-jam-swallow' routine, whereas wings are a tactical food,” he said. “You have to attack them differently – drumsticks, it's called 'The Twirl' where you put the drumstick in your mouth and just twirl it real quick. There are other tactics for the wing, like breaking it and popping it in your mouth in one quick motion. The best wing eaters can eat 12 or 20 wings per minute.” 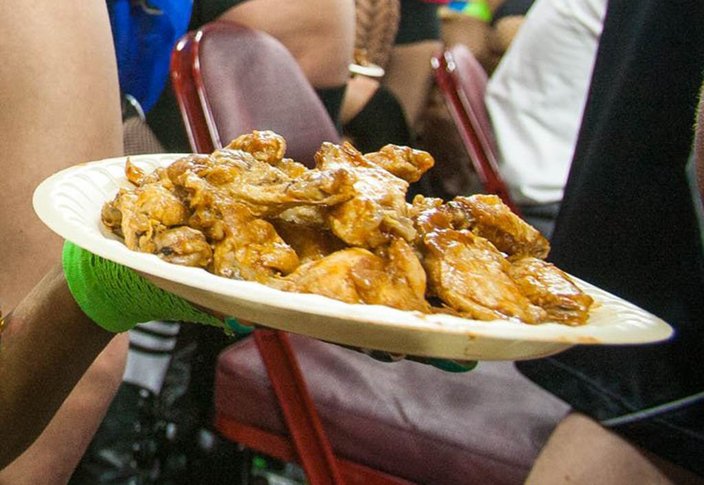 A plate of P.J. Whelihan's chicken wings heads to a contestant during the 2015 Wing Bowl event.

The entirety of scientific literature on competitive eating comes down to a single paper, published in the American Journal of Roentgenology (another name for radiology) by researchers at the University of Pennsylvania. Titled “Competitive Speed Eating: Truth and Consequences,” the study assessed the stomachs of two individuals — one a world-class speed-eating champion and the other a control subject — in a gastrointestinal X-ray suite as they ate as many barium-coated hot dogs as possible. Barium, a chalky powder that gets mixed with water to form a paste, was used as a contrast agent to see the food passing through the gastrointestinal tract since it absorbs X-rays.

“The whole purpose of our study was to try and figure out how do speed eaters do it? How are they able to eat so much, so fast?” said first author Marc Levine, chief of gastrointestinal radiology at the Hospital of the University of Pennsylvania. “It had to be one of two things: They eat faster because their stomach empties faster, or they have a very unusual type of stomach that is able to expand indefinitely like a compliant sac to take in this huge amount of food.”

“Most competitive eaters are actually in shape and work out. It's real stereotypical that just because you're a competitive eater, you're 400 pounds and a big guy – but that's not really the way it is.” – Dave Goldstein aka U.S. Male, Wing Bowl contestant

First the researchers tested the control subject — a 35-year-old man reaching 6-foot-2 and 210 pounds with a hearty appetite. Levine and his colleagues watched seven hot dogs go through his esophagus and into his stomach, but as soon as they saw his stomach had become minimally swollen or distended, the control subject stopped and mentioned feeling uncomfortably stuffed. In other words, his satiety reflex had been triggered.

As the stomach expands, internal nerve receptors sense this pressure and send “I'm full!” signals to the brain through the vagus nerve. This signal, called the satiety reflex, tells us we've had enough and prevent us from overeating.

Next up was the competitive eater, whose gastrointestinal X-rays painted a very different picture. He used his traditional speed-eating technique of breaking the hot dogs in half and forcing them into his esophagus without chewing. When he reached a total of 36 hot dogs in 10 minutes, Levine and his colleagues told him they had seen enough – even though he was happy to keep eating.

“His stomach expanded to accommodate these hot dogs to an absolute staggering degree, to the point where the stomach filled up most of the abdominal cavity,” said Levine. “When he lifted up his shirt before the study, he had a flat abdomen and was in great shape. Afterwards, he looked like he had a near full-term pregnancy!”

With the control subject, the researchers saw hot dog pieces emptying from the stomach into the small bowel soon after the test was over. Our stomachs normally break up our food through mechanical churning called gastric peristalsis before it enters the small intestine. But the competitive eater had no such gastric peristalsis activity, which meant all those hot dog pieces just sat in his stomach without being emptied.

“I questioned him, and he indicated that normally he ate three meals a day,” Levine said. “But after a speed eating contest, he wouldn't eat for sometimes up to a week. Like how lions devour a zebra and may not eat for weeks, it's the same thing.”

All this disruption of the normal physiology of the stomach leads Levine to believe that competitive eating may not be a completely safe sport in the long run. He worries that in overcoming the satiety reflex and losing the ability to feel full, speed eaters could easily become obese. Or, even worse, the stomach could lose its elasticity altogether and just end up like a big, baggy sac – which would cause recurrent nausea and vomiting, or even require removal of the entire organ.

Goldstein, however, isn't really concerned about the health risks of competitive eating. He became a endurance marathon runner during his brief retirement since 2014, and during that period, he believes his stomach shrunk back down to a normal size.

“Most competitive eaters are actually in shape and work out,” Goldstein said. “It's real stereotypical that just because you're a competitive eater, you're 400 pounds and a big guy – but that's not really the way it is.”