94WIP event is biggest day of the year – by far 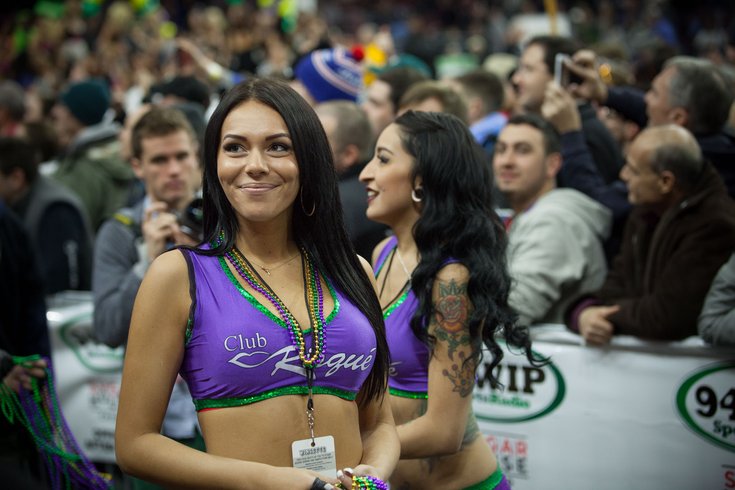 A representative of Club Risque smiles at Wing Bowl 23 at the Wells Fargo Center.

The SportsRadio 94WIP Wing Bowl, an annual eating contest both revered and reviled for its drunkenness, debauchery and lewdness, returns Friday for its 23rd edition.

The beer will flow freely at an hour more commonly known for nursing hangovers. Contestants will gorge themselves on chicken wings. And a few daring women will flash whatever skin they aren’t already revealing.

But for many of the 20,000 mostly male attendees, the fun does not stop when the formal festivities wrap up at 9 a.m. In no state to report to work – and certainly not ready to return home – many have adopted another Wing Bowl tradition:

The tradition has grown so prominent that Wing Bowl marks the busiest day of the year for most – if not all – local strip clubs.

“It’s like the national holiday for gentlemen’s clubs,” said Jasmine, a marketing associate for Delilah’s in Old City. “It’s like our New Year’s Eve.”

‘THE DAY THAT GETS ME THROUGH WINTER’

Wing Bowlers begin arriving at Daydreams in droves around 9 a.m, co-owner Steve Gross said. Within two hours the all-nude club is filled to the point that it becomes difficult to move around.

“They’re standing in line for the food, the beer and the bathroom,” Gross said. “It’s a beautiful thing. It’s something you have to see to appreciate. It’s hard to describe.”

The same people return year after year to the Tacony establishment, Gross said. The crowd – a mixture of blue-collar and white-collar types – includes scores of patrons who do not visit at any other time of year. 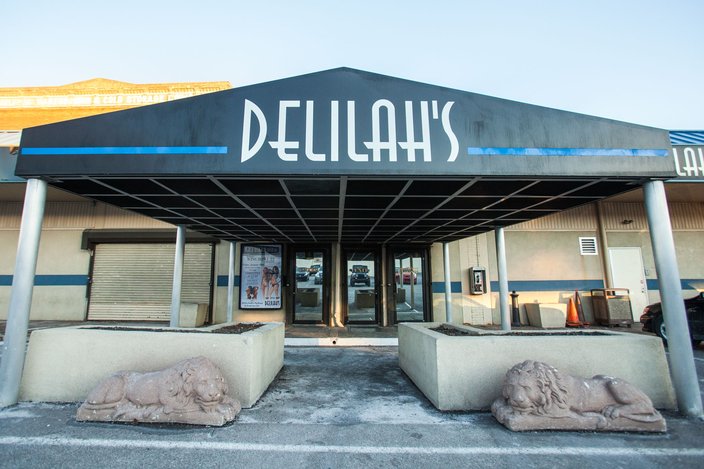 "There's no such thing as too much staff on Wing Bowl," says a Delilah's spokeswoman. (Thom Carroll/PhillyVoice)

“It’s such a zoo,” Gross said. “It’s not rowdy. As drunk as they may be when they get there – which is usually a bad thing – they’re just really fun-loving. They’re out to have a good time.”

To satisfy demand, Daydreams brings in 69 dancers – way above the 25-35 women the club typically employs for a weekend evening.

The event, which at first grew exponentially, reached its revenue capacity about eight years ago, Gross said. He called the day a financial “shot in the arm” during the slow winter months.

“It’s a good percentage of a January or a February,” he said. “They’re the worst months of the year. I call it the day that gets me through winter.”

A similar scene plays out at Delilah’s, where Wing Bowlers are presented a free breakfast followed by a pig roast lunch and dinner. Rock n’ roll music pounds through the speakers as more than 100 dancers ditch their standard gowns in favor of two-piece outfits.

The goal, said marketing associate Jasmine, who asked that her last name not be used, is to make the atmosphere more fun and “a little less over-the-top and upscale.”

Apparently, the formula works. Wing Bowl is “by far” Delilah’s busiest day of the year, Jasmine said, though she declined to reveal the day's bottom line.

“We have every bar staffed completely,” Jasmine said. “Every revenue center has extra people. There’s no such thing as too much staff on Wing Bowl.”

Angelo Cataldi did not envision Wing Bowl – and all its associated traditions – becoming the event it did when he and his WIP-radio co-host, Al Morganti, first organized the radio promotion in 1993 in a hotel lobby. The event now fills the Wells Fargo Center in South Philadelphia. [Full disclosure: Cataldi and Morganti write columns for PhillyVoice.com.]

“We oversaw bringing a few fat guys together to eat chicken,” Cataldi said. “All the rest of this came about on its own.”

The involvement of strip clubs first began about 10 years into the promotion, Cataldi said. The clubs recognized a unique opportunity to pull in hundreds of patrons afterward by having their dancers appear as Wingettes – mostly scantily-clad women who serve as part of a contestant's entourage. Many Wingettes – who are not all strippers – wear low-cut lingerie or other provocative attire.

“They piggy-backed on Wing Bowl and then began to buy sponsorships on individual contestants,” Cataldi said. “With those sponsorships came an opportunity to parade their girls into the arena. It all took off with no planning of ours of any kind.”

As part of their sponsorships, many clubs have their dancers appear on Cataldi’s morning radio show at 94.1FM to promote their Wing Bowl after-parties. Women from Club Risque, Show and Tel, Cheerleaders and The Oasis have all made appearances on the show and are promoted on Wing Bowl's website.

Those appearances are part of the way Wing Bowl is promoted, Cataldi said. Other sponsors – bars like McFadden's and Field House – receive similar opportunities to promote themselves.

In recent years, some clubs have nicknamed their after-parties as "Legs and Eggs," "Boobs and Beer" and "Breast Bowl," and used social media to advertise the events.

Yet, the involvement of strip clubs has created a “double-edged sword,” Cataldi said. Many attendees enjoy the Wingettes' sex appeal, but that also has created backlash.

Organizers must distinguish Wing Bowl from the happenings at such clubs – all while maintaining the party atmosphere the crowd enjoys.

“We can’t start excluding people,” Cataldi said. “That’s wrong. They’re welcome as much as anybody else, but we’ve got to keep them in the parameters of what’s legal. It’s been a tug of war now for over 10 years with how far can they go and how far can’t they go.”

Women throughout the stands have been known to flash their breasts for the videoboard, a trend Cataldi said organizers have tried their best to prevent.

“What I would love people to know is that we are aware of the negative element of it and have tried to control it,” Cataldi said. “But we don’t want to suppress it either because it’s part of the party atmosphere that we do.

"It’s a tug of war every year. And every year we don’t know if we got it right, but we keep trying to get it right.”

Not everyone revels in the festivities at Wing Bowl and its ensuing strip club parties.

The event has received its share of criticism for its gluttonous nature and its objectification of women. Writers for both national and local media outlets have derided the event over the years, questioning whether the event should continue.

The King’s Men, a Catholic nonprofit that has fought the pornography industry, has been among the most vocal opponents. The Quakertown-based group held a rally outside the Wells Fargo Center last year, attempting to minister to men as they entered and exited Wing Bowl. 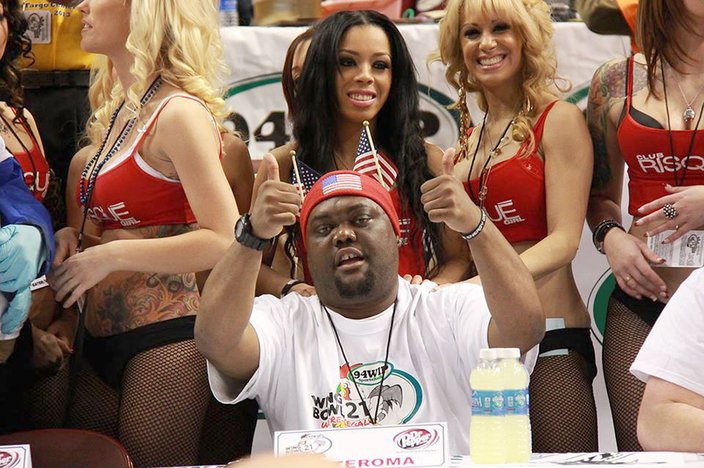 Dancers from Club Risque with a contestant in the 2014 Wing Bowl. (Facebook)

This year, The King’s Men will host its own after-party at the Holiday Inn near the sports complex. The goal, president Mark Houck said, is to begin a dialogue about healthy marriages and the objectification of women.

“One of the things that is core to our mission is to build up men as leaders, protectors and providers,” Houck said. “When we see an event like the Wing Bowl, we see a lack of leadership, a lack of protection and a lack of provision.”

“When people go there expecting one thing and see another, they really don’t know how to process it,” Houck said. “Nobody wants to say, ‘Hey, this is wrong.’”

Cataldi said he understands the backlash Wing Bowl has drawn, admitting he has his own misgivings. He acknowledged the event objectifies women, but said Wing Bowl is not designed for everyone. He said the organizers have taken the event where its participants wanted it to go.

“All that bothers me is that the people that hate it the way they hate it don’t at least feel that people deserve to do it without them trying to stop it,” Cataldi said. “There’s nothing going on in there that requires them to be so upset. It’s just a bunch of guys.

“We’re not politically correct that day – fully understood. The stuff that goes on in there is on the edge of good taste, if not slightly over it. But we’re not breaking any laws. We're doing everything we can to keep everything on the up and up.”

‘FULL DAY OF WINGS AND … THINGS’

Anthony Turchi, 27, grew up just a couple blocks from the sports complex. He had heard about Wing Bowl since he was a child, but attended for the first time in 2011 with a handful of friends.

“It was pretty intense,” said Turchi, who went again the next year. “You have a packed house full of drunk guys. Everything you hear – that’s exactly what it is.”

Turchi and his friends did not head out to the strips clubs, instead opting to unwind at a local bar – another popular destination for Wing Bowlers. But he said the strip clubs push their after-parties at Wing Bowl.

“Everyone goes in there knowing they’re going to go out afterward,” Turchi said. “All these gentlemen’s clubs have these big promotions. … They try to lure you in. That’s, like, a big thing for afterward.”

Some guys head out in style, too.

Dawn White, manager of PrimeTime Limousine, said half its 11-vehicle fleet typically is reserved by Wing Bowlers on the day of the event, some of whom direct their drivers to strip clubs.