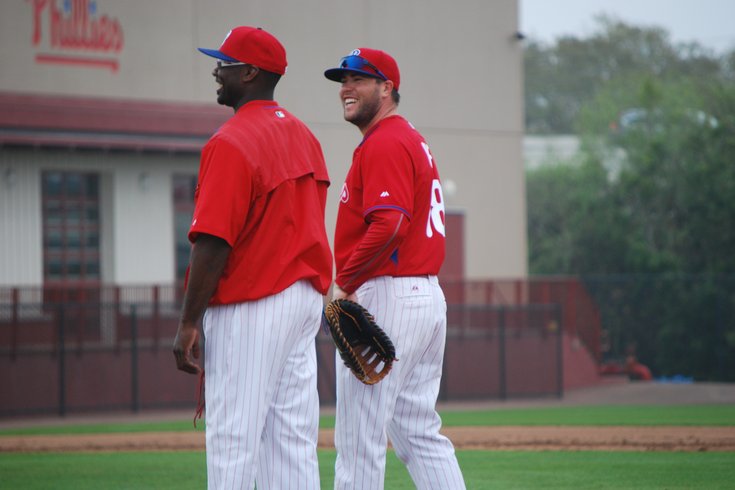 Darin Ruf and Ryan Howard share a laugh during infield work in Clearwater.

CLEARWATER, Fla. – In case you were off the Philadelphia sports grid in the last 72 hours, Ryan Howard hasn’t accepted the fact that he’s no longer the player he once was when he was winning National League home run and RBI titles, claiming an MVP trophy, and leading the Phillies to a run of postseason wins that led to a World Series crown.

Howard was given ample opportunity to explain himself. He was even thrown an easy, softball of a question (from yours truly) that he could have used to escape the proverbial hole he was digging in his press conference, when he basically said his struggles at the plate in the last few years were a media creation.

Isn’t the game tougher now at age 36 than it was when you were 26? That’s just natural, right?

“No, not really,” Howard said. “I think if you take care of yourself and eat right and do all that good stuff, I think you’re all right. I think (Jamie) Moyer is out there trying to play somewhere and I think he’s the epitome of all that. Moyer played through his mid-40s and I think if you go and continue to take care of yourself and you continue to be productive, why not play as long as you want?”

Well, I’d also like to suit up in a major league uniform this April and give it a go, but it’s probably time we all wake up to reality.

Howard won’t be in a Phillies uniform is his 40s, or even in his late 30s since he’ll hit the free agent market a few weeks before his 37th birthday in November. How much he plays in 2016 could depend on how well he plays in March or April …. but there’s another factor at play, too.

The Phillies don’t have a top prospect on Howard’s heels, one ready to take over the everyday job at first base. But they do have a viable option in 29-year-old Darin Ruf.

All of the talk after the first week of workouts in Clearwater regarding the first base position has been on Howard, which is natural given his standing as the longest-tenured player within the organization, along with the remaining dollars on his massive contract and declining productivity. But, as manager Pete Mackanin mentioned recently, there is the other guy in the clubhouse who plays the position, too.

Ruf was one of baseball’s most productive hitters against left-handed pitchers last season. In fact, among the 224 major league hitters with at least 100 plate appearances against lefties, no player had an OPS superior to Ruf’s (Seattle’s Nelson Cruz also had a 1.107 OPS).

“Darin Ruf is a pretty good weapon against lefthanded pitchers,” Mackanin said. “So as well as worrying about Howie, I’m worried about Darin Ruf, I’d like to get him in the lineup against lefties because he does such damage against them. So, you know, it works both ways. The plan is to come up with the best combination where Howard is going to get sufficient at-bats to have a good year and so is Ruf, and you combine the two, and if we have a super year out of first base, it’s going to benefit the team.”

If Mackanin goes with a straight platoon, and both the lefthanded-hitting Howard and righthanded-hitting Ruf repeat last year’s performances against righthanded and lefthanded pitching, respectively, the Phillies could get productivity that would rank above league average in 2016.

If you combined their respective split numbers last season (Howard vs. RHP and Ruf vs. LHP), the two-headed first base monster of Howard and Ruf had an .867 OPS against opposite-handed pitching. Only five major league first baseman had a better OPS in 2015 and only 18 qualifying major leaguers, regardless of position, had a superior OPS.

It’s a fun way to look at the numbers, but it’s also asking for both players to repeat their 2015 numbers, which could be asking a lot.

A straight platoon would seem to be the most likely scenario for the start of the season, but there is also a chance Ruf could play more, period, in 2016. If Howard isn’t producing - and any last ditch efforts or pipe dream-type hopes to trade him before the deadline are finally diminished - there is really no explanation to keep playing him more often than a young player who could have value on your roster going forward.

The Phillies basically ran through this process last year at the catching position, when Cameron Rupp began starting games more often than the catcher on the roster 10 years his senior, Carlos Ruiz.

“That would ultimately be awesome,” Ruf said of the possibility. “But I have to go out there and earn it. I have to show through how I perform on the field.”

Just as Howard, according to Mackanin, will have a chance to show he can bounce back against left-handers this spring, Ruf will also have an opportunity to make an impression, too.

"I know everyone wants to talk about at-bats and most of baseball is built around offense,” Ruf said, “but I feel like defensively I can show I can handle myself around first base, it might be a little easier to trust me with the at-bats. So we’ll see.”

If Ruf does get those at-bats and performs as he did during the only time in his career when he was a regular, the Phillies might have a useful lineup piece at worst, and, at best, someone who could possibly be a trade chip for a team looking for a righthanded bat with pop. But, as Ruf said, it’s all about earning the at-bats that would begin that process.

“I’m sure he’s read what I’ve said in the press … he knows he’s going to be in the mix somewhere,” Mackanin said. “He’s at a point, he’s (almost) 30-years-old. He’s got to put up or shut up this year. … And I think he will. But, you know, these guys have to understand the urgency of having results.”