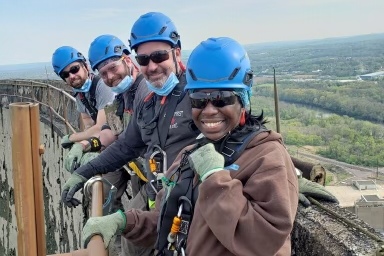 The cooling tower project consisted of climbing 510 feet to the top where Elaine and an IBEW Local 98 North team of experienced electricians had to change out the existing beacon aviation lights. Elaine McGuire, a resident of Broomall, Delaware County, was the first female electrician in the union's history to take on and complete the daunting task.

"Elaine McGuire earned a great deal of respect from her co-workers at the Limerick Nuclear Power Plant and the entire IBEW Local 98 membership for being the first female electrician to perform such an intimidating, but vitally important task," said IBEW Local Business Manager John J. Dougherty. "On behalf of the IBEW Local 98 leadership team, we congratulate Elaine on her milestone achievement."

Cindy Ortman, a long-time friend of Elaine's and a fellow Tradeswoman who's a member of Glaziers Local Union 252 added, "Elaine has been a great role model for the women in the Philadelphia Building Trades for many years! I have so much respect for her!"

For her part, Elaine McGuire found the high-flying job to be unforgettable and one she'd do all over again.

"There wasn't a time during the experience that I felt afraid," she said. "There was a moment on the first day, when I was climbing the tower at a transition point from facing the tower directly to suddenly facing the horizon, that made me feel in awe of the vastness of the view at such an extreme height. Although I had never worked at that height before, I would definitely do it again, if asked. It was a huge privilege to be the first female in Local 98 to perform the task."