If there's a SEPTA strike, more will bike

Bicycling increased by 38 percent during the last strike 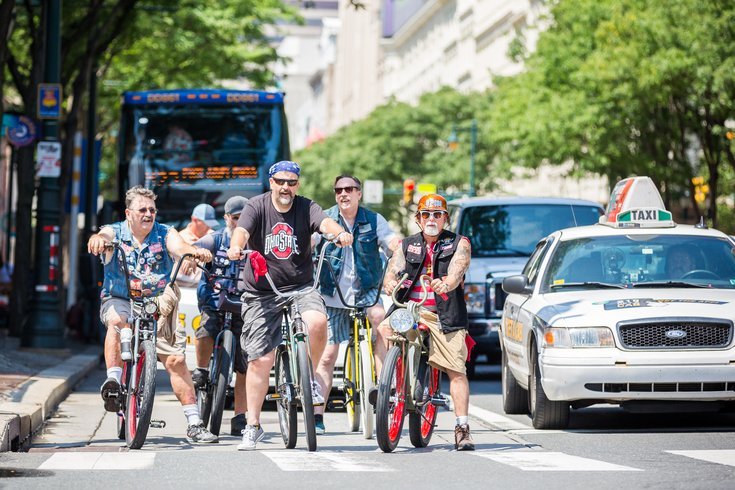 Members of the Jersey Devils Bicycling Club stop at Sixth and Markets streets near the Liberty Bell in Old City during a summer ride.

If SEPTA workers opt to strike next week, thereby shutting down buses, subways and trolleys, Philadelphians will see more motorists on the road.

But they should expect to see many more bicyclists riding to work as well.

Thousands of SEPTA riders opted to bike when Transportation Workers Union Local 234 last went on strike, in 2009. The Bicycle Coalition of Greater Philadelphia again anticipates an increase of bicyclists if Local 234 strikes at midnight Tuesday, Nov. 1.

On the second day of the 2009 strike, the Coalition counted a 38 percent increase in bicyclists during rush hour.

"Today, we have more cyclists and we have better infrastructure than we did then," Communications Manager Randy LoBasso said. "It's possible, if this does come to fruition, we may see an even bigger jump in cycling."

About 2.2 percent of commuters currently ride their bikes to work, LoBasso said. Back in 2009, that figure stood at 1.6 percent.

Philadelphia not only has added miles of bike lanes since then, but the quality of those lanes also has improved.

The city had just added its first buffered bicycle lanes, along Spruce and Pine streets, when SEPTA workers walked out for six days in 2009. Other buffered and protected lanes, with bollards, since have been added throughout the city.

But the biggest bicycling upgrade is Indego, the bike share program that launched in 2015. That could prove to be a popular option among SEPTA commuters scrambling for a new way to work or school.

"Indego bike share connects to Regional Rail, which would not go on strike," LoBasso said. "There are bike share stations near Regional Rail stations for that last mile. That's something that commuters definitely should keep in mind."

For a $15 monthly fee, Indego riders receive unlimited one-hour trips. For riders looking to pay per ride, the walk-up rate is $4 per 30 minutes.

Additionally, suburban commuters coming into the city can transport their own bicycles on Regional Rail, as long as they are not traveling during peak hours. City residents making the reverse commute can bring their bicycles on any Regional Rail train leaving the city.

LoBasso urged bicyclists to ride safely. If one feels uneasy about commuting by bicycle, LoBasso suggested they consider biking with a friend.

"One thing we saw last time — a lot of people who use their bike for recreation end up using it more for commuting," LoBasso said. "For those people, it's important to note to follow the rules, obviously. Make yourself visible in front of cars. If you're riding at night, have a light on the front and back."