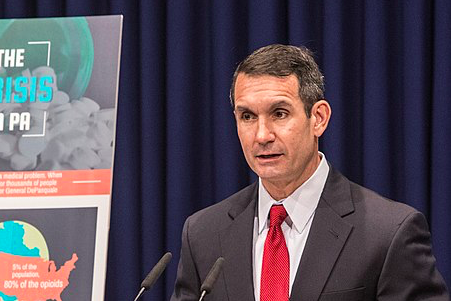 Pennsylvania Auidtor Eugene DePasquale released a report this week on the Berks County Residential Center, an ICE-operated facility that holds immigrant families who have not been charged with crimes. DePasquale and other public officials want to shut the center down or use the building for another purpose.

The Berks County Residential Center, a 96-bed facility in Leesport, is leased by U.S. Immigration & Customs Enforcement and has been used to hold immigrant families pending the outcome of legal administrative proceedings.

Conditions at the facility, one of only three such detainment centers in the United States, have been called into question by families who have been held there in recent years.

“If the federal government will not withdraw from its lease, I am urging Berks County to reconsider whether it wants to profit from the practice of detaining families who have not broken any laws,” DePasquale said Wednesday as he released a report on the facility.

The auditor general was denied a tour of the building, but said reports of the conditions there vary widely.

“Although no one being held there has been charged with a crime, the center still essentially functions as a jail in which adults and children are housed together," DePasquale said.

Pennsylvania's Department of Human Services revoked the center's license as a child residential facility in 2016 and continues to perform monthly inspections. No violations have been found since June 2018, but the center's license is once again pending before the DHS Bureau of Hearings and Appeals.

“The center costs U.S. taxpayers nearly $12 million a year to incarcerate people who are not facing criminal charges," DePasquale said. "Most are, in fact, taking the legally defined steps for asylum because of dangerous conditions in their home countries. Why these families are forced to stay in this facility while other families in identical legal situations are free to reside in the community is puzzling.”

The facility was the subject of a documentary released earlier this year by Philadelphia filmmaker Michelle Angela Ortiz, whose "Las Madres de Berks" examined the experience of four women who spent two years at the Berks County Residential Center.

The U.S. Office of the Inspector General found in 2016 that most families held at the residential center had been there for at least six months, potentially violating a federal law that states immigrant children cannot be detained for more than 20 days.

Pennsylvania Gov. Tom Wolf and other state officials have similarly sought to repurpose the building without sacrificing the jobs of those in the community.

Among the ideas suggested by Wolf are turning the center into a mental health facility for convicted criminals, making it a space for adolescents with substance abuse and mental health conditions, or using it to develop agricultural technology.

“It’s essential to remember the people being held in the center are not criminals,” DePasquale said. “Families seeking to enter the country through legal means should not be imprisoned while they await the outcome of their immigration hearings.”