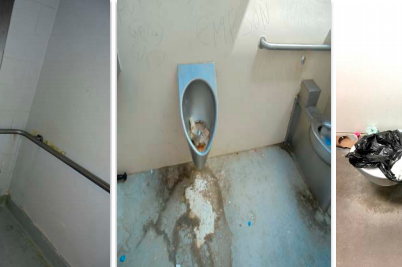 The Office of Inspector General from the U.S. Department of Homeland Security made unannounced visits to four facilities in 2018 — Essex; Adelanto in California; LaSalle in Louisiana; and Aurora in Colorado — to inspect conditions and review safety standards. The newly-released report shows that all four facilities violated ICE standards, however the conditions at Essex and Adelanto facilities warranted immediate action.

In Essex, the report found that food handling was so "substandard" that facility leadership had the kitchen manager replaced immediately during the inspection.

"At Essex, open packages of raw chicken leaked blood all over refrigeration units ... lunch meat was slimy, foul smelling and appeared to be spoiled; and moldy bread was stored in the refrigerator," the report found.

Mold permeated the bathrooms at Essex growing on the ceilings, vents, mirrors, and shower stalls. Toilets were unusable. Inspectors also found that upon intake, detainees were given a bag with one bar of soap, one comb, one stick of deodorant, and one toothbrush, and then were never given any additional toiletries. Clothes were often three or four times too large for detainees. At the time of inspection, no sizes besides 3x or 4x were available and no boxer shorts were available.

The Office of Inspector General found that at an Essex County detention facility that open packages of raw chicken leaked blood all over refrigeration units, lunch meat was spoiled, and moldy bread was stored in the refrigerator, as shown above.

Administrative and disciplinary segregation also was a major issue at all four facilities.

In New Jersey, detainees were strip searched when they entered either a disciplinary or administrative segregation, with no justification. Detainees in disciplinary segregation only were given one hour per day outside their cells for showering, using the phone to speak with an attorney, and recreation time.

In addition, the facility doesn't provide outdoor recreation areas — these areas are located within housing units. The office reported that proximity to green space reduces stress, depressive symptoms, and interpersonal violence. No fresh air or direct sunlight may result in a lower quality of life and increased idle time, the report said.

After the visit, ICE responded in New Jersey by training staff on food handling, made improvements to its segregation practices, revised recreation schedules, and added additional recreation time.

By September 2019, ICE said all corrective actions will have been completed.