In South Jersey, cranberries are one sweet cash crop

More than 32,000 tons of the holiday favorite was harvested last year in the state. The Haines family operation is the biggest, by far 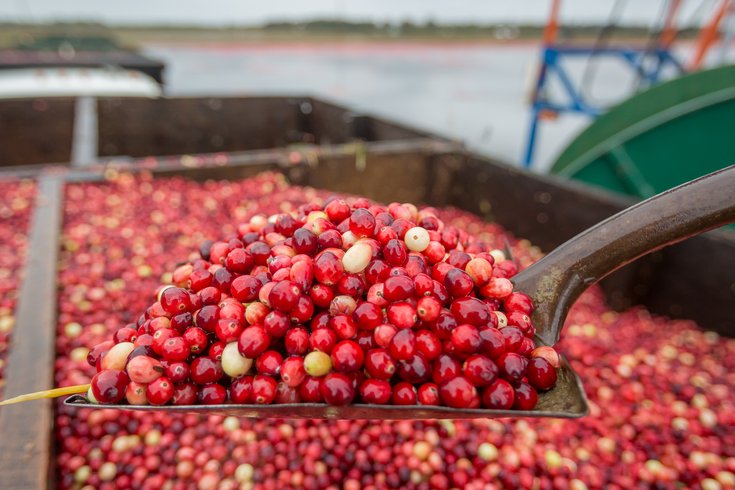 Fresh cranberries come from the bogs at the Pine Island Cranberry Company in Burlington County, the largest operation in the state. The Haines family has been growing cranberries at Hogwallow for 125 years.

Their cultivation rests with just a handful of farmers – a few more than 20 – in state. But the crop is huge. And valuable. 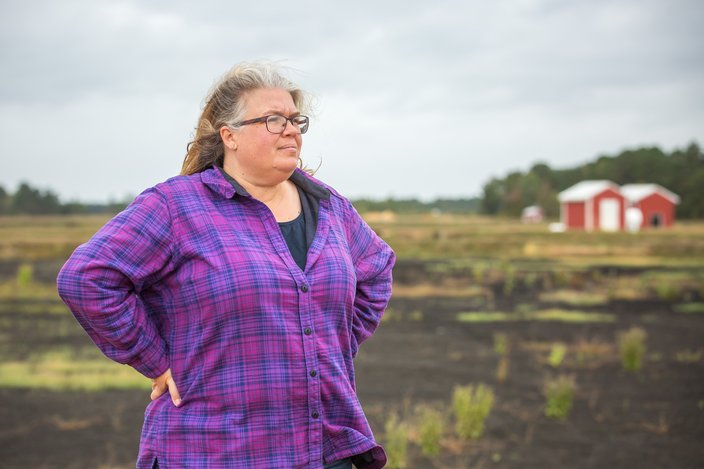 Stefanie Haines, a sixth-generation member of the Haines family to work on the Hogwallow farm, handles social media duties for the family enterprise.

PHOTOS: Here's how cranberries get from bog to Thanksgiving table

By far, the largest operation in the state is the Haines family's Pine Island Cranberry Company, with 1,400 acres of cranberry bogs in Hogwallow, near Chatsworth in Burlington County, protected by the surrounding forested watershed.

Hogwallow is the place where writer John McPhee centered his groundbreaking book, "The Pine Barrens." The tumbledown shack and rusted-out car of raconteur Fred Brown, a primary character in the book, sits on the Haines property.

PhillyVoice visited the farm last week and spent a day with Stephanie Haines, a fifth-generation cranberry grower whose family has grown cranberries for more than 125 years.

While not open to the public, the sprawling but isolated farm will be easy to see from the two lanes of Rt. 563 this weekend as thousands make their way to the 34th Annual Cranberry Festival in Chatsworth on October 21 and 22.

In fact, the Pilgrims showed early English settlers how to harvest and use the so-called “super fruits” in 1620 in Massachusetts, where the soil and topography are similar.

Originally called “crane berries” because of their small birdlike blossoms, they soon became known as cranberries.

Cultivation, as opposed to harvesting wild cranberries, did not begin until around the 1820s. But commercial production took off after 1870 when a New Jersey grower, J.J. White, literally wrote the book, “Cranberry Cultivation.”

Today, Wisconsin and Massachusetts are the leading producers, followed by New Jersey. 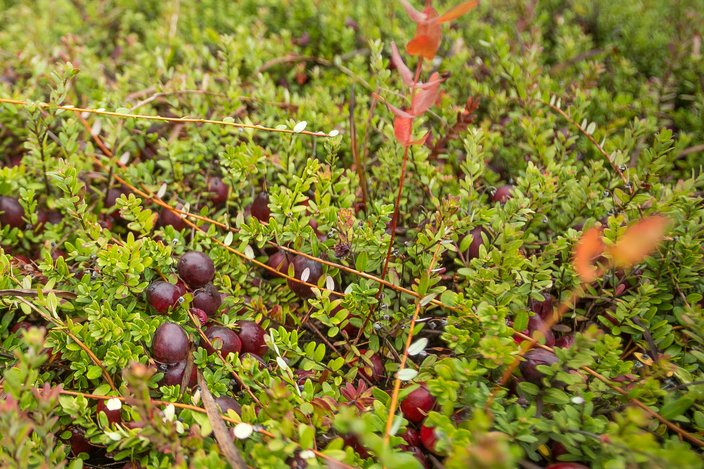 The ripe cranberries are barely visible below the small green leaves on the vines. From afar, ripe fields appear green.

Because cranberry growth and cultivation needs a steady and protected water supply, the farm’s entire acreage, most of it forested, is about 14,000 acres with water from wells tapping the underground aquifer as well as flows from the Wading and Oswego rivers.

The company, led by Stefanie Haines’ dad, Bill Haines Jr., employs about 27 full-time workers; most live in rented homes scattered around the property along Route 563.

About two dozen more seasonal workers are added in the fall, from the time the berries color up with the advent of cooler nights, until the last fruit is shipped in November to the Ocean Spray receiving plant just a few miles away. Hands work seven days a week in season.

Weather, especially the cooler temperatures, dictates harvesting schedules as a chill is needed to ripen berries to the deep red color that earns a premium from Ocean Spray, a grower cooperative begun in 1930.

“We call it chasing the color,” said Haines, who handles social media sites for the company. “This year it is up and down,” she said of the unseasonable temperatures.

About 20 New Jersey farmers belong to the co-op, which markets cranberries, today largely in the form of blended juice and fruit products, including cranberry sauce.

Just a few small Jersey cranberry operations do not belong to the co-op; those farms dry pick the berries for the fresh fruit market. Bagged cranberries sold in New Jersey under the Ocean Spray label come from co-op members in other states.

Harvesting began the third week of September at Pine Island with their early varieties. Just down the road, Lee Brothers, another generations-deep grower, are just beginning to bring in the crop. 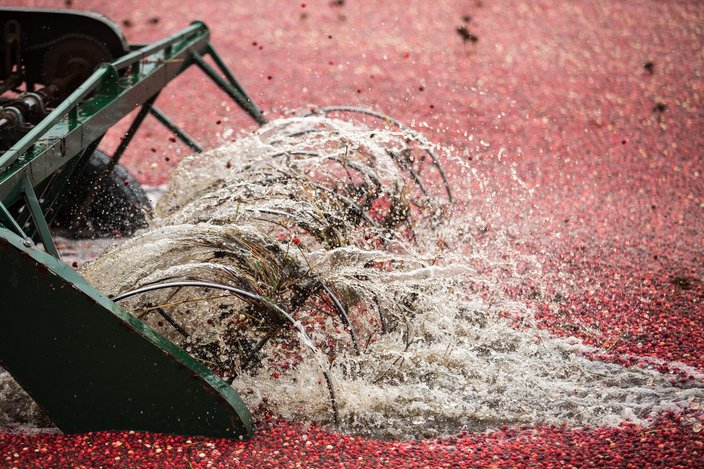 A “knocker” is used to shake ripened cranberries from the submerged vines. This process causes the hollow berries to float to the water's surface where they can be collected.

While the iconic berries of the holiday table get the most attention in the fall, cranberry farming is year-round work.

Man-made bogs, surrounded by a web of sand and soil berms which serve as service roads and impoundments, must be maintained and graded.

The trenches within, fed by a circulatory system of fresh water from on-site reservoirs, must also be maintained, old wooden gates replaced, sluiceways beneath the berms fitted with more durable PVC piping.

Bogs, while meant to be sandy and mucky like the natural bogs they replicate, are not submerged during the growing season.

The flooding happens first at harvest time, allowing the buoyant berries to float up and get captured after getting knocked off their vines. Bogs are again flooded before the heart of winter, protecting the vines from frost damage.

The bane of the bogs are the wintering tundra swans, protected birds that eat a weed known as red root, which grows alongside cranberries. They tear the weed out by its roots, creating divots in the bog that can trip up harvesting workers and dislodge berry vines. The Haines do their best to shoo them away.

Waterfowl and raptors flock to bogs, most notably bald eagles. The Haines are working to restore extirpated quail to bordering woodlands with good forestry management. They see themselves as stewards of the land – and a way of life. 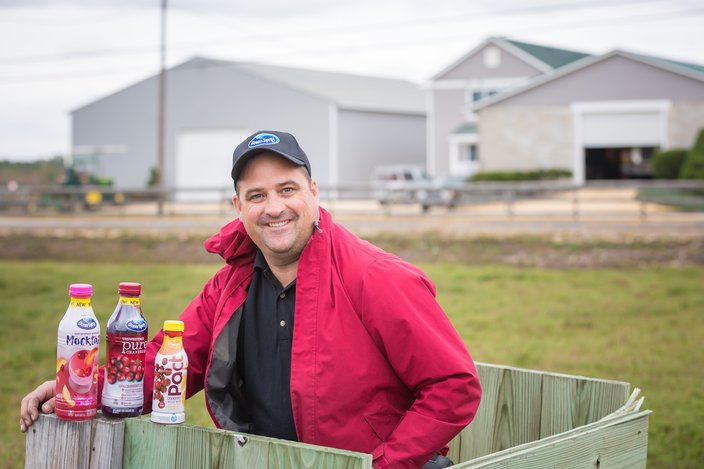 Bogs are restored on a rotating basis every few years, explained Haines, with a layer of sand applied which acts almost like a fertilizer, setting off new growth and a heavier yield. But first the bogs are burned and scraped, eliminating any chance of old, diseased vines harming new plantings.

Weeds are shorn from the banks of berms in early spring and kept close the rest of the year. That’s to keep the bees in 200 rented hives delivered each spring focused on fertilizing cranberries as they feed, said Haines.

Eight varieties of berries are cultivated at Hogwallow to assure a succession of fruit peaking during picking season, explained Haines.

She’s kind of partial to one named Haines, in remembrance of her late grandfather, Bill Haines Sr.

His home, paneled inside with fragrant Atlantic white cedar harvested on the property, sits at the center of the farm, befitting a farm shaped by generations of Haineses.