The longtime executive helped establish the company's charitable arm, a digital health platform and an effort to address health disparities 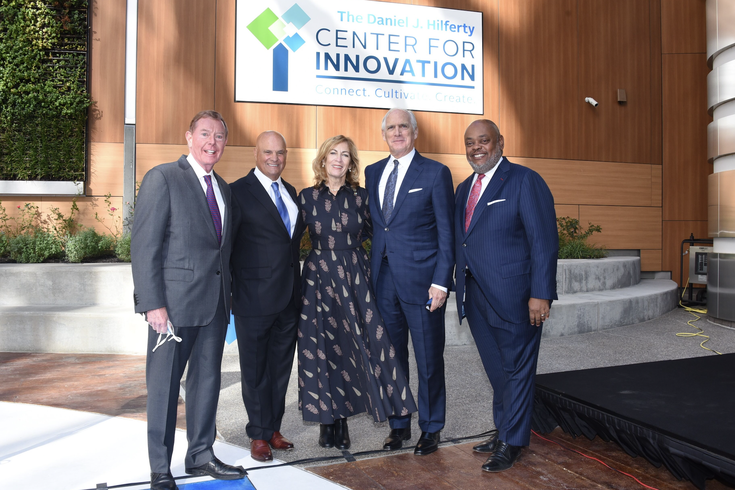 Independence Blue Cross has dedicated its Center for Innovation in honor of former CEO Daniel J. Hilferty, whose leadership at the helm of the insurance company led to significant growth and new ventures.

The 30,000-square-foot facility opened in 2019 and occupies two floors of the company's headquarters at 1901 Market St. The first floor serves as a place for brainstorming, planning sessions and events that focus on IBX's work with external partners including customers, health care professionals and community leaders. The second floor is a hub for employees to cultivate creativity and teamwork.

It is now known as the Daniel J. Hilferty Center for Innovation.

Hilferty retired at the end of last year after 10 years as CEO. He previously had served as president of Independence's Health Markets. He also had led Independence Health Group's Medicaid managed care subsidiary, AmeriHealth Caritas, for 13 years.

"Innovation is the lifeblood of a thriving company and community," Hilferty said. "The Center for Innovation represents a core tenet of what has made Independence a leader in health care nationally and corporate citizenship regionally for more than 80 years. I am honored to have my name associated with a space that I hope will inspire new ideas and positive change for decades to come."

IBX boosted its health care revenue to $27 billion during Hilftery's tenure. The largest insurer in the Philadelphia region, the company now has operations in 27 states and 8 million members.

Among Hilferty's innovation achievements are the creation of Quil, a digital health platform established through a joint venture with Comcast, and the launch of the annual B.PHL Innovation Fest. Hilferty also oversaw the development of Keystone Connection to Wellness, an initiative with Project HOME and AmeriHealth Caritas to address health disparities in North Philadelphia, and CivicaRx, a nonprofit created to address medication shortages and high prices.

"Our success will depend on cultivating and sustaining an organizational culture that values and promotes innovation," CEO Gregory E. Deavens said. "Fortunately, I believe that we’re ready to realize this vision. And we owe a great debt to Dan Hilferty for helping us be ready for the opportunities that lie ahead. Our innovation activities will continue to bear witness to his leadership."

The dedication of the Center for Innovation in Hilferty's name was recognized during a socially distanced event earlier in November.