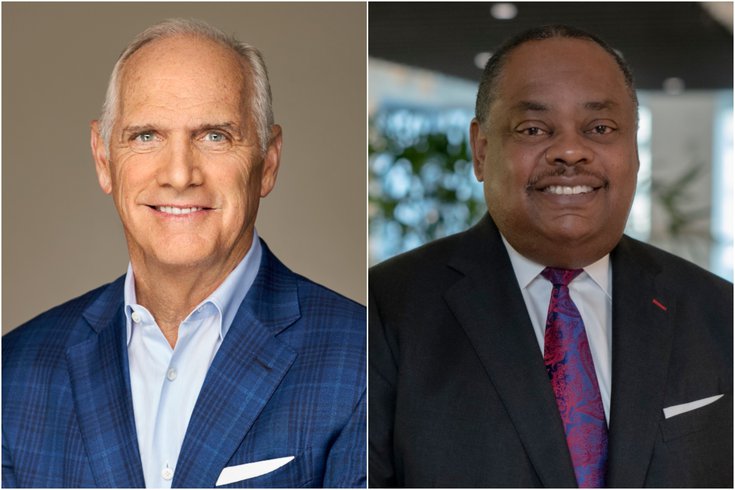 Daniel J. Hilferty, left, is retiring as chief executive officer of Independence Blue Cross at the end of the year. Chief Financial Officer Gregory E. Deavens will replace him.

Daniel J. Hilferty will step down as president and chief executive officer of Independence Health Group at the end of the year, ending a 10-year tenure that saw the health insurer nearly triple in size.

Hilftery oversaw Independence Blue Cross amid the rollout of the Affordable Care Act. He also was instrumental in expanding the coverage of AmeriHealth Caritas, the company's Medicaid managed care subsidiary.

"Over the last 10 years, I have had the honor to work with a team of outstanding executives and employees to make Independence and its subsidiaries into the national health care leader it is today," Hilferty said in a statement. "It has been an incredible privilege to serve our millions of members, our customers and the community."

Independence increased its health care revenue to $27 billion under Hilftery's watch. The company, the largest insurer in the Philadelphia region, now has operations in 27 states and 8 million members.

He also has been actively involved in the Philadelphia community, raising funds for the 2015 papal visit and the 2016 Democratic National Convention. He currently serves as the chairperson of the Board of Directors of the Chamber of Commerce for Greater Philadelphia.

Deavens, an executive vice president, is responsible for the company's financial functions and plays a prominent role in strategic planning.

He oversaw Independence’s purchase of its corporate headquarters building and directed the design and construction of the Independence Center for Innovation. He also serves as a member of the board for Independence subsidiaries AmeriHealth Caritas and Tandigm Health.

"Greg is an exceptional leader. He has the business acumen, energy, and vision needed to take the company forward," Hilferty said. "He is well respected throughout the company, business leadership circles, the health insurance industry and the Philadelphia community. Greg is the right person to lead the company into the future."

Deavens served as a senior vice president and corporate controller for Massachusetts Mutual Life Insurance Company from 2006 to 2016. He also has held leadership roles with New York Life, Cigna and GE Capital.

"I look forward to working with the tremendous Independence team, continuing our legacy of enabling access to affordable quality healthcare, driving innovation and promoting diversity and inclusion," Deavens said. "At the same time, we will redouble our efforts to serve members and eradicate racial inequities that exist in the delivery of health care and other aspects of our society."

Deavens was named chairman of the board of directors for Hartford Healthcare in July and serves on the boards of the Executive Leadership Council and the African American Museum in Philadelphia.