Sew your own sail at the Independence Seaport Museum this spring 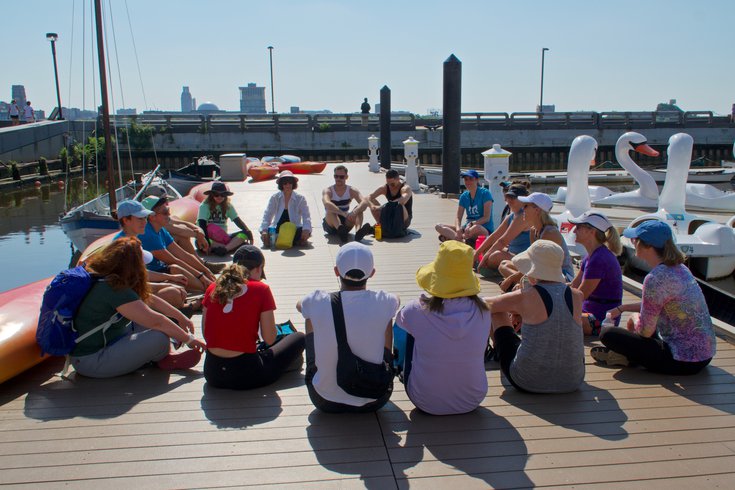 The Independence Seaport Museum is showcasing each section of its sprawling campus this April with interactive exhibits meant for visitors of all ages.

As part of the museum's "Spring Break Series," visitors can participate in five maritime history programs that feature hands-on activities, tours and rarely displayed collections acquired by the museum in recent years.

RELATED: The Easter Promenade returns to South Street after a pandemic hiatus

Visitors can learn about the history of pirates on the Delaware River. "Patriots and Pirates" is a historical documentation of the Algiers' pirates, who began kidnapping sailors and holding them for ransom following the Revolutionary War, when the newly-formed United States temporarily disbanded its Navy.

Visitors can learn to tie nautical knots on board the Cruiser Olympia, one of two Naval warships retired to the Independence Seaport Museum. Olympia was active during the Spanish-American War, and is now the oldest floating steel warship in the world.

Though "Patriots and Pirates" and the Cruiser Olympia are popular exhibits, curators have acquired a some rare artifacts, often unseen by visitors. The "Selections from the Collections" program allows guests to explore these unique items and take part in a guided sketch.

"Tides of Freedom: African Presence on the Delaware River," one of the museum's most popular exhibits, explores African American history, including the slave trade, emancipation and the abolitionist movement in Philadelphia.

The exhibit particularly focuses on James Forten, an abolitionist and wealthy businessman in Philadelphia, who owned a sail-making business along Penn's Landing in the early 1800s. As part of a special program, visitors can learn how to sew their own sails and make their own small boats.

To conclude the series, visitors are invited to the Citizen Science Lab, where museum staff will conduct experiments related to the Delaware River, and discuss the importance of its preservation.

Visitors also are invited to explore "River Alive," an exhibit that examines the relevance and importance of the Delaware River on the community that surrounds it. About 5% of the U.S. population gets its drinking water from the Delaware. Also, the 2022 Ecotopian Toolkit Project, a new exhibit made in partnership with The Penn Program in Environmental Humanities, discusses efforts and solutions for water justice.

The Independence Seaport Museum is partnering with the Ukrainian American Relief Committee from April 9-24 for a donation drive, with supplies to be shipped directly to people experiencing the humanitarian crisis in Ukraine. A full list of recommended items are available, and drop-offs will be available daily from 10 a.m. to 5 p.m.

People who donate will receive a $2 discount on general admission tickets, which cover self-guided tours of the museum's exhibits, including the Cruiser Olympia, and "Spring Break Series" programs. Guided tours of the ship and tours of the USS Becuna are considered add-ons.

Admission is $18 for adults, and $14 for children ages 3-17, seniors, college students and military members.