Infrequently Asked Questions: What's it like to be Santa Claus? 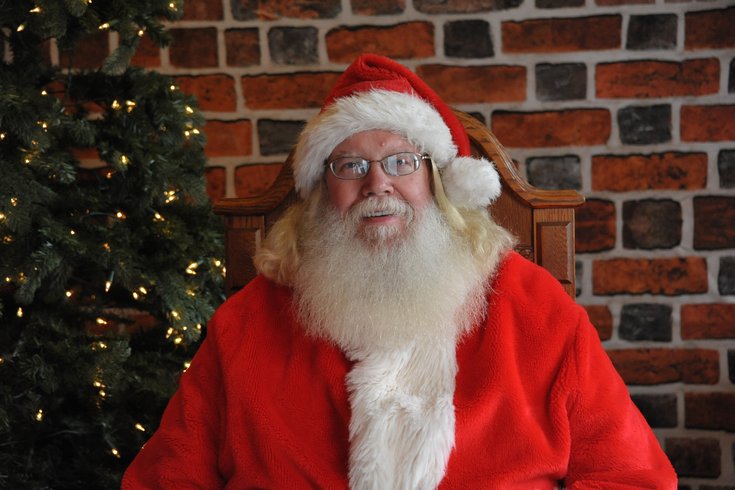 Being Santa is no easy gig.

Cheery as he may be, it's surely no cakewalk to lug children on your lap for eight-hour shifts while putting on the biggest smile your muscles can muster -- regardless of whatever misery you've felt that day. But what's the experience really like, from the perspective of the man behind the beard?

Curious, we reached out to Mayfair-native Ed Long, who's been a Santa in the city for 15 years. When he's not stationed at the Christmas Village on Fridays and Saturdays from noon to 8 p.m., or Sundays from noon to 7 p.m., you can catch him flying through the area for private home visits on Christmas Eve.

For starters, what’s the rundown of your Santa-ly duties? What do you do on the regular?

When I’m at the Christmas Village, Santa lets all the little boys and girls sit on his lap and tell me what they want and I check the naughty and nice list and see how they’ve been doing throughout the year.

Is there any kind of training involved for being a Santa at the Christmas Village? A course, in general jolly-ness?

I actually completed Santa School. I completed a two-day course. It's eight hours a day and they teach you what to do and not to do when you’re a Santa. They teach you how to answer certain questions that are tough to answer; you can’t promise everything when you can’t – if you can’t fulfill the promise yourself, and it’s something out of the ordinary, you can’t promise it to a child. "Grandma and Grandpa can’t be here, can you bring ‘em back?" You get some hard ones. "Mom and Dad don’t live together [any] more." How do I fix that? And you have to reassure them that it’s not their fault, and Mom and Dad still love one another and they just don’t get along well enough to live together, but they still love you. You have to be quick-thinking, because it’s off-the-wall all the time. You don’t say, "Oh, let me think about this." Kids want an answer and they want it fast. Because if you don’t answer quickly enough, they know you’re not telling the truth.

Do you need to maintain a certain weight to do this?

No, no. I’m a big guy anyway – I’m 280 or 290 [pounds], so there’s a lot of cushion for them. And some of those little guys, they don’t believe you're Santa, and I’m a full-bearded guy. I have white hair, kind of yellowish because I’m a young Santa ... The top’s white but the bottom is a little blonde yet, but it’s growing out. They ask, "How come you have yellow hair?" And I say, "It froze on the sled on the way down here." [Laughs]

If you can’t fulfill the promise yourself, and it’s something out of the ordinary, you can’t promise it to a child. "Grandma and Grandpa can’t be here, can you bring ‘em back?" You get some hard ones.

Does the suit get washed a lot? That has to be a pain to clean.

Actually, the suit is dry cleaned, I get it done once before I start. But it depends on what I’m doing. At Love Park, the kids are all dressed up in clean clothes and I might, the second week of December, have it dry cleaned again. The only risk you take with that is if something happens to the suit while it’s being cleaned. I do have a backup suit, but it’s not quite as nice as my main suit.

Do you ever worry about getting sick? I can’t imagine how many kids sit on your lap with a runny nose and a cold.

I get sneezed on on a regular basis. I have hand sanitizer with me. And when Santa’s not in the sled, he works in the medical field so he’s around sick people all the time. You build up a little bit of an immunity to it. If I get sick we’re in trouble, because you can’t be handling sick children when you’re sick.

Is it ever hard to keep a smile on? When you have a bad day?

Nah, you can’t do that. When you put the suit on, everything that happened to you that day that was bad -- it gets thrown out the window. Anybody can buy the red suit, but not everybody can be a Santa. You have to have some of the rapport and I love children, I have two of my own – no grandchildren yet, they’re working on that – but you can never show anger or dismay when you’re Santa or even look like Santa. And I look like Santa 24/7 throughout the year. I do not shave the beard, I keep my hair all year -- I trim the beard and cut it back, but I have my full beard all year long.

What is the most heartwarming moment you’ve ever had with a kid?

When I first started, I was working at a Christmas tree stand and a little girl came in with her mom. She walked up to me and said, "Can I see you Santa?" And she was looking at me, and I could tell the little girl was blind. So I say, "Sure you can." She says, "Bend over so I can feel your face." So she feels my face, the girl is maybe 6, a little tiny girl, cute and dressed in a beautiful red dress and her mom and dad are there. They came to pick out a Christmas tree.

So, she felt my face and she went and said, "Thank you Santa." And I gave her a candy cane and she said, "I’ll talk to you when I get back." So she walked into the trees with her mom and her dad. And 15 minutes later, she comes walking out by herself. "Where are your mom and dad?" I said. And she says, "They’re in there looking at the trees." And I asked how she found me and she said, "I heard your bell. Just because I can’t see, doesn't mean I can't hear great." And it brought tears to my eyes. She spent a good half-hour hanging with me and handing out candy canes, and other kids came up and her mom and dad said it was the greatest experience she’d ever had because in the mall you don’t have time for that.

At the mall, it’s "Smile and take a picture." That’s the thing about the Christmas Village: I can be Santa down there. I control the speed of the line, not the guy collecting the cash. And that’s how it should be. We’ve had some autistic children come down there, and sometimes it can take an hour before they calm down and want to sit on my lap. And people in line understand what we’re doing, so if I can get a child on my lap, then yes, we’ll jump ‘em right in line and people are very understanding because they watch the whole process of me giving them a high-five and calming ‘em down and trying to get them close to me ...

And you're a young Santa?

Do you believe in Santa?

Of course, I do. Yeah! I’ve always believed in Santa and then I became one. When I have other people believe I’m Santa it makes it easier for me to believe in Santa.