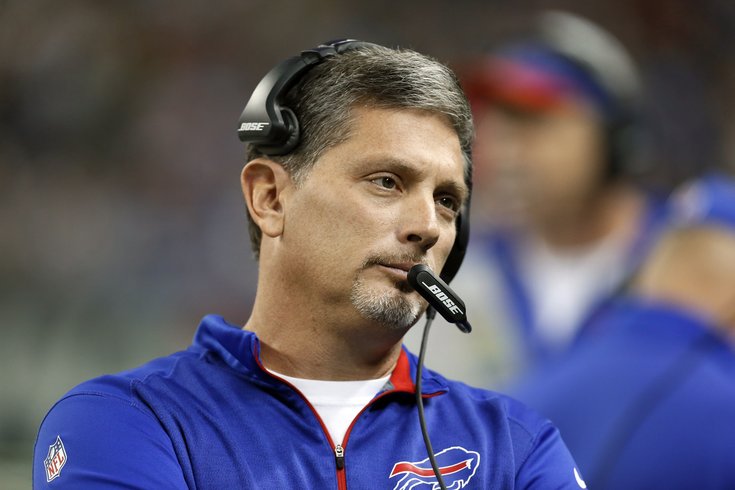 Jim Schwartz led the Bills to a top five finish defensively in 2014, and they let him go.

The Eagles' head coaching search is over, as the Eagles hired Chiefs offensive coordinator Doug Pederson to run the show, in case you've been living in a cave. And so begins the search for Pederson's staff.

Warning -- Schwartz runs the wide nine. Eagles fans will likely be terrified of the phrase "wide nine" from the Jim Washburn era in Philly, but Schwartz has had success with it throughout his career, and he uses it as a tool, not as an every-down alignment.

Let's look at his defensive resume as a defensive coordinator and head coach:

• Most Eagles fans will remember the wide nine as a defense that was very susceptible to the run. As you can see above, there isn't much variance between the run and pass. In fact, Schwartz's defenses were very good against the run his first three years as a defensive coordinator, not so good against the pass.

• Schwartz's first six years as a defensive coordinator were not impressive. In 2006, his defense finished dead last in the NFL in overall yards and 31st in points allowed.

• In 2007, the Titans defense really started to put everything together. They followed up a good 2007 with a 9-0 start (with a 13-3 finish) in 2008, before getting bounced in the playoffs in the divisional round. On the strength of those two seasons, Schwartz landed the Lions head coaching job. The Titans finished 28th in overall defense the year after Schwartz left.

• Schwartz's rookie season as a head coach in Detroit immediately followed the 2008 Lions team that went 0-16. They finished dead last in overall yards, passing yards, and points allowed with an awful roster in 2009. The defense mostly got better throughout Schwartz's tenure with the Lions, but never cracked the top 10.

• Schwartz got canned after the 2013 season, and he went back to focusing on defense in Buffalo under Doug Marrone. The defense was the clear strength of that team, as you can see from the numbers above. In addition to finishing fourth in yards allowed, the Bills led the NFL with 52 sacks.

• In his last three stints as a defensive coordinator, Schwartz has finishes of fifth, seventh, and ninth. That's pretty impressive.

• In 2015, Schwartz was an NFL officiating consultant, offering "a coaching viewpoint on decisions made by the league's officiating department."

Surrounding a rookie head coach in Doug Pederson with top assistants with a lot of experience makes sense. Schwartz has nine seasons of experience as a defensive coordinator, five as a head coach, and four as a position coach.