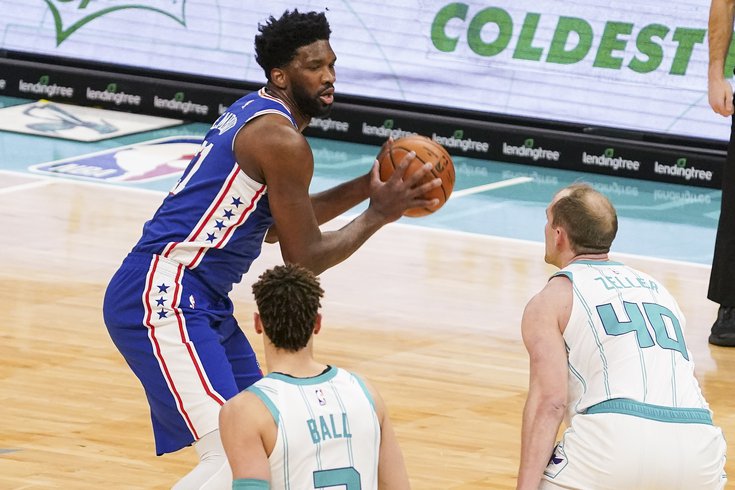 Joel Embiid continues to play day in and day out like an NBA MVP.

The Sixers took their foot off the gas after a dominant first half in Charlotte, but they would ultimately put the Hornets away in a 118-111 win. Joel Embiid was the man in charge once again, dropping 34 points with 11 rebounds in the victory.

• There have been a lot of good quarters for Joel Embiid this season, with the big guy in the midst of a potential MVP campaign. I'm not sure he has had a better two-way effort all year than he offered in the first quarter, in an effort that basically knocked out the Hornets before the game could even get started.

Keeping in mind that Embiid had as many points (13) as Charlotte's entire team in the first quarter, it was his defense that stole the show on Wednesday night, not his offense. The Hornets could do absolutely nothing in the painted area with Embiid in the game, even on possessions where they were able to beat Philly's perimeter defense and force Embiid into scramble mode.

When Charlotte attempted shots at the rim, Embiid's timing was impeccable, altering layup attempts into wild heaves off of the backboard. When Charlotte's guards tried to dump off to Cody Zeller, Embiid was light on his feet and back in position, either deflecting the pass or preventing a shot after the ball got to Charlotte's starting center. Poor Zeller, honestly — Embiid absolutely tortured him on Wednesday night, not letting the vet establish his footing for even a split second.

I think some people locally might underrate Embiid as the defensive anchor of this team because he has less of the highlight plays than, say, Ben Simmons or even Matisse Thybulle. But he is the driving force behind their defensive success, a guy who stonewalls teams at the rim so often that it deters them from trying to challenge him in the first place.

Then there was the gallery of highlight moves Embiid came up with on offense. A sweeping hook in traffic, a teardrop as he split a double team, good passes being sprayed all over the court, and the play of the half for Philly, with their center going coast-to-coast by himself and dunking on Zeller. This isn't normal:

The big fella is gonna to take care of this one.@JoelEmbiid x #NBAAllStar pic.twitter.com/KZV9M32Pz9

His three-point shooting will almost certainly take a dip at some point, but even if it does, Embiid being an average three-point shooter on decent volume makes him basically unguardable. If he is somehow able to sustain the elite numbers he's putting up right now? Good effing luck.

• Ben Simmons has not suddenly turned into an attack-minded player on offense, but he is taking advantage of more situations that he should be expected to win from over the last couple of weeks. The jump hook has been an area of particular success lately — instead of always looking to pass out of the post, we're seeing Simmons drop the shoulder into somebody and make right-handed hooks with ease.

With his size and athleticism, Simmons is regularly going to have matchups he can and should win on the block, and this is a realistic path to doing so. Seeing him take these shots more regularly is a good sign.

Outside of that, I thought Simmons' most important stretch of the game toward the end of the third quarter, with the Hornets pulling back into the game and Embiid going to the bench to get some rest. With some pressure defense at the top of the arc and a commitment to get to the rim, Simmons helped the Sixers get a few quick baskets and extend the lead once again, effectively keeping the game out of reach.

• Tobias Harris is slowly settling into a role as the guy who helps the Sixers kill off and finish games in the fourth quarter, and he's doing that with a headstart on the rest of the starters. Rivers is increasingly leaning on him to carry their bench unit to open the fourth quarter, and he has responded to the task, often carrying that momentum deep into the quarter as winning time arrives.

One combination I particularly liked, to no one's surprise, is the Harris-Embiid duo. With Embiid clearing out space and leveling several Hornets players on screen, Harris was able to turn the corner and finish at the rim, an area where he has been spotty at times but certainly much better this season. There was even a nice lefty finish through contact in the third quarter, one of the best plays at the rim we've seen from Harris this season.

• Any game where Danny Green makes open shots will probably leave fans happy, but there's so much more he does for the team. His defense was on point (partially because the Hornets don't have a lot of quick-twitch guards to punish him) in both halfcourt and transition, with Green coming up with a spectacular block in transition to save a bucket in the first half. He has a rep as a culture-building player, and when his legs are cooperating, he definitely looks like one.

And yeah, of course the made shots help. He bailed the Sixers out of 2-or-3 possessions on Wednesday with absolutely insane floaters on the move, which I wouldn't expect much more of but appreciate all the same.

• One guy who has taken a notable step forward on defense this season? Furkan Korkmaz, albeit in a limited number of games. Time and protein shakes have done Korkmaz good, putting some bulk on his frame that helps him absorb more contact, but his fundamentals have given him a good base to work from on top of that. His footwork is better, his understanding of scheme is better, and he has always had the same determination to compete, he's just able to act on it more now.

There were several possessions on Wednesday where Korkmaz was on an island and did a great job to prevent penetration, beating would-be drivers to spots and forcing them into contested jumpers. We'll see if it holds against good teams.

• Thought this was one of the better Dwight Howard games we've seen recently, partially because it's the first time in a while I thought he actually got screwed by the officials. A tough whistle or two aside, Howard was everywhere on the glass and more disciplined on defense than he has been a lot of this season. Even at his advanced age, he can still punish opponents who have undersized frontlines on the offensive glass, a valuable source of points for Philly even with all the missed Howard free throws you have to sit through.

• Can I interest you in a discussion of the third quarter? I'm hearing no? That's too bad, because we have to talk about it anyway.

For the most part, I thought the third quarter was mostly about the old adage, "It's a make or miss league." The Sixers created the sort of shots you hope to get from three and missed them, while the Hornets made at least 3-or-4 threes that were well contested by Sixers defenders, defying the odds to pull back into the game. That's how the game goes sometimes.

On the other hand, the Sixers definitely could have stepped on the gas more than they did in the third quarter, committing to the glass and transition defense hard enough to put the game out of reach. They seemed to think the game was out of reach at that point, and while I don't necessarily blame them for thinking that way, it did force their starters to play longer (and harder) than they needed to in this game, which is a bummer at the beginning of a three games in four nights stretch.

• Seth Curry has come back to Earth a bit after a scorching start and a stint on the sidelines with COVID-19, but this was bad even compared to other recent performances. It was easy to excuse him not attempting a shot in the first half because the Sixers were absolutely rolling. They came to a screeching halt in the second half in part due to his inability to make anything.

It wasn't because the Hornets played particularly good defense, either. Curry was the beneficiary of extra attention being paid to Embiid in the painted area, but he bricked some absolutely wide-open looks from some of his money spots. Teams aren't going to start ignoring him because of a poor stretch — he's got an ironclad reputation and would burn teams pretty quickly — but they do need him to sort it out sooner than later.

• One negative for Embiid on Wednesday — his turnovers out of the post. He has done a much better job this season of not dribbling himself into trouble, but he was out of sync with his passes and mailed a couple out of bounds because of miscommunications with his teammates.

A small blemish during a dominant night, but a blemish all the same.

• The only negative in the first half was a scary moment for Shake Milton, whose leg appeared to buckle as he drove toward the basket early in the second quarter. Milton calmly made the ensuing free throws before taking a foul to get off of the floor, retreating to the locker room to be looked at by a Sixers staffer.

Good news: he was available to return before the second quarter had ended, and he took a seat on the bench as the Sixers closed out the half in style. Let's hope it looked worse than it is and doesn't feel sore tomorrow, because even with Milton underperforming from beyond the arc, he's a pivotal part of their bench.