Instant observations: Joel Embiid drops 41 and 20 in win over Pacers 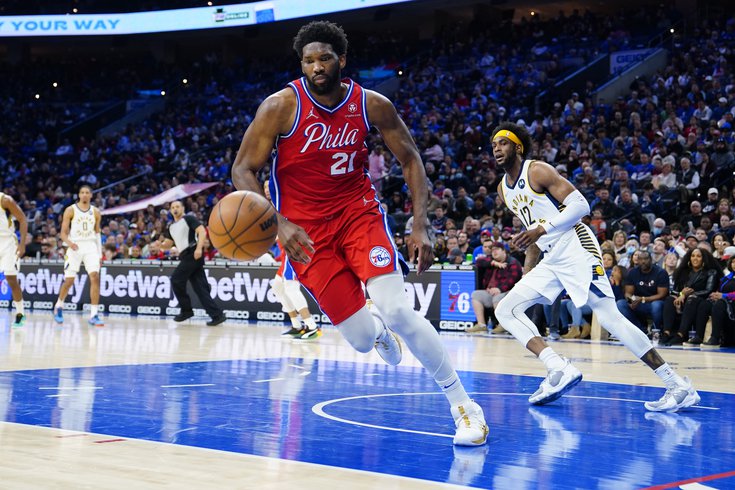 Joel Embiid has the NBA scoring title well within his sights with the season winding down.

Joel Embiid played what could be his final game of the regular season and delivered another masterpiece, pacing the Sixers to a 133-120 win with 41 points, 20 rebounds, and four assists against the Pacers.

• There are times each game where Joel Embiid uses his understanding of the rules and positioning of the opponent to put himself on the free-throw line. But as of late, his occasional gaming of the officials has overshadowed the constant trips he makes to the line as a result of his physical dominance, with Embiid overpowering teams and forcing them to take fouls.

That's exactly what he did in the early moments of Saturday's matinee, drawing shooting fouls on each of Philadelphia's first three possessions. There were no rip-through moves, no ugly flails, nothing but Embiid playing with power at the rim. When he wasn't getting designed post touches, he was bodying Indiana's smaller frontline on the offensive glass, either getting a clean putback attempt or getting smacked across the forearms for his trouble.

If they had used this game to simply force feed Embiid to let him gun for one last statement game, it wouldn't have shocked me to see Embiid go for an easy 50 points, insofar as 50 points can be easy. He was able to slide through or past Indiana defenders basically whenever he wanted, though he certainly wasn't at 100 percent intensity with the regular season in its dying days.

As it was, Embiid had just about everything working in this game, so they only needed to give him his usual steady diet of touches in order for him to go off. He blew through defenders as a roller, knocked down jumpers from the free-throw line, scored on drop-offs from Harden, pulled down second-chance opportunities, and did everything in his power to send people home with one more lasting memory from his MVP campaign.

This was not the most inspiring team performance in the world for the Sixers, and you wouldn't have expected one in the circumstances. And Embiid reminded everyone that they don't really need to get much out of everyone else if he plays at his highest level, at a tier above all but a few players in the entire league. With this (assumedly) final 40-10 game of the season, Embiid now sits alone as the single-season king of those games, passing Moses Malone and Russell Westbrook with 13 of those games in just one year.

If this is his final game of this season — there's a good chance the Sixers sit a bunch of regulars tomorrow night — it was a fitting capper on the best, most complete season he has ever had. Whether he wins the MVP award or not, Embiid turned in another special year, propping up his team and flashing important skill developments along the way. Should he sustain that level of play in the playoffs, they have a chance to hang with anybody, even with question marks all over the place.

• Danny Green looking more like Danny Green again is a great sign for the Sixers, so long as his body continues to hold up and he can stay in this run of form. Rivers gave him the chance to start a consecutive game instead of going back to Matisse Thybulle, perhaps because they might have to play a first-round series without Thybulle (we'll find out more about the decision later). Even when the shots aren't falling for Danny Green, and he got a few threes to go down in this one, having him in the corner is a much more dangerous proposition for opposing defenses, and he finally looks to have some of his quickness back, allowing him to make some plays in passing lanes and on the glass.

Green and Thybulle doesn't have to be an either/or proposition for the Sixers, obviously. If both guys end up being playable in the postseason, the Sixers can throw some lineups on the floor that have at least decent size and athleticism, putting some interesting combinations between the Harden and Embiid pillars.

• You could throw bits and pieces of Paul Reed's performance in every category of this recap. Picking up two fouls in his first two minutes of action is exactly the worry you have when you play a young big, and Reed managed that in a game against an opponent without much firepower to speak of. Fouling a lot is bad, and it's a bad thing basically all young bigs do.

On the other hand, Reed showed exactly why a lot of people want to see him play. He goes balls to the wall at basically all times, and he finds himself in a lot of favorable spots as a result. When there is an opportunity for a rebound, Reed is going to find a way to at least get near it, if not grab it outright. That is something they have been missing all season, and Reed's effort in transition going both ways was a sight to behold.

Aside from a couple of tip-ins on the offensive glass, Reed showed off a bit more on offense than we usually see out of him. He busted out a jump stop to score one basket in the first half, and he went off-the-dribble to get by first-round pick Isaiah Jackson for a slam early in the second quarter. In just six first-half minutes, Reed managed to come up with eight points, three rebounds, three steals, and the unfortunate four fouls.

If he can learn a bit of discretion, there is a helpful NBA player in there. The Sixers won his minutes outright in the first half even with some rotation changes and foul trouble junking things up, and Reed definitely made his presence felt.

(For those following the backup center race at home, Rivers said pregame that the guy getting minutes at that spot is going to depend on the matchup, with DeAndre Jordan still expected to play against teams with bigger centers. We'll see what actually ends up happening when push comes to shove.)

• James Harden had more pep in his step in this game, though his shooting numbers don't necessarily reflect that. After a game in Toronto where he struggled to get by basically anyone, Harden had a few moments where he attacked a closeout with speed or got by a defender using his first step. That never used to be headline news, but we haven't seen much of that in recent weeks, so seeing it at all feels like a huge bonus whenever it happens.

One positive development in this one — Harden has shown frustration with teammates who don't take wide-open threes after he has created them for guys on the floor, which is understandable. He's not always a credible yeller there, though, because he passes up a fair amount of wide-open looks coming his way on the swing. And to his credit, Harden let a few catch-and-shoot attempts go in the second half, even making a couple of them. A change in approach might make all the difference in the world, allowing Harden to build a rhythm without him needing to make difficult stepback threes to do so.

Broadly speaking, teams are still guarding Harden and Harden-related actions as if he's the guy he was several years ago, and he is still making life easier on everybody else because of that. His passing value is astronomical. Maybe the week off between the end of the season and playoffs helps him reclaim some life in his legs, and maybe he will settle into the multi-faceted role they need him in to be at their best. Whatever version of Harden they get in the playoffs, at least they will know that his passing brilliance is going to show up.

• One of these teams is a group of young guys looking to leave an impression with their play in the final days of the season. The other is a team that hopes to contend for a title and hasn't played inspired defense as of late. It turns out that's a pretty ugly combination, and whenever the Pacers had a chance to get out and attack the Sixers, they met little resistance from Philadelphia.

I'm inclined to give them a bit of leniency here, given that they have to close the season on a back-to-back and mostly want to get to the end of the season healthy. But giving up 36 points in a quarter to this version of the Pacers is borderline impossible. They are going to get smoked in the playoffs if this doesn't improve.

• Tobias Harris just absolutely killed the Pacers in the first half on Saturday afternoon. He offered shotmaking from all over the floor, helped bring the Pacers out of a zone look they threw at the Sixers sporadically, and he mauled Indiana in isolation, burrowing through some defenders who didn't have the strength to deal with him.

Then the second half came, and he was basically a non-entity. That has happened in far too many games as of late, and if the Sixers could simply get two good halves out of Harris, they'd be floating to easy wins instead of gritting their teeth to beat undermanned opponents.

• If there's one thing that Embiid needs to scale back as we transition to the playoffs soon, it's his bouts of overdribbling. They need him to be able to use the handle to create separation and beat closeouts, but there have been a few too many times recently where he has a good look and ends up dribbling himself into trouble. Less is more, and I did think he observed that philosophy in transition, where he was quick to find Harden and allow him to get Philly moving on the break.

• A Pacers/Pistons back-to-back to close the season has to be the most juiceless ending imaginable to this season. At least the Pistons have an in-form Cade Cunningham to excite you with, I guess.

• Rick Carlisle should be charged with domestic terrorism for calling a timeout down 16 with a minute left in the game.