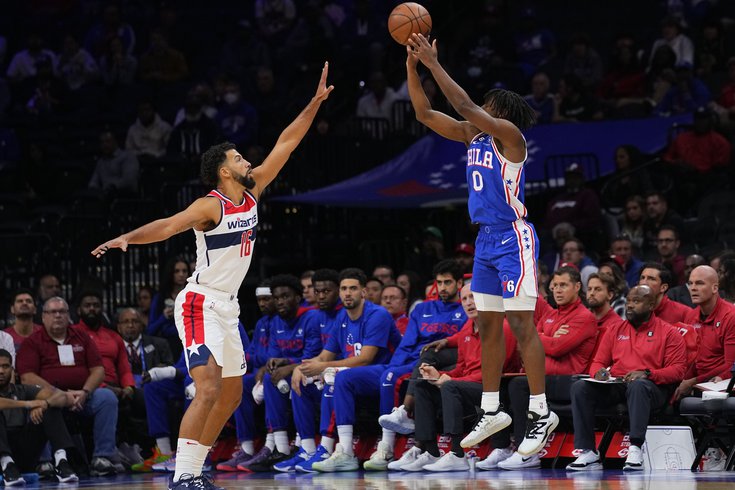 Tyrese Maxey continues to breakout this season as the Sixers play inconsistent basketball.

The Sixers' defense was horrific on Wednesday night, as a group down two important players suffered an uninspiring 121-111 to the Wizards.

Here's what I saw:

• Down a couple of their best players, responsibility for this game ultimately fell in the hands of the James Harden/Tyrese Maxey/Tobias Harris trio. The only one who truly pulled through for Philadelphia was the youngest man in the group, the two veterans ultimately struggling to put together complete games from start to finish.

In the middle of a lifeless game the Sixers trailed in at the half, Maxey came out of the locker room and went on an individual scoring barrage to pull the Sixers closer — this in spite of the fact that the Sixers could not get a stop. A wing three here, a tough finish off glass there, even a flash of Maxey going left, and suddenly he went from a fairly standard outing to pacing the Sixers all by himself.

Maxey seems to be at the point where he feels a little more comfortable in his position not just on this team but within the league hierarchy. There was more advocacy and griping toward the officials in this one than we normally see out of him, and I don't think he was off-base trying to get more calls. Young Maxey absorbed a lot of contact on Wednesday night, and the officials often asked him to simply play through it, but the trips he did make to the line ultimately helped keep the Sixers alive in a game they didn't play all that well in.

It's a bit scary how easy these 30-point outings are becoming for Maxey, or at least it should put some fear in opponents moving forward. His growing skill set gives him so many ways to hurt you, and a pedestrian game can turn into an incendiary performance if he sees even one shot go down. With any sort of defensive effort from the group, he would have done enough to power them through this one.

• This game felt like a great opportunity to get Paul Reed some time, with the Sixers in need of activity and athleticism after the news came out that De'Anthony Melton Melton would miss the game. As luck would have it, Reed got his first minutes of the game midway through the second quarter, and he made an immediate impact in a game that was starting to get away from Philadelphia. A tip-out to James Harden for a three and a dunk later, and it felt like Reed had sufficiently changed the momentum.

Reed would not see the floor in the second half. Can't say I agree with that choice.

• I don't think Doc Rivers had an ideal deck of cards for this game, given that Joel Embiid was out and Melton was a late scratch due to back stiffness. The latter has been a huge reason Philadelphia's small lineups have any chance to succeed, and you could tell the Sixers missed him on Wednesday night.

That said, a bunch of the lineups Rivers put on the floor didn't really have much chance of succeeding on paper. Sending a small group with little-to-no perimeter defense out there with Montrezl Harrell behind them is just asking to get punished. And Rivers followed that play by swapping in Tobias Harris for Harrell, not exactly stiffening up their defense in the paint.

(If you're not going to use Paul Reed in circumstances like those, in a game where the opponent's bigs are not true bigs, I don't really understand the point of having him on your roster. Reed eventually got into the game after PJ Tucker picked up his third first-half foul, but a lot of damage was done by that point.)

The guys who were on the floor, mind you, were left in some bad positions as a result of their scheme. Georges Niang has been better on defense this season, but having him involved on damn near every ball screen is a recipe for disaster, and the Wizards figured out fairly quickly that they could put the Sixers in trouble by involving him early and often.

Getting two consecutive games against a single opponent is a fun regular season test, as the Sixers found out when they got the better of the Raptors in their second Toronto meeting last week. The Wizards finding easy ways to exploit the Sixers was a bit concerning in this one, as was the insistence on playing lineups that appeared doomed to fail off the rip.

• Maxey's backcourt mate did not have a scorcher or a 17-assist game as he did in the previous Washington meeting, frequently relying on junkball tactics to sustain his offense throughout the game. Harden couldn't find the range on his stepbacks and ended up on the wrong end of the whistle a few times, but in the early stages of the game, he hung in and found ways to put points on the board, often using the midrange to get by while under duress.

To Harden's credit, he came alive in the final stages of this game after struggling to find the range in the middle quarters. After hitting a rare catch-and-shoot three out of a timeout midway through the fourth, Harden would knock down another triple down the stretch, pulling Philadelphia within a single possession for what felt like the 75th time of the second half.

Harris arguably "benefitted" the most from the pair of absences in the lineup in the sense that more opportunities came his way on offense. On a lot of nights this season, Harris has been a spot-up guy almost exclusively, and Wednesday's meeting with Washington gave him a chance to diversify. There were more reps with Harris operating in the mid-post and more chances for Harris to get the ball in transition, and he put pressure on the Wizards early in the game, including when he needed to play some bully ball on the glass.

The main problem for Harden and Harris was on the other side of the ball. Both got caught ball-watching or jogging away from plays, the Wizards cutting through space or outrunning the Sixers en route to too many easy points. The attentiveness just was not there, and they don't have the overall defensive talent (especially while shorthanded) to get away with going through the motions on that end.

• Shake Milton had an absolute nightmare of a first half, starting with when he got called for a travel despite getting hammered by a Wizards player around the rim. It didn't get much better from there, and it's a good reminder of why he's on the fringes of the rotation on a normal night.

• Can't say I would advise playing Tucker for nine consecutive minutes to open a game against the Wizards in early November. Just my two cents.

(Playing Tucker in general didn't look like the greatest idea on Wednesday, not that they had many options aside from him. Tucker looked stuck in the mud anytime he had to defend in space.)

• The calculus remains the same for Niang each and every night. If his shot is pure and his offensive contributions are there, you leave him out on the floor until things go south. The defensive issues aren't going to disappear, but you can forget about them for a while when he gets hot.

You couldn't forget about them in the first half, mostly because Niang was put in some rough situations in ball screens as a result of Philadelphia's small, defensively-challenged lineup. It didn't change a whole lot from there. He's a useful rotation guy and has frankly been one of their more valuable pieces off of the bench this season, but it was tough sledding for him in this one.

• Danuel House Jr. has yet to find his footing in a Sixers uniform, and with Philadelphia down a perimeter player on Wednesday night, it would have been a great time for him to step forward and start making a name for himself. To his credit, he began to find the shooting touch against the Wizards, knocking down a pair of threes and powering himself to the basket with a drive in the third quarter, but it was more of the same anonymous defense that he has offered all season up to this point.

He will get going at some point, but the calls to play other people will get louder as this fanbase grows impatient with his slow start. Even calling this a "slow start" is pretty generous.

• Montrezl Harrell continues to get minutes that are basically automatic and I can't say his play has earned that distinction. The finishing ability and his history of killing smaller guys on switches has not shown up yet.

• While we have a Sixers focus around these parts, it must be said that this game should basically be a burn-the-tape outing for both groups on defense. The Wizards were shooting 57 percent from the field with about five minutes left in the third quarter, and all they were able to do is create a three-point lead over the Sixers. Nobody guarded their man, nobody made smart rotations, even effort plays were in short supply unless your name was Paul Reed.

I suppose you could credit each offense for the work they were doing, but it's hard to get past the crappy defense.

• This game had the exact amount of juice you would have expected coming into it, which is exactly none.

• Paul Reed got called for a foul in the second quarter that ranks among the more ridiculous calls I've seen whistled this year. Bradley Beal rolled his ankle as the two men ran in transition, and it seemed the officials only called a foul on Reed because Beal hopped out of bounds in pain.

• Not exactly the best game for the Sixers on the health front, and that's without considering the two guys who missed the game. James Harden appeared to bang knees with a Wizards player before falling down in the first half, and he labored on the ground a bit before eventually popping back up and staying in the game.

The bigger concern, for now, is Matisse Thybulle, who was forced to take a trip to the locker room after his own spill early in the second half. We would not see Thybulle again after he checked out. Whether it's a real issue or just a momentary problem is something we'll learn later, but with Thybulle playing well in a reserve role lately, it would be a blow to their bench if he's compromised at all.