Invasive plant found in Pennsylvania could cause blistering, blindness 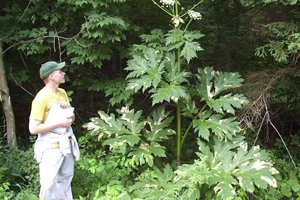 The giant hogweed plant has been reported in Maine, New York, Massachusetts, Michigan, Connecticut, Pennsylvania, North Carolina and parts of the Pacific Northwest.

With the official start of summer just days away, environmental experts in several states are warning of a noxious, invasive plant that can cause severe health complications for those who come into contact with its sap.

Recent reports out of New York, Virginia and Pennsylvania all record sightings of giant hogweed, a tall member of the carrot family whose clear sap creates a phototoxin when exposed to moisture and sunlight.

The New York Department of Environmental Conservation urgently instructs residents not to touch the plant, which can cause symptoms including severe skin and eye irritation, painful blistering, permanent scarring and blindness.

A Facebook post from Isle of Wight County in Virginia displays several photos of the rapid progression of blistering on the hand of someone affected by toxins from giant hogweed.

Giant hogweed plants can grow up to 14 feet tall, with hollow stems that have dark red and purple blotches. They have coarse white hairs and white flowers that form an umbrella-like cluster at the top.

While native to the Caucasus Mountain region between the Caspian and Black Seas, giant hogwood was introduced to the United States as an ornamental garden plant in the early 20th century. It tends to grow in areas with abundant light and moist soil, including along streams and rivers and in fields, forests, yards and roadsides.

Anyone who believes they have come into contact with a giant hogweed is advised to immediately wash the impacted area with soap and water and avoid direct sunlight for 48 hours.

Tips for identifying giant hogweed can be found here.