It feels like the Eagles should/will add a running back 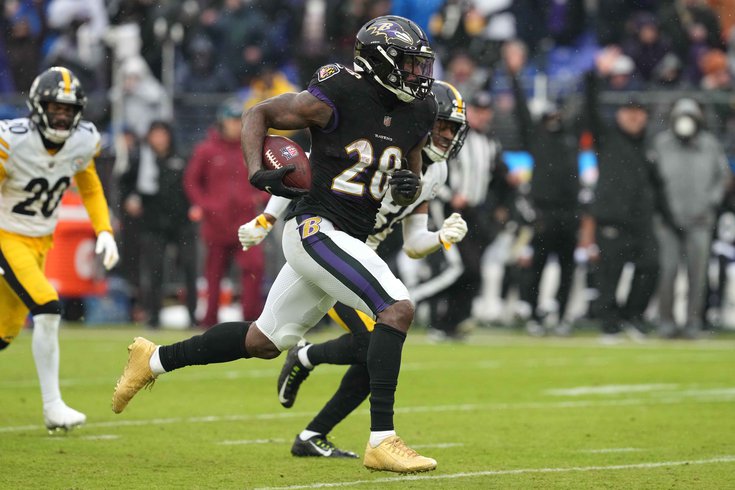 Earlier this week, when we last projected the Philadelphia Eagles' initial 53-man roster, there was only one position that felt incomplete.

That was at running back, where the team is currently only carrying five backs through training camp to begin with, and they still lack a big power back to handle the load like Jordan Howard has over the last few seasons whenever Miles Sanders has gone down.

Certainly there are other positions that the team could continue to look to upgrade, like at safety, should the right opportunity present itself, but running back feels like the one position where the Eagles could add a guy off the street and that player could realistically make the roster.

And so, here are three running backs who I think make sense for this team who are currently just kind of hanging out, waiting for a call.

This was supposed to be a shot at Elliott, but at the same time it made me think, "Hey maybe the Eagles should sign Latavius Murray." They're both big, plodding backs who are good around the goal line who will generally fall forward after contact, but are not big play threats. Murray would essentially serve the same function as Howard, except that Murray has proven to be much more durable.

Booker carried 145 times for 593 yards (4.1 YPC) and 2 TDs last season, playing in an absolutely atrocious Giants offense. He also chipped in 40 receptions, making him more of a receiving threat than a guy like Howard.

The three previous seasons (with the Broncos and Raiders), Booker averaged 4.8 yards per carry.

Howard began the 2021 season on the Eagles' practice squad, but after Sanders landed on injured reserve with an ankle injury suffered against the Raiders, Howard became the primary running back, and he responded with four consecutive strong performances in Sanders' absence:

Howard wasn't a big play threat, but he did a great job of seeing openings and running hard through them. He kept the Eagles on schedule on early downs, and he was able to pick up first downs in short yardage situations. Howard's success was probably a product of the dominant offensive line blocking in front of him. On another team he may not have been as effective. Nevertheless, his style worked in the Eagles' offense, and he's still available after workouts with the Saints and Steelers.

I should note that with all three options above (or any vested veteran like them), the Eagles would be unlikely to want to guarantee their 2022 salaries in full, so they would either (a) add a guy like that after Week 1, or (b) add one now, release them at 53-man cutdowns, and then bring them back after Week 1.

• Wait until final cuts: The Eagles could also simply wait until teams trim their rosters to 53 players, and add a bigger back at that time. Note to self: Write "Three released running backs who make sense for the Eagles" after cutdowns. Boom. #Content.

• Trade for another running back now: Meh, feels unlikely.

• Trade for a running back at the deadline: Jay Ajayi-style, if they look like contenders.