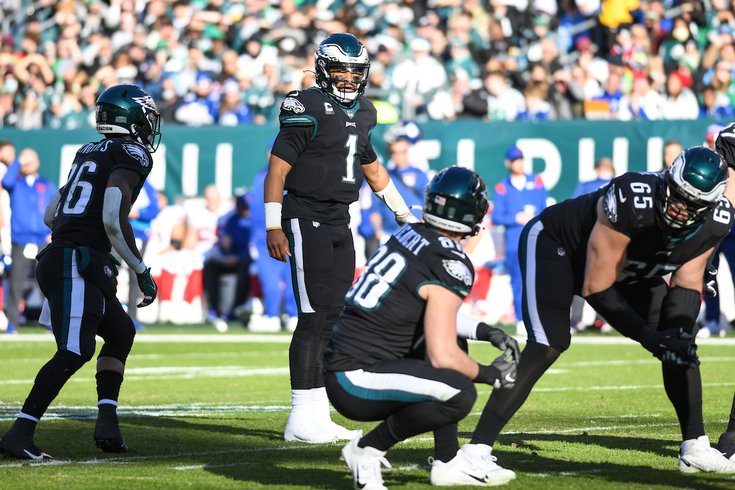 Eagles QB Jalen Hurts directs the offense during the game against the New York Giants.

Maybe you are a fantasy football nut (like me, who is in three leagues — one of them a dynasty). Or maybe you just love football because it's football.

Regardless, there is some value in taking a look at what various fantasy football resources say about the Eagles this coming season.

If Jalen Hurts is among the leaders in fantasy points for quarterbacks, that would obviously be a good sign for the Eagles. And the same is true for A.J. Brown and Dallas Goedert, who are each ranked highly at their respective positions. And what about Miles Sanders? Will he be a serviceable weekly fantasy starter at running back?

Here's look at what the leading fantasy football websites are predicting for the Eagles QB and skill players this season:

The range here seems about right — he's below the MVP candidates and above the non-rushing QBs. NFL.com has Hurts close to 4,000 yards which would be a second for the franchise (Carson Wentz did it in 2019). His rushing touchdowns will logically go down after he led the Eagles with 10 last season, but three of the four projections think he'll be pretty close. PhillyVoice ranks Hurts as QB8 this season.

Eagles fans are likely starting to really like NFL.com's optimism. After not scoring a touchdown last season, Sanders fantasy drafters would love to see him score seven this year, and would be more than happy with five or six. There seems to be a consensus that he'll rush for 1,000 yards but will not be a huge contributor in the pass game. Kenny Gainwell (as we have below) was ranked higher than Boston Scott and might be a late round handcuff pick for Sanders owners. We ranked Sanders 25th in our rankings and Gainwell 49th.

Did an Eagles fan infiltrate NFL.com's algorithm or something? If Brown hits his protected numbers via NFL.com he'll be the third leading single season receiver in team history. Brown will go in the first three or four rounds based on these rankings. We had Brown ranked 10th among WRs.

There is a consensus across the board that Smith will solidly post WR2 numbers and will go somewhere in the high single-digit rounds (between the sixth to the ninth). There might be more variance for those drafting Smith, as he's a big play threat who will likely see fewer targets per game than Brown will. We were a bit higher on Smith, slotting him 29th among wideouts.

It's interesting seeing Goedert range between the fifth and eighth best tight end. There is a clear drop off after eight and Hurts has been looking Goedert's way quite a lot in training camp. In games played with Zach Ertz, Goedert averaged 4.3 targets per game. In games without Ertz he averaged six. Perhaps he's going to rake in more targets this season? Goedert was our TE6.

It looks as though CBS is projecting that the Eagles muster a low sack total again. Assuming that number rebounds, their secondary is improved as is their linebacking corps. It's hard not to see the defense being, at worst, somewhere in the top half of the NFL. Our speculation is that they're the 12th best.

For some reason NFL.com's projections had Jake Elliott making just eight field goals which is... weird. But the other projections see him as a fringe kicker to be drafted (at least in 10 or 12 team leagues). He has a lot of accuracy — but he doesn't kick a lot, or at least hasn't in seasons past.