Michael Lombardi: Wrong and a dumb*** 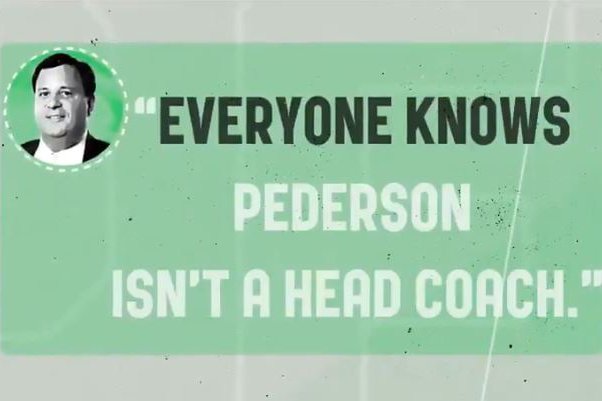 Michael Lombardi has been out of the NFL long enough that our photo provider doesn't have any pictures of him on file, so this will have to do, I guess.

September 3, 2017 was a bad day for Michael Lombardi. It was on that day that he unleashed a hot take that would make the surface of the sun jealous, that also backfired so gloriously that it will likely be remembered for as long as football is played in the city of Philadelphia.

Lombardi said on that day, "Everyone knows that Doug Pederson isn't a head coach. He might be less qualified to coach a team in the NFL than anyone I've seen in my 30-plus years in the NFL."

Go ahead and give it re-watch for old time's sake, keeping in mind that this person was somehow once the general manager of an NFL team.

154 days later, after a season-long masterclass of coaching, Pederson and the Eagles won the Super Bowl.

It was such a memorable take gone badly that in his legendary Super Bowl parade speech, Jason Kelce called Lombardi a "clown." So why are we bringing this up again? Well, you'd think that after unleashing literally the worst sports take in the history of a city, a fella might think to himself, "Eh, I should just not antagonize that city anymore or they'll probably bring up that monumental failure of mine."

If I were the Dolphins, I would ask why the Commissioner didn't fine or take draft picks away from Philadelphia for tanking the last game of the year in 20 and getting a higher pick. Tanking for one game is okay; talking about tanking isn't? Just wondering.

Lol, what?! Lombardi is of course referring to the Miami Dolphins' loss of a pair of draft picks earlier this week. In case you missed it, Roger Goodell docked the Dolphins future first- and third-round picks.

Except, uhhhh, the NFL punished the Dolphins for extreme tampering infractions, not tanking, with the following explanation from Goodell.

"The investigators found tampering violations of unprecedented scope and severity," Commissioner Goodell said. "I know of no prior instance of a team violating the prohibition on tampering with both a head coach and star player, to the potential detriment of multiple other clubs, over a period of several years. Similarly, I know of no prior instance in which ownership was so directly involved in the violations."

Dolphins owner Stephen Ross was also credibly accused of — but not punished for — pressuring former head coach Brian Flores of tanking an entire season, which, you know, isn't exactly on the same level as the time the Eagles were 4-10-1 and they did everything they could to lose a 2020 Week 17 game to the then Washington Football Team with their season already cooked.

It's like if the bank robbers in Heat got caught instead of killed, and in a sequel their lawyer was like, "Hey Judge, what about that 10-year-old who stole Skittles from 7-11? Huh? What about him, Judge?"