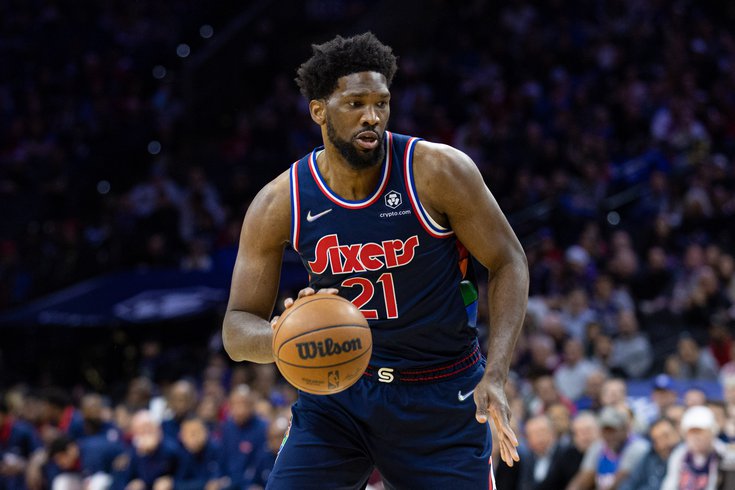 Joel Embiid stopped by 'The Late Late Show' studios to get some acting lessons from host James Corden while the Sixers were in Los Angeles last week.

Last week, the Sixers were in Los Angeles on a three-game West Coast trip, during which the team nabbed a pair of wins over the Lakers and Clippers.

While the 76ers were in town, Joel Embiid stopped by "The Late Late Show" studios to take some acting lessons with host James Corden. The segment aired during Tuesday night's show.

The sketch opens up with the All-Star center walking into Corden's office and telling the late night host that he wants to do some acting while in Hollywood. Embiid asks Corden if he could give him some acting advice.

"Are you kidding me? How dare you ask me something like that? So insensitive," Corden responds.

Embiid apologizes for apparently offending Corden, who tells the big fella that he was just acting. Corden agrees to become Embiid's personal acting coach. He instructs Embiid to follow him around for the day and to "be ready to act any moment."

Embiid is first tasked with playing a lonely librarian who is always chewing gum, which prompts him to slowly move his jaw up and down. Corden tells Embiid that his character has read every book in the library, except for one that he spots at the top of the bookshelf for the first time.

Corden then tells Embiid to go get the book. The NBA MVP candidate initially reaches for a different book, but Corden points to the book next to it. Embiid gets the book and brings it over to an impressed Corden.

"Is that it?," Embiid tries to ask, but Corden shushes him and whispers that "we're in a library."

The sketch then cuts to Corden trying to reach for a bag of potato chips at the top of a shelf in the office kitchen, but he can't grab them. Corden screams out for Embiid to come over and help him as part of another acting lesson.

This time, Corden is a sad, scared little boy, while Embiid is the boy's father who has been away on business for more than a year and is always chewing gum. The camera then cuts to Embiid chewing and making a confused face.

Corden tells Embiid that he must win back his son's love by getting the boy his favorite snack — the potato chips on the highest shelf.

"Daddy, I'm hungry and I'm scared and I'm sad and I need you to get me a snack!," Corden cries out.

Corden then points to the snack bar, and as Embiid seeks to grab him just any snack, the late night host goes between crying and pointing to which bag of potato chips he really wants. Embiid then grabs Corden a bag of sea salt chips.

"Wow. That was incredible," Corden says.

"I didn't even have any lines," Embiid says before he is sent off by Corden.

The segment then cuts to "The Late Late Show" set, where Corden is preparing for the show with his team. However, one of the lights is too bright for Corden and he asks if the crew can lower it. One of the production team members is unable to reach the light and says he has to get a ladder, which prompts Corden to call upon his acting apprentice.

Corden screams out again for Embiid, who walks out onto the set — albeit a bit less enthusiastic. The premise of Embiid's next acting scene is as a lighting guy. Corden describes the character as constantly scowling, recently divorced, always sleeping in his car and, yes, always chewing gum. Embiid then begins to do another fake gum chew while scowling.

The late night host tells Embiid to tilt the light down. The big man stares at the light for a moment, but finally realizes what Corden's intentions have been all along. It was just a ploy to use Embiid's height and long arms to reach things that Corden couldn't.

"Nah, I'm not doing that," Embiid says. "You're just using me to get stuff from high places. I'm outta here."

Corden tries to stop Embiid from leaving and admits to his scheme. He then tells Embiid about a movie deal he just signed for a fake buddy cop movie called "Long Arm and The Law," which he says is about a bumbling rookie cop and an experienced cop with really long arms.

Corden begins to try and describe the character, but is immediately cut off by Embiid.

Corden says Embiid's correct and that he's one of the two finalists for the part. However, in order to land the role, Embiid must clear a patch of cobwebs on the top of some lights. But Embiid has had enough at this point.

Corden tries one more time to stop Embiid from leaving but fails.

"If you don't do it, they're gonna give the part to someone else," Corden says as Embiid walks away.

The sketch ends with Corden calling the movie producers to tell them they have to go with Shaquille O'Neal for the part.

A post shared by The Late Late Show (@latelateshow)

You can watch the entire segment with Embiid and Corden below.