Australian philanthropists will help fund medical marijuana research, a cause that has affected their family, in the form of a multi-million dollar gift to Thomas Jefferson University, the school announced Wednesday.

Barry and Joy Lambert have agreed to donate $3 million to the Center City-based university's Institute of Emerging Health Professions in support of its Center for Medical Cannabis Education and Research. The center will be renamed The Lambert Center for the Study of Medicinal Cannabis and Hemp in honor of the donation.

“Joy and I were extremely impressed with Jefferson’s rapid progress in the field of medicinal cannabis research and innovative approach to exploring all avenues for new therapies to include using hemp derived cannabinoids,” Barry Lambert said. “We believe that solving big problems requires courage and big ideas, and that is what we’ve seen at TJU and in the United States where 21st century laws and scientific approaches exist to the use of hemp as a safe and effective source of medicinal cannabis."

In May, Jefferson established the center to provide evidence-based information and guidance to both doctors and patients about the uses of medical marijuana and cannabinoid-focused therapies. The effort is a first for a major health sciences university.

While medical marijuana can help treat a variety of conditions, Dr. Charles V. Pollack Jr., who heads the research team, indicated that further research would be beneficial to develop the best strategies for care.

“From the start we have had an ambitious agenda to elevate the science that underpins the therapeutic use of cannabinoids, and this donation provides a huge boost of momentum to pursue the most promising ideas and potential therapies for a range of conditions,” Pollack said.

Barry Lambert, 70, amassed his wealth in the Australian banking industry by founding Count Financial, a business that advises accounting firms. Recently, he has identified medical cannabis research as a philanthropic cause after his granddaughter, Katelyn, was treated with the drug. 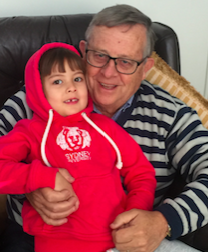 Barry Lambert with his granddaughter, Katelyn.

Katelyn was diagnosed with Dravet’s syndrome, a rare condition that affects the brain's signaling system and causes severe seizures. She was prescribed medical cannabis, which is one of a few therapies known to reduce seizures, and enjoyed substantial relief.

"We have directly experienced the miraculous life-saving benefits of medicinal cannabis derived from Hemp” said Barry Lambert. “We are confident that working under modern US regulations, TJU and its innovative, scientific approach will prove to the medical profession the benefits and safety of medicinal cannabis for a broad range of illnesses, not just childhood epilepsy."

Jefferson hosted a private ceremony Tuesday to celebrate the gift.