Philadelphia native Cory Anotado to appear as contestant on 'Jeopardy!' this week 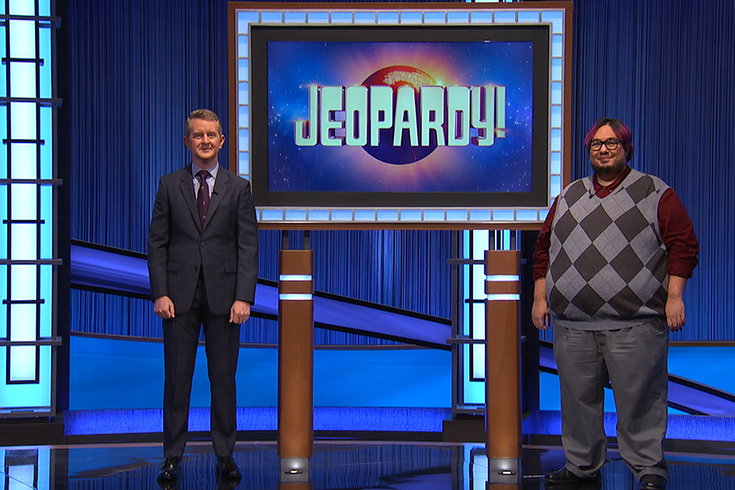 Cory Anotado's first interaction with 'Jeopardy!' champion and co-host Ken Jennings came during an interview for the latter's book in 2006.

Cory Anotado grew up watching hours of "Jeopardy!" with his grandmother in Philadelphia. Now, the La Salle University graduate is getting a once-in-a-lifetime opportunity to compete on one of his favorite game shows.

Anotado will be appearing as a contestant on an episode of "Jeopardy!" this Thursday, which will be airing at 7 p.m. on 6ABC.

Anotado, who now works as a creative designer for a marketing agency in Baltimore, will appear on the show with an attorney from Columbia, South Carolina named Clark Dawson. A third contestant will be determined based upon the results of Wednesday's contest.

The Philly native's love for game shows began as a child by watching "Jeopardy!," "The Price is Right," "Joker's Wild" and "Press Your Luck" with his grandmother Lilia.

He put his knowledge to use by creating a game show news website called BuzzerBlog in 2005. The website caught the attention of former "Jeopardy!" champion and current co-host Ken Jennings, who interviewed Anotado for his 2006 book "Brainiac."

Anotado said that Jennings remembered their call when the two reconnected on the "Jeopardy!" set in November.

Luckily for Anotado, he does bring some much-needed game show experience to Thursday's episode. He once appeared on a Jeopardy-like game show for kids called "Jep!" and competed on "Wheel of Fortune" when it traveled to Philadelphia in 2005.

Anotado and a pair of teammates took home a then-Game Show Network single-game record of $180,000 when they won an American version of the British game show "The Chase."

He said he's been preparing for his upcoming "Jeopardy!" appearance by reviewing trivia questions in board games and video games, as well as rewatching previous episodes.

“You understand how to parse what they’re looking for and how to do so very quickly," Anotado said. "It’s a whirlwind, but it’s something that can be practiced. Anyone can prepare for the show. Honestly, it’s more important to know what you don’t know. It helps you train and decide which categories to choose or avoid.”

When Anotado enrolled at La Salle in 2006, he was the first one in his family to attend college. He graduated from the school with a degree in digital art in 2010.

He compared the experience of being on the "Jeopardy!" set to standing on the grass at Lincoln Financial Field or Citizens Bank Park.

“When you walk on the 'Jeopardy!' set, your breath gets taken away by the beauty and just how grandiose it all is,” Anotado said. “On the stage, you’re a bit awestruck because it’s the place you see on TV. It’s where champions are born. It’s like walking on the grass at Lincoln Financial Field where the Eagles play, or Citizens Bank Park for the Phillies.”

Victory, however, could be a tall task for Anotado. His appearance on Thursday's show could very well coincide with the incredible run that contestant Amy Schneider has been on for the past two months.

Since November, the engineering manager from Oakland, California has won 30 straight games and accumulated over $1 million in winnings.

Schneider is the fourth player in "Jeopardy!" history to earn more than $1 million in non-tournament play, joining past champions like Jennings, James Holzhauer and Matt Amodio. But Schneider will need to win a 31st consecutive game Wednesday to face off against Anotado on Thursday.