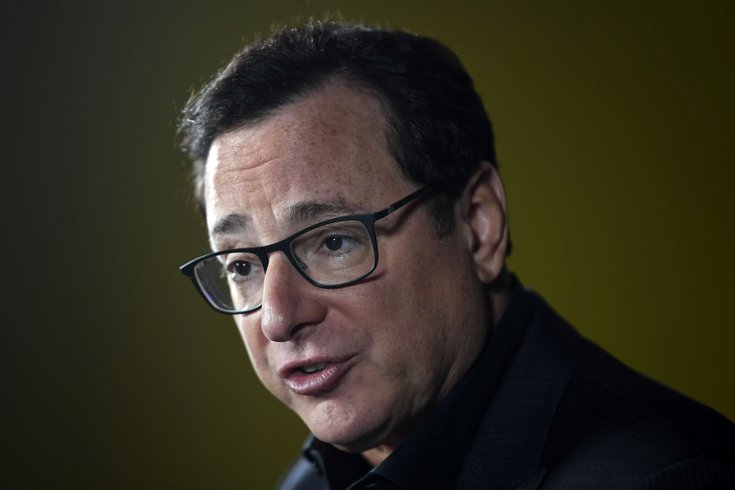 Celebrities have rushed to pay tribute to comedian Bob Saget, who was found dead Sunday in an Orlando, Florida hotel room. Jimmy Kimmel praised the 'Full House' actor for showing kindness and love to the people he met.

Tributes have poured in from actors and comedians in the wake of Bob Saget's death, but one of the most heartfelt and openly tearful was delivered by his friend Jimmy Kimmel at the start of his late-night show Monday night.

"If you read anything about Bob online (Sunday night), and if you saw any of the many thoughts from people who knew him personally, a word that came up a lot was the sweetest," the host of "Live" said, sobbing at times. "And Bob was the sweetest man. And the reason people wrote that was because it's true. It's the best word. If you had to pick one word to describe him, that's it. Sweetest."

Saget, a Montgomery County native who graduated from Temple University, died in a Florida hotel room on Sunday night.

"He was so funny," Kimmel said. "And I'm not talking about 'Full House' or 'America's Funniest Home Videos' or stand-up comedy or movies. I mean funny for real. Like when you walked into a party and saw Bob and his wife Kelly (Rizzo) in the corner, you'd go straight to them and stay for as long as you could because he had something funny to say about everything and nothing bad to say about anyone. If there were people he didn't like, he kept it to himself. He was a good person."

The late-night host said he reread old emails and messages as he reflected on Saget's life.

"I have so many wonderfully kind and supportive texts and emails and calls from Bob," Kimmel said. "He always had a compliment. He would write sometimes just to tell me he loved me and I know he did that for many people.

"Some (emails) were just funny, but some were very serious about life and the well-being of our children and how hard it is to appreciate one of those without the other being just right."

Kimmel encouraged fans to pay tribute to Saget by donating to the Scleroderma Research Foundation. Saget was a board member for the organization and frequently held fundraisers after one of his sisters died of scleroderma, an autoimmune disease that causes the tightening of the skin and connective tissues. Saget also directed "For Hope," a 1996 ABC television film that depicted how his sister became ill.

"He was very committed to finding a cure for this incurable disease that took his sister's life," Kimmel said. "And I know that if you want to remember him, there's nothing he would appreciate more than if you support SRF."

"I want to send love to his daughters, to his wife Kelly and to his friends who loved him so much," Kimmel continued. "He was very kind to everyone and he had no problem telling you that he loved you and what you meant to him. We love you Bob."

Television show host Steve Harvey appeared as a guest "Jimmy Kimmel Live." Harvey recalled that Saget was a very different person from the roles he played on TV.

"It's crazy because the dude you see on TV, that's not who that was," Harvey said. "Now this is a different dude off-stage. We both were. When we'd see each other off-stage, we'd just cuss each other out. He was an interesting guy. He was a great dude, man."

"Bob had the darkest sense of humor of any nice person I ever met," Kimmel said. "Shockingly dark. And not just profane, but also very twisted and very fun to experience."

Other celebrities have taken to social media in recent days to mourn Saget's passing.

I am broken. I am gutted.  I am in complete and utter shock.  I will never ever have another friend like him.  I love you so much Bobby.

Bob Saget was the older wiser ‘me' for nine years on How I Met Your Mother. He was the kindest, loveliest, funniest, most supportive man. The easiest person to be around. A mensch among mensches. 1/7

One of my fav memories of Bob was when I was babysitting his daughter. I was 15 & couldn’t get her to sleep/stop crying. Bob came home, took her in his arms, played a Tracy Chapman song & danced with her until she fell asleep. He was a wonderful Dad and human #RipBobSaget Love u pic.twitter.com/cYjb09AYV9

Beautiful Bob Saget passed away today at 65. He had a big, big heart and a wonderfully warped comic mind. He gave the world a lot of joy and lived his life for goodness’ sake. :’^} pic.twitter.com/QVSITsfaVj

Saget dead in an Orlando, Florida hotel room Sunday. He was 65. The medical officer in Orange County performed an autopsy Monday morning, the Associate Press reported.

"At this time, there is no evidence of drug use or foul play," Chief Medical Examiner Joshua Stephany wrote in a report from the Orange County Sheriff's Office. The full autopsy report is expected to take 10-12 weeks to complete.

Saget's room was found in order when hotel security went to check on him at the request of his family, who had contacted the hotel after being unable to reach him, according to the report. Saget's left arm was lying across his chest and his right arm was lying on the bed.

Saget had returned to his room around 2:20 a.m. Sunday, based information the hotel determine from his room key. He was declared dead around 4:20 p.m.

The Abington Senior High School graduate had just kicked off a new stand-up comedy tour last weekend in Florida. Saget's nationwide tour included a March date at the Keswick Theater in Glenside, Montgomery County, which he grew up just minutes away from.

Saget is survived by his wife Kelly and daughters Aubrey, Lara Melanie and Jennifer Belle Saget from a previous marriage.