A goat has gone viral for sounding exactly like a 'frightened Jerry Seinfeld' — what's the deal?

As Netflix brings a new wave of popularity for the sitcom, a few experts weighed in on the video's authenticity 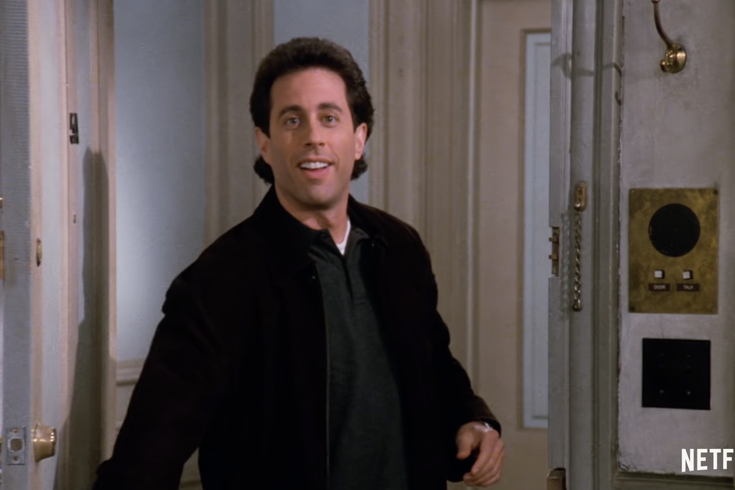 'Seinfeld' has catapulted into the top streaming titles since it arrived on Netflix in October. A viral video has been making rounds lately that shows a goat sounding suspiciously like Jerry Seinfeld when he's agitated. Goat experts say the video is legit.

Jerry Seinfeld was in the middle of the final season of his legendary NBC sitcom when he got the chance to enter the locker room of the NBA juggernaut Chicago Bulls and meet the great Michael Jordan.

Footage of the 1998 encounter was included in the hit Bulls documentary "The Last Dance," an archival gem that underscored just how big Seinfeld had become. He was indisputably the GOAT of his profession, just like Jordan, and had developed a style of comedy as distinctively his own as Jordan's signature tongue-out drive to the hoop.

"Seinfeld" never really leaves the cultural consciousness, but the series has undergone a glorious renaissance since it hit Netflix in October and became more accessible to the masses with a home on the No. 1 streaming platform.

People are binging and discussing "Seinfeld" like never before, both veteran fans of the show and newcomers discovering its genius for the first time, in a way that's more gripping than catching random episodes during syndicated time slots or owning the DVD sets.

This brings us to a video that first surfaced on TikTok in November and later found its way to Reddit on r/AnimalsBeingDerps. We knew Jerry Seinfeld was the GOAT of his era in comedy, but it appears he also shares something in common with literal goats.

The video above was originally uploaded by TikTok user Rebecca Pyle, aka @mommyfarmer, who has more than 1.7 million followers on the viral video platform. Pyle and her husband, Chris, live on Missouri's historic Twin Pines Farm and are known for sharing clips of animals who capture the spirit of farm life.

Someone who saw this video made the inevitable observation that the goat sounds eerily like Jerry Seinfeld whenever he gets worked up or animated — usually in reference to something objectionable that Kramer is doing.

There are countless examples of this throughout the series, but one of the best may be from "The Blood" episode of the ninth season when Kramer donates three pints of his blood to Jerry after a freak kitchen accident.

It also shows up a bit in "The Muffin Tops" episode of Season 8 when Jerry starts shaving his chest hair with Lady Gillette razors, only to learn from Kramer that it comes back thicker and darker.

Around Thanksgiving, I happened to share this video with some "Seinfeld" fan friends of mine. Most of them got a kick out of it like me, but one was convinced it couldn't be real. He thought the video had to be doctored in some way and that's it's just not possible a goat could sound that much like Seinfeld.

I told this friend that if I had some time before the end of the year, I'd do a little useless journalism and get to the bottom of it.

"In my humble expert opinion, I believe that to be the noise of a goat," said Nate Rose, an administrator at the nonprofit Philly Goat Project, a therapeutic sanctuary located in Germantown's Awbury Arboretum. "I would imagine that it's either a little annoyed or there's a show of dominance with the other goat. It definitely wants to be recognized for whatever is behind that gut-wrenching Seinfeld exclamation."

"Goats can make all sorts of terribly cacophonous sounds," Krivit said. "You can tell they are making those sounds because of their behavior, especially the tongues hanging out. They are demonstrating some mating behaviors. The videographer edited the sounds quickly enough to make them sound very Jerry."

Krivit explained that goats have a range of distinctive bleats that reflect their breed, age and personality. When the nonprofit got its first baby Nubian goats and they were separated from the herd for just a few minutes, the whining that followed caused a serious ruckus.

"They screamed so loudly that neighbors a block away were so sure that small children were in terrible danger that the 15th precinct was called to the farm for child protection concerns!" Krivit said.

Over at Rose Bridge Farm Sanctuary in Dresher, Montgomery County, Kristin Sutch also said she believes the Seinfeld goat video to be authentic.

"It is 100% a billy goat noise," Sutch said. "It's a way for him to either attract ladies or sometimes two males will do that to see who's the head of the herd."

Both the Philly Goat Project and Rose Bridge Farm Sanctuary hold regular events that give people a chance to spend time with goats, who are very friendly and loving animals.

"They make great pets," said Sutch, whose farm adopts goats out to spare them from becoming a meal. "We do goat yoga. We're going to start doing goat hiking with them. We do goat agility. They learn their names. They come when they're called. They can be trained just like a dog."

Sutch pointed to another viral video from a few years ago that shows a man having an "argument" with his goat, who makes noises similar to those seen in the Seinfeld goat video, albeit in a much higher pitch.

Krivit also sent me a video of a goat at her sanctuary doing much the same thing.

What makes the Seinfeld goat particularly wonderful is that its vocal cords seem to be just like Jerry's. That's probably because it isn't neutered, Sutch explained. Male goats are aggressive and stink to high heaven when they are still intact.

"All of ours are neutered, so if they're neutered or they're females, they're extremely sweet and kind," Sutch said. "They love to cuddle. They're very affectionate."

My stubborn friend and I did agree on one thing: Jerry Seinfeld needs to see this video.

In this day and age, celebrities and their publicists probably have Google alerts that let them know what's being written about them, right? It's hard to imagine Seinfeld spends much time on TikTok or Reddit, but he does have three kids who are between 16 and 21 years old. It's kind of their duty to make sure this video reaches their dad.

And what would Jerry Seinfeld say about all of this?

Maybe he'll laugh, or maybe he'll deny the similarity and take umbrage: But I don't wanna be a goat!