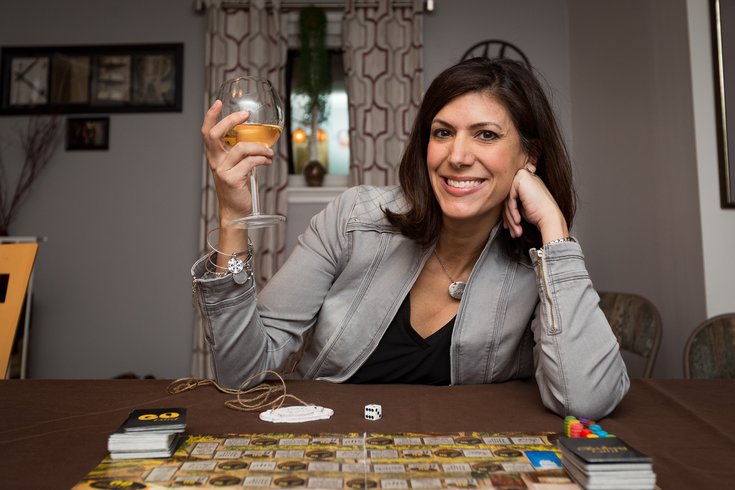 'Chardonnay Go' creator and South Jersey native, Dena Blizzard, is looking to take the success of her viral video and turn it into a board game.

Authentic Jersey girl Dena Blizzard has turned her likability, presence and timing into a career built around her comedic frustrations with – and silly celebrations of – being a suburban Philly wife and mom.

Come July 2, the one-year anniversary of the release of her insanely viral (23 million views, by Blizzard's count) video – Chardonnay Go – Blizzard hopes to add board game goddess (Chardonnay Go: The Board Game for Wine Lovers, Moms and Other Shameless People) to her seemingly random resume. 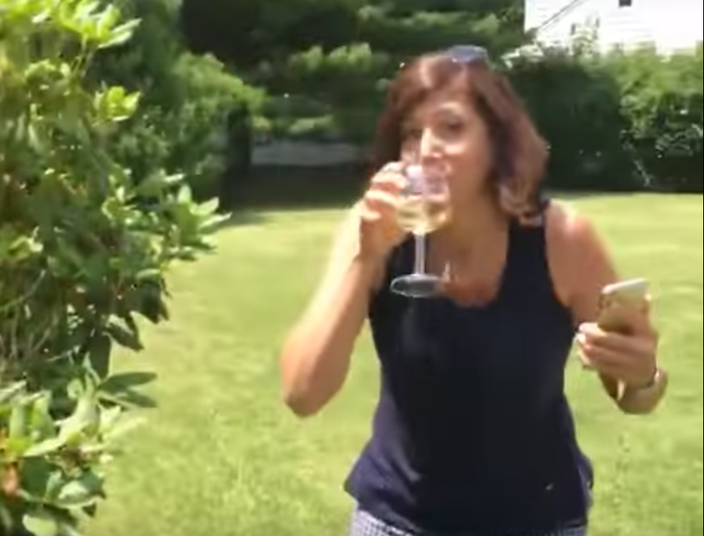 “My whole life seems random, but I understand it,” she concedes with a characteristic self-deprecating giggle.

Blizzard is in most things a happy medium: pretty, but approachable, tall, but not towering, fashionable, but at home in jeans, sexy, but not smoldering, funny and mildly dirty, but not over-the-edge outrageous.

Imagine if the cute wisecracking mom in the carpool had a career in comedy and you’ll get a sense of Blizzard, who manages to be serious about her work, without taking herself too seriously.

She attributes her take-me-as-I-am outlook to growing up in suburban Philly, specifically South Jersey.

Born in Jersey, raised in Jersey, schooled in Jersey, still a resident of Jersey, the 44-year-old Blizzard ticks off a list of what being a Jersey girl has meant at various times in her life.

“Oh, gosh, big hair, tanning, funnel cakes, big nails, but most of all a bad attitude,” she says.

By “bad attitude,” Blizzard means the “culture and attitude” of locals who feel free to express themselves without much of a filter.

“I was not a good pageant girl because of that,” she adds, mentioning she crashed the Miss New Jersey car during her beauty queen tenure and also had a creeper at one Miss NJ event lick her bare shoulder while her assigned chaperone was doubled over – laughing at her.

While her looks didn’t really work to her advantage in comedy – “I sort of look like a pageant girl” – the timing she learned performing classical piano pieces and the likability she polished while competing served her well when she began in stand-up. 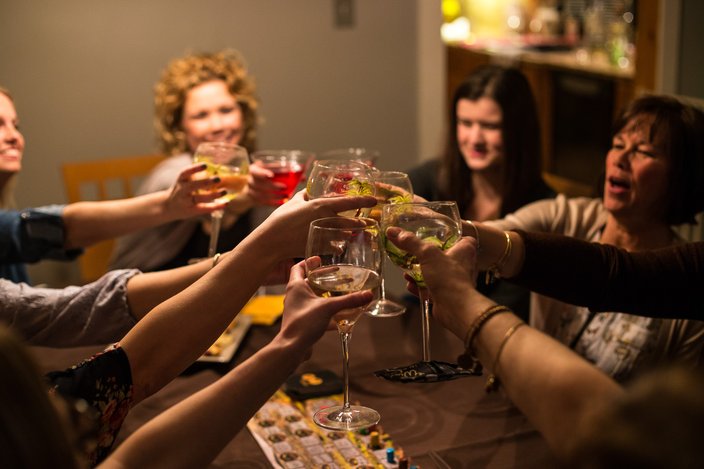 Players cheers with their wine glasses during a trial of the game on Feb. 18, 2017.

But she admits she was not a natural at being funny. She started with a comedy class for her 30th birthday, a gift from her husband, a remedy for the stay-at-home-mom blues she was feeling.

“I’m naturally shy, though I liked telling stories. But being funny on purpose was daunting. When I went on stage, I had no lofty ideas. My career has just sort of fallen into place. Stand-up, even if I sucked, was my safe space. It’s been very innocent and silly and wonderful.

“Either you buy (who I am) and you like it, or you hate me. Either is fine," she says of Philly audiences. "In general, that creates an artist who puts themselves out there. When I started out, audiences in Philly would shout ‘You suck’ or ‘Show us your boobs!'

“And then I went to New York to work, terrified, with the same show, and they were much nicer. But I like ‘Tell it like it is.’ So, I’m very Jersey, but I’m influenced by the whole Philadelphia region,” she explains.

“I mean, who would believe a dirty board game made by a mom in Wisconsin? But you say ‘Jersey’ and the reaction is, ‘Ah, that makes sense.” 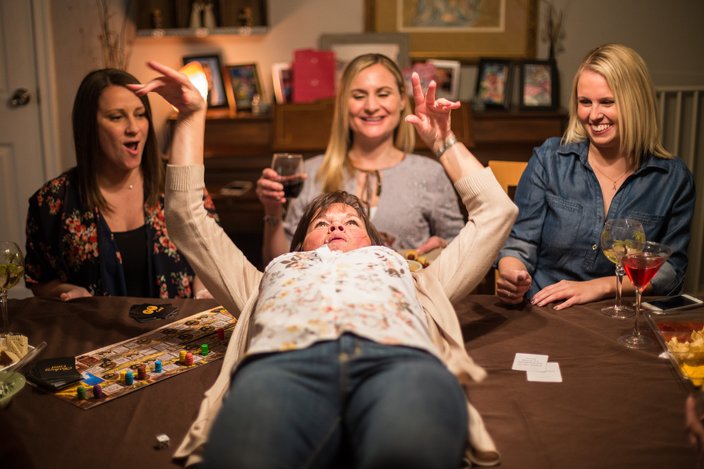 The game, which is currently in its beta stages, is currently being designed by Blizzard with the help of the makers of Cards Against Humanity.

The “dirty board game” is the aforementioned Chardonnay Go: The Board Game for Wine Lovers, Moms and Other Shameless People, the subject of a Kickstarter campaign closing on March 11.

The prototype board game – testing ends Sunday – is inspired by a three-minute long video Blizzard did and broadcast live last July.

She had no idea: after the first showing of the video, she turned once again to laundry and dishes as internet eyeballs kept accumulating.

In the video, Blizzard plays a caricature of herself as a stressed suburban mom hunting down white wine among friends and neighbors in her own Burlington County community.

The spoof is a grown-up riff on last year's Pokémon Go craze, because, as she says in the video, “Google wants you to drink!”

The staggering popularity her simple video – shot by her teenage son, aided by friends and neighbors – rang a bell.

“It was a happy accident. I followed my gut.” Blizzard had just closed her one-woman off-Broadway show and was “in a bad place,” casting about for her next project.

Creating a game based on women talking to each other – a skill she’d honed as a warm-up comic – led to the creation of a board game version of Chardonnay Go.

“It’s about learning how to make people feel comfortable. A play date for women. It’s like Candyland, but for adults, with drinking,” Blizzard explains of her board game.

“Women like the idea of running around like nuts, having fun – and drinking.” she explains with her trademark giggle.

She confides she has a friend in recovery who has played with other women also in recovery, while quaffing Dr Pepper. And they, too, had fun, she swears, this time without a giggle. 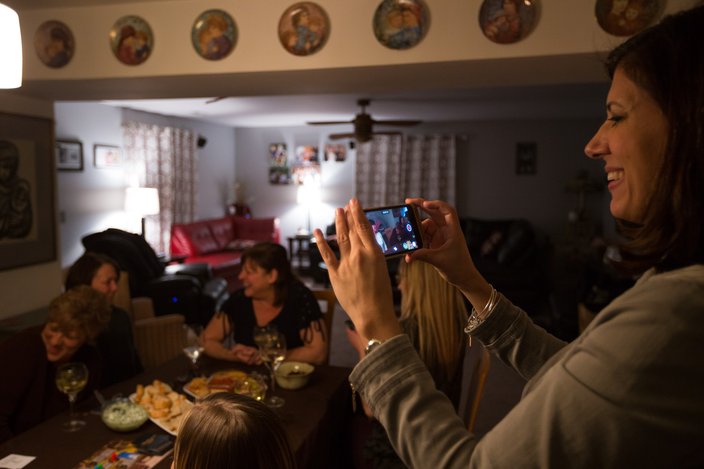 The 'Chardonnay Go' video currently boasts 23 million views on YouTube and was picked up by several news outlets.

Blizzard’s been testing out the game --14 copies are circulating around the country -- and gathering feedback while she gathers financial support and lines up a business partner.

She’s focused on the maker of the party games Cards Against Humanity and Exploding Kittens. She says she “stalked her” at a recent North American Toy Fair.

But she was floored when the executives of the third largest maker of toys in the world told her at the same trade show that its top executives had all seen her video.

“If this happens, I’m told it will be the first time a video became a board game,” she says. 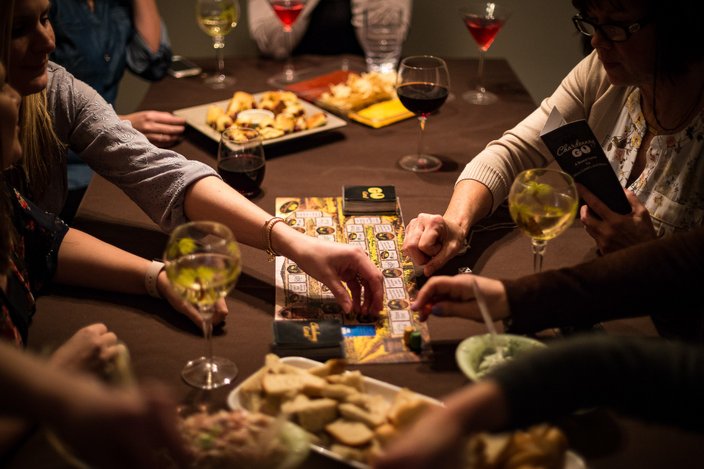 The 'Chardonnay Go' video was introduced as a spoof on the popular smartphone game, “Pokemon Go.” The Kickstarter page has rallied the support of nearly 100 people who want to see the game become a reality.

And so it came to be that Blizzard invited a male reporter and photographer with PhillyVoice to sit in on a recent test play night in Montgomery County hosted by Eileen Cosgrove Stehel and attended by nine members of her family.

Stehel was picked via Facebook, where Blizzard has a large and active presence.

Stehel had never met Blizzard before game night and never seen her perform, though her whole family plans of catching her show during a March run at the Bucks County Playhouse. She’s also now an avid watcher of Blizzard’s videos.

“I can relate to her. She’s absolutely approachable.”

“Oh, my God, it was hysterical,” says Stehel, who has always played games at holiday family gatherings and on vacations. “It was perfect for us girls.”

The game, aside from gathering a fair amount of wine, is fairly simple, with just a few rules:

• The last person who had sex goes first

• Take pairs of cards as instructed

• Perform challenges as directed on the cards

• Bad moves result in a timeout, turned away from the table

• Landing on the wrong spot makes you a “wine bitch,” meaning you top off glasses for everyone and wear a necklace of shame

• The winner is the first player to arrive at the end of the board, a wine tasting room

The card pair challenges are more silly than X-rated, though a player’s answers can easily veer in that direction.

• While licking your lips seductively and uncomfortably staring at the person on your right, name three slang words for sex

• While purring and rubbing your head like a cat on the person on your right, name three slang words for breasts

• While laying an EGG on the person on your right, name three famous people you want to have sex with

“It’s a reason to get together. It was written for women, but it is much funnier when men also play,” Blizzard says.

She hopes to have the game – packaged in a wine box, naturally – roll out at a $25 price point on the one year anniversary of the original video, July 2.

If you pledge $35 now on Kickstarter, you’ll get a game mailed to you. For $1,500 she'll drive as far as three hours to play the game with you in a public place  – "I don't want to be killed!" – as well as gift you with four copies of the game.

And for a $10,000 pledge, Blizzard will fly to your hometown on her dime, meet you near your house and play the game with you, as well as feature you on her site.

Oh, and if you pledge any amount of money, you'll also also earn Blizzard’s genuine gratitude, another hallmark of a genuine Jersey girl.