Jim Kenney starts Election Day where he grew up 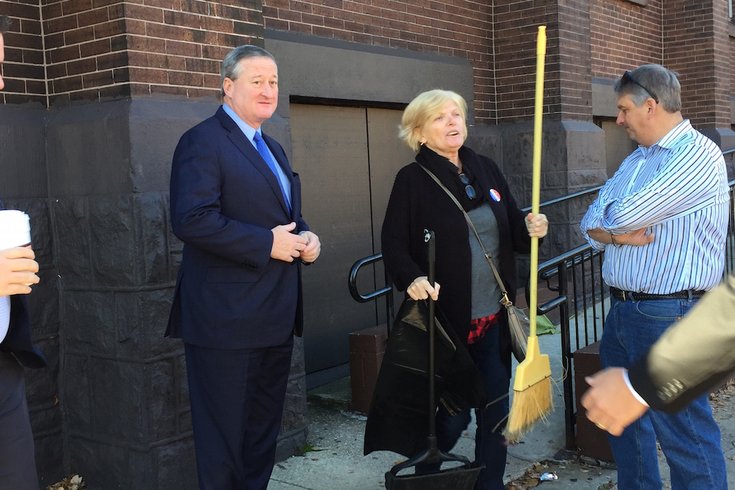 Jim Kenney stands outside a polling place near Third and Snyder streets in South Philadelphia on Election Day morning.

Jim Kenney has heard all about how today's Philadelphia mayoral election was likely decided when votes were counted for May’s Democratic primary, but that didn’t stop him from campaigning, debating and spreading his message for the past few months.

It also didn’t stop him from taking a Tuesday morning tour of polling places in the South Philly neighborhood where he grew up.

Sporting a blue suit and a smile, he started his day just after 8:30 a.m. at the Free Library of Philadelphia’s Whitman Branch at Second and Snyder streets.

There, he did an interview for a local TV station talking about the importance of people getting out to vote, not just in his race, but for the three-vacancy Pennsylvania Supreme Court contest featuring fellow South Philly kid Kevin Dougherty.

Heading over to polling places at Third and Snyder, Third and Jackson, Front and Ritner and Third and Porter streets, he met – in no particular order – childhood pals, former neighbors, old coaches and friends of his pop.

“I worked with his father,” said Bill Power, whom Kenney called “Scat” because that’s what the man was known as during his high-school football games of old.

“He’s a good man. You are,” Power said to Kenney while pinching his left cheek on the sidewalk outside a polling place.

“It’s a strange feeling. It’s really unexplainable. I’ve ran these streets, played in that playground, know all these people. It’s really humbling and remarkable that I’m in this situation.”--Jim Kenney, Democratic mayoral candidate

During this morning tour – which came before a get-out-the-vote rally with Dougherty in Center City and his scheduled 11 a.m. vote-casting moment in Old City – he received “early congratulations” messages and victory-party RSVPs.

“Whose sister is that?” he asked “best committeeman in the city” Kevin Carroll as a familiar voter walked away from the polls located next to the Crab House Saloon. “Lived on Third, across from the church. That’s Johnny McNulty’s sister!”

Kenney then spoke about how it was necessary, during an active campaign season, to start putting his probable mayoral cabinet together.

“Better off doing that than getting lazy thinking it’s a fait accompli,” he said.

Minutes after pretending he was going to climb a playground fence in his suit, he was asked about the unusual nature of walking around his childhood stomping grounds in the role of Likely Next Mayor.

“Bizarre,” he said. “It’s a strange feeling. It’s really unexplainable. I’ve ran these streets, played in that playground, know all these people. It’s really humbling and remarkable that I’m in this situation.”

Asked if he’s at all overwhelmed by the nostalgia of Election Day morning contrasts, he said he isn't, at least not yet. And why’s that?

“It hasn’t overtaken me yet. Haven’t cried yet,” he said, noting that he’s “sure he will at some point.”