The Democratic legislator represents the 191st District, which covers parts of Philadelphia and Delaware County

By Pat Ralph
PhillyVoice Staff
Government House of Representatives
from 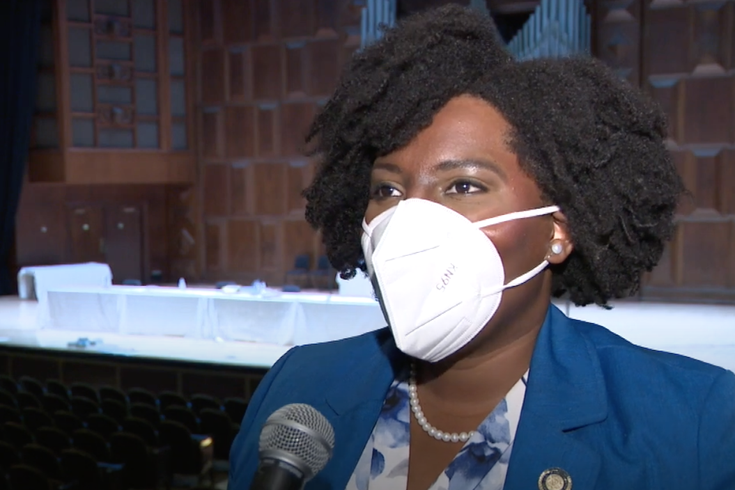 Rep. Joanna McClinton has chaired the Democratic caucus in the Pennsylvania House of Representatives since 2018. She will soon become the minority leader.

State Rep. Joanna McClinton became the first Pennsylvania woman elected to serve as a minority leader in the General Assembly.

The 90 members of the Pennsylvania House of Representatives' incoming Democratic caucus voted Thursday to install McClinton in the role when the 2021-22 legislative session gets underway.

McClinton has represented the 191st District, which encompasses parts of Philadelphia and Delaware County, since 2015. She has chaired the Democratic caucus since 2018.

"I am truly grateful to my colleagues for making such a historic decision," McClinton said. "I would like to think it has nothing to do with the fact that I’m a woman or that I’m an African-American, but because I’ve worked hard for years.

"I look forward to going back into the capitol and making sure we fight for working families," she continued. "Make sure that we fight to fund our public schools. Make sure we fight for jobs and also to protect our environment. The work ahead of us is serious, but together we can make a difference for Pennsylvanians."


McClinton will replace Frank Dermody, of Allegheny County, who lost to his Republican challenger, Carrie Lewis-DelRosso, in the general election. Dermody had spent three decades in Harrisburg, including 10 years as minority leader.

Before entering politics, McClinton spent seven years working as an assistant public defender in Philly, having earned her law degree from Villanova University.

McClinton will not be the only Philly-area state representative serving in a leadership position during the next legislative session.

Rep. Jordan Harris was re-elected to his role as Democratic Whip. He has represented the 186th District, which encompasses parts of Philly, since 2012.

Rep. Matt Bradford earned another term as the Democratic appropriations committee chairman. He has represented the 70th District, which includes parts of Montgomery County, since 2008.

Rep. Tina Davis, who has represented the 141st District since 2010, was elected as secretary. Her district includes portions of Bucks County.

On the Republican side, State Rep. Martina White was elected as secretary of the House Republican caucus. She represents the 170th District, which includes parts of Philly.