Joel Embiid doubtful for Game 5 vs. Wizards as knee continues to be evaluated 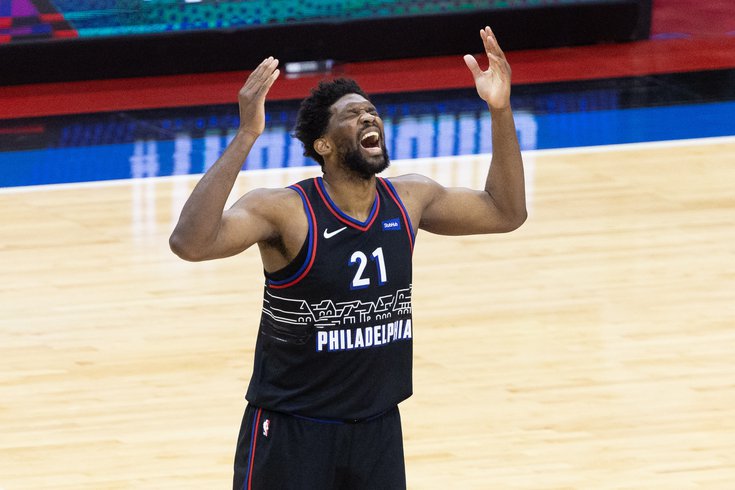 Joel Embiid does his best impression of Sixers fans when they heard he's doubtful for Game 5 against the Wizards.

Joel Embiid is doubtful for Wednesday's Game 5 against the Washington Wizards, as Philadelphia's franchise player continues to undergo evaluation for a sore right knee, a team official said on Tuesday evening. The big man's status was first reported by ESPN's Adrian Wojnarowski.

Philadelphia's franchise center has undergone all his imaging as of late Tuesday afternoon, with a source close to the situation saying the medical team needed to go over the results before making any sort of official diagnosis or statement on the matter. To some degree, the latest update was forced by league guidelines — the Sixers were required to submit a report for tomorrow's game by Tuesday's 5 p.m. deadline, and were only comfortable calling him doubtful for the time being as they figure out where to go from here.

The good news, a source close to the situation told PhillyVoice, is that the Sixers feel good about the ability to manage Embiid's health from a long-term/overall playoff perspective. Information beyond that, though, has been murky.

The path to evaluating Embiid was complicated slightly as a result of travel issues for the Sixers overnight. NBC's John Clark reported on Tuesday afternoon that the team's charter plane broke down overnight, forcing the team to arrange a bus trip back to Philly in advance of Game 5. That trip didn't end until around 6 a.m. on Tuesday, and it slowed down the process a good bit.

Information on Embiid's status has been hard to come by since he went down early in Monday's loss to the Wizards, with Doc Rivers confessing after the game that he wasn't even sure what was wrong while in the middle of the game. His absence was felt big time, as Rivers shuffled through ineffective lineups and looks trying to find a combination that works. His teammates felt Embiid's absence in a big way, with Ben Simmons and other Sixers commenting after the game that their offense bogged down after losing him.

“Once Jo came out, I don’t think we were moving the ball as well,” Ben Simmons said Monday. “We weren’t playing team ball for a minute and then also not getting stops which is a huge part of our offense in order to be able to push the ball which hurt us for a little bit.”

"Obviously, we need Jo to win," Simmons added later. "He’s a big part of this team, but if he’s not there the next game, we got to close it out. We got what we need.”

Wednesday's game in South Philadelphia will be the first time a full capacity crowd can attend a Sixers game since before COVID-19 lockdowns. Though their MVP candidate has not technically been ruled out yet, it appears for now that the Sixers will have to try to close out this series without him.